Michael, honorary board member of the foundation and recipient of the 2019 Outstanding Service Award.

What is the mission of the Donald Berman Maimonides Geriatric Centre Foundation?

The Donald Berman Maimonides Geriatric Centre is funded by the government, as all hospitals are. However, the funding is often insufficient for the institution to elevate the quality of care and services for their patients (seniors who are unable to care for themselves). The Foundation, with which I’ve been affiliated for over 15 years, strives to bridge the gap by funding a variety of programs and activities. For example, the residents are invited to take technology lessons and learn how to communicate with relatives that might live out of town. Other times, someone will come in and play songs that this generation used to listen to on the piano – many patients of the institution have Alzheimer’s disease and dementia, but they can still recollect memories from many years ago of these songs.

The Foundation also funds research to find new treatments for diseases that are common amongst the elderly. As our seniors are getting older, the number of patients who are suffering from conditions like Alzheimer’s disease is increasing, and there’s been very little advancement in the last few decades in understanding and treating this disease. The Foundation started a program and hired a research medical director. The director as part of their job function also write grants to help the advancement of knowledge in order to provide better care for the residents.

Giving someone who is ageing the dignity that they deserve in their senior years is fundamental, and that’s what they do at Donald Berman Maimonides. They provide the seniors that extra level of compassion and elevate patient care to what we believe is the next level.

“Giving someone who is ageing the dignity that they deserve in their senior years is fundamental.”

How did you come to be involved with the Donald Berman Maimonides Foundation?

At the age of 95, my grandmother needed some additional care and therefore became a resident at Donald Berman Maimonides Centre. She stayed there for four years, and I learned more about the institution in that time. In the Jewish community, you get known very quickly if you are successful in fundraising. After my grandmother became a resident, it didn’t take long before I was asked to join the board of directors. After nine years or so, I became president as the organization needed the skill sets that I excelled at. During my tenure we launched the sweet dreams campaign where we raised in excess of 6.5 million dollars to redo all of the resident rooms to make them state of the art. The Foundation wanted me to continue serving on the board, but I believe that every organization should have term limits to ensure its sustainability by bringing in new people with fresh ideas. Now I am happily serving the Foundation as an honorary board member.

As a former president of the board, what kind of legacy did you leave behind?

Four years ago, I discussed with Karen Flam, the executive director of the Foundation, to determine how I could leave an impactful legacy gift. Together, we found a way to match this wish with one of my passions, which is higher education. With the ability to learn comes the ability to earn a decent living. However, for a lot of these employees, it’s difficult to fund their children’s education. Therefore, I funded an endowment to provide an annual scholarship for a child of one of the institution’s employees in post-secondary education. Any employee’s child that wants to apply for this grant has to write a motivation letter that I will review. Reading those letters is deeply touching: their stories are heartwarming, and I wish I could give everyone a scholarship! Some of the employees are single parents, and they often brought their kids to work, who therefore almost grew up in the institution. They saw first hand that caring for seniors is very special. Every year, I will determine who the recipient is in conjunction with the Foundation. We awarded the first scholarship two years ago, and we received twice as many letters in the second year. The legacy will continue when I’m no longer here, as my children will take over the selection process of the new recipients.

What have you learned from your involvement?

You always learn lessons in community involvement, and this is very near and dear to my heart. I could even say it’s in my DNA. The Corber family is known as a family who gets involved on two levels, both of giving their time, and in philanthropy. I grew up in a household where it was not an option: you chose a charity that meant something to you, and you got involved. Over the last 35 years, I’ve been involved in several charities: some just as a participating board member, others where I’ve elevated myself to presidency. I’ve recently celebrated my one-year anniversary as chairman of the board of the Goodman Cancer Research Centre at McGill University. These are initiatives  that inspire me and continue to push me to do better in all that I do, and  invigorate me to work harder here at Richter to be able to give back even more than I do to a community that has provided me with the platform that allowed me to do what I have done for almost four decades. You get a tremendous amount of satisfaction in helping those in need and seeing that first hand is very impactful. 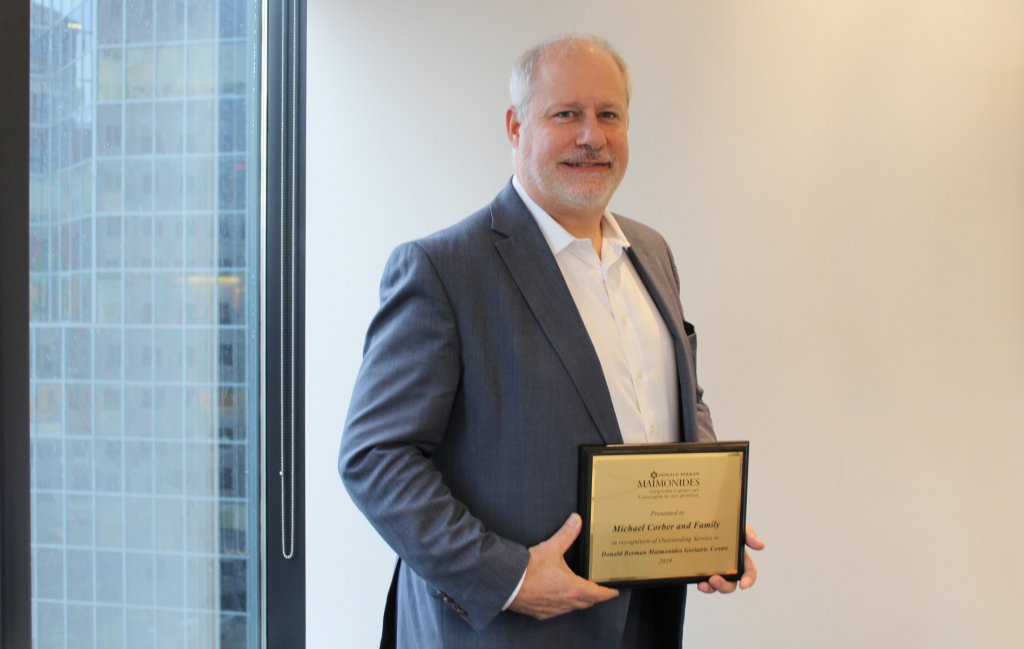 Can you tell us more about the Outstanding Service Award that the Foundation recently awarded you?

Of course! The Outstanding Service Award is presented to a recipient every year at the annual general meeting for outstanding leadership, involvement and dedication to the Donald Berman Maimonides Centre. It’s very humbling to receive such an award because I don’t do any of my charitable endeavours ever expecting anything in return. On the contrary, I do it to make other people’s lives hopefully richer, better and more meaningful and comfortable. Although I accept the award very graciously, I think that I’m just doing the work that I was set out to do. I will hopefully continue to do more for this institution and others, and make our world a better place.