The surveyed banks again were expecting that, with improving global economic conditions and tightening oil supply, the Canadian dollar would enjoy some tailwinds and strengthen. However, this has not been the case as the Bank of Canada (“BoC”) has opted to turn more dovish, recently hinting at the April 24 announcement that low rates could persist. National noted that the spread in the Canada-U.S. interest rates has not been this wide since 2007, but unlike in 2007, the CAD’s weakness today is attributable to weak foreign inbound investments, rather than a robust outbound investments.

The Fed has announced that there will be no additional rate hikes in 2019 and therefore confirming that the originally predicted second rate hike will not occur. This is good news for the relative strength of the Loonie since the spread between Canada-U.S. interest rates isn’t expected to widen any further for 2019. Unlike the BoC, the Fed’s dovish stance had no material impact on the Greenback given the highly anticipated announcement. Steadily, the Greenback has continued to strengthen despite the deterioration of global economic conditions. Overall, the surveyed banks are in consensus that the currency pair should trade in the range of 74.0 and 81.3 US¢/CAD through Q4 2020.

On April 10, European Central Bank (“ECB”) President Draghi announced that the bank expects its key interest rates to remain at present levels through the end of 2019 and for as long as they see necessary.[1] Draghi highlighted that data gathered since the early March meeting confirmed the “slower growth momentum” for the Euro zone area. Factors attributable include the uncertainty regarding the persistent geopolitical factors and the threat of protectionist trade-policy.

RBC believes the ECB will hold rates steady until the middle of 2020 and any tightening thereafter will be gradual. As a result of the slowdown for the Euro zone, most banks have adjusted their EUR forecasts downward. Scotiabank highlighted that soft growth and inflation are likely to persist and expects a delay in the strengthening of the EUR. National has also trimmed their EUR predictions given the elevation of headline risks such as Brexit and the upcoming European Parliament Elections. Overall, the surveyed banks are anticipating the EUR will trade between 60.2 and 65.8 EUR¢/CAD through Q4 of 2020.

BoC and Fed expected to hold steady for 2019

The BoC held its key interest rate steady in March and April. RBC noted that in the central bank’s March statement there was no mention of a tightening bias which was confirmed by the April announcement. Most of the surveyed banks have trimmed their forecasts and expect the BoC to deliver its first rate hike in 2020 with the exception of Scotiabank who has tabled a rate hike for Q4 of 2019. Scotiabank highlighted that the soft patch in Canada is temporary and believes in above-potential growth for Canada in Q2.

The Federal Reserve Open Committee (“FOMC”) statement released on March 20 noted that the current rate setting would be sustained for the remainder of 2019. RBC highlighted that the Fed’s comments were more dovish than expected and growth and inflation forecasts were marked downwards, with the unemployment rate revised slightly higher. Overall, the surveyed banks largely forecast that the overnight rate of 1.75% and the Fed target range 2.25% to 2.50% (2.375 midpoint) will hold steady through next year. 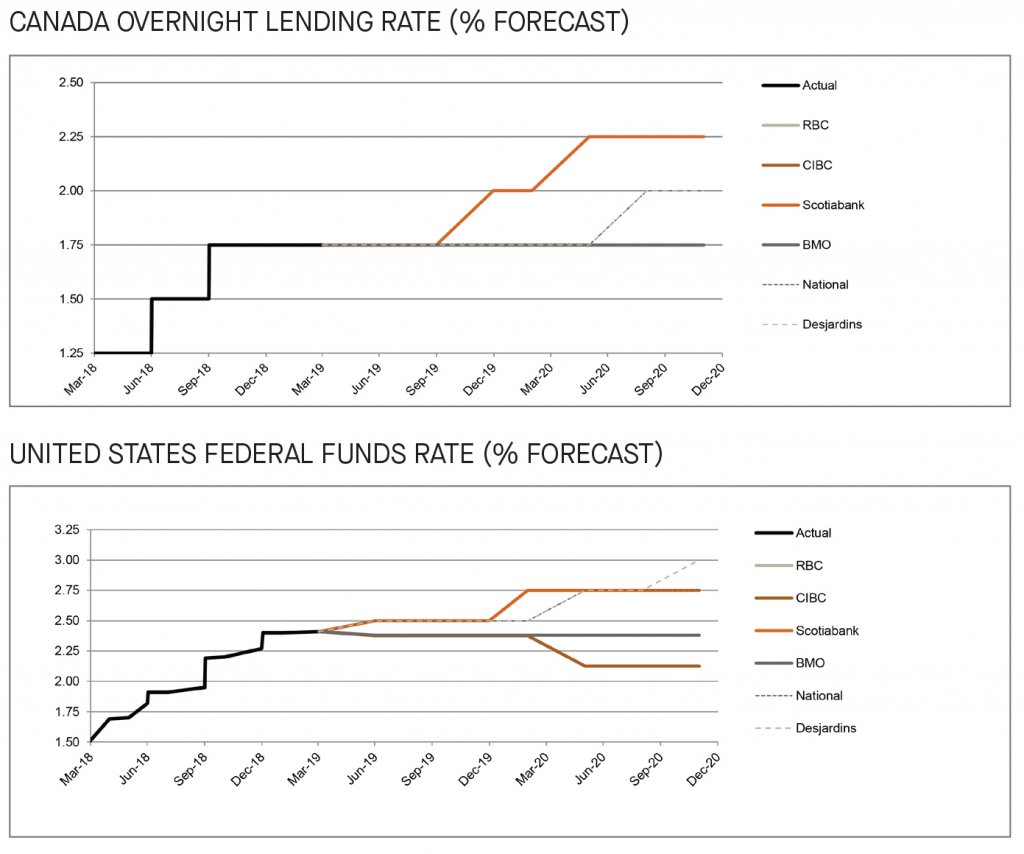 As at the date of publication, the 2-year government bond yielded 1.6% and 2.4% in Canada and the U.S., respectively. Despite recent yield pressures, most surveyed banks continue to predict an upward sloping yield curve for both Canadian and the U.S bonds and believe the yields should progressively rise through to March 2020. However, CIBC has noticeably forecasted fluctuations for both U.S. and Canadian short-term bond yields as it predicts both the BoC and Fed to stay on the sidelines in regard to monetary policy tightening for the remainder of 2019. Overall, the 2-year government bonds are forecasted to yield between 1.5% and 2.3% in Canada and 2.4% and 3.0% in the U.S. by the end of 2020. 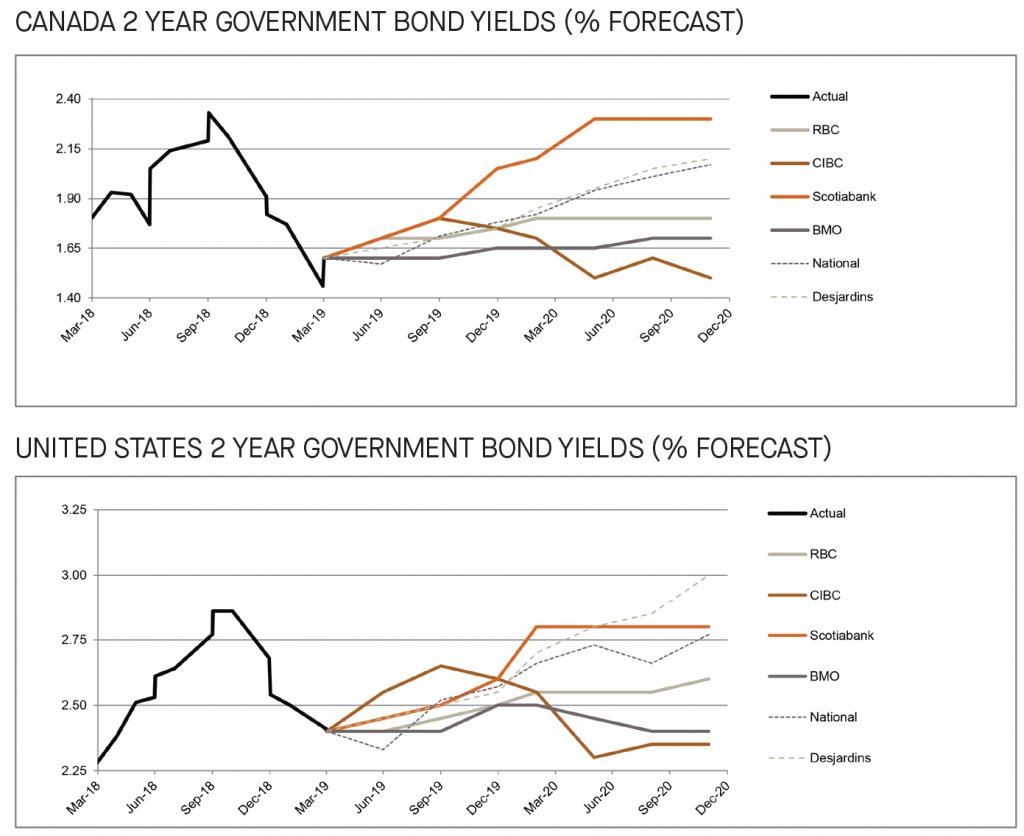 Inverted yields a historical signal for recession; RBC argues otherwise this time around

Both U.S. and Canadian 10-year government yield curves inverted for the first time since 2007 as they fell below short-term yields (3-months) late last month, sparking a conversation of a possible recession looming. Historically, economists have pointed to inverted yield curves as leading indicators of incoming recessionary economic environments. RBC addressed this concern by highlighting that there are current complexities such as structural and global factors which make the inverted yields a less accurate predictor of a recession this time around. Most of the surveyed banks, except for CIBC and BMO, continue to believe that the U.S. 10-year yields will gradually increase above 3% through 2020. Overall, the banks lack consensus as to the trend of the 10-year government bond yields, expecting them to yield between 1.7% and 2.5% in Canada and 2.4% to 3.2% in the U.S. by the end of 2020. 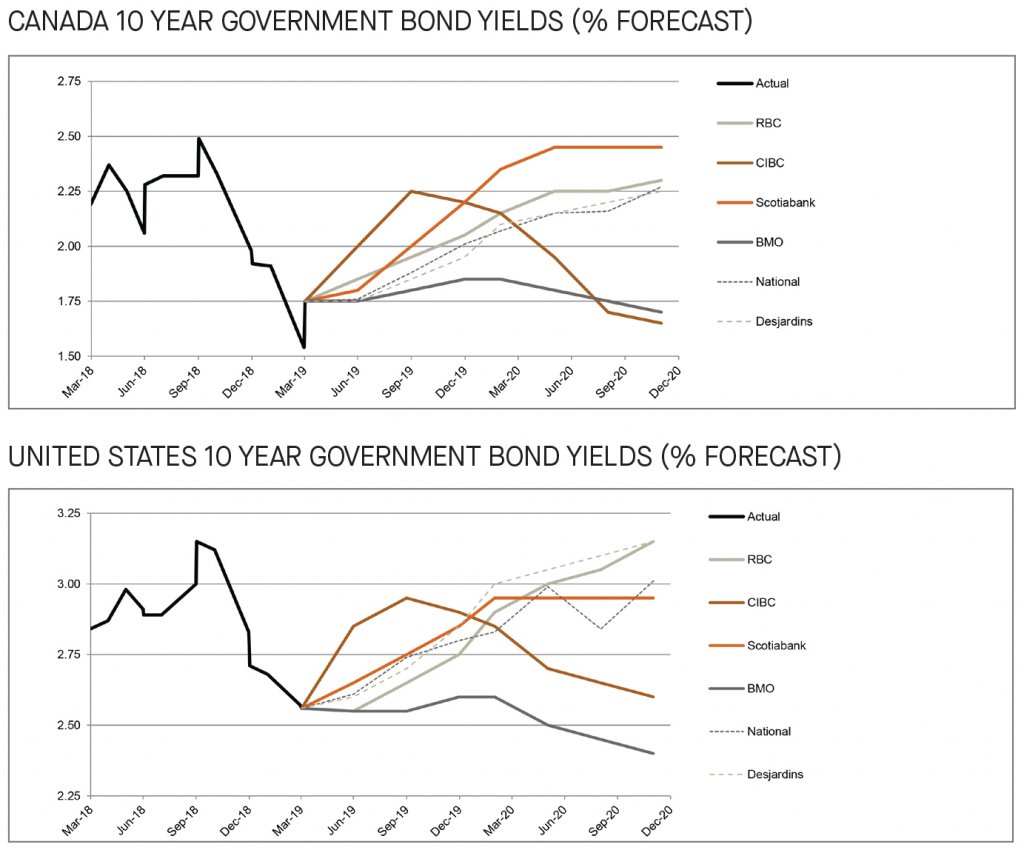 Long-term bonds downwardly adjusted in both Canada and the U.S.

Compared to last month’s publication, the long-term bond yield forecasts have been revised downwards by all of the surveyed banks. Consistent with previous monthly surveys, the forecasting banks are in consensus that long-bond yields will steadily rise through to end of 2019. Scotiabank is on the high end of the Canadian forecast, while RBC is on the high end of the U.S. forecast, expecting the long bond yields to rise to 2.8% and 3.6% by the end of 2020, respectively. 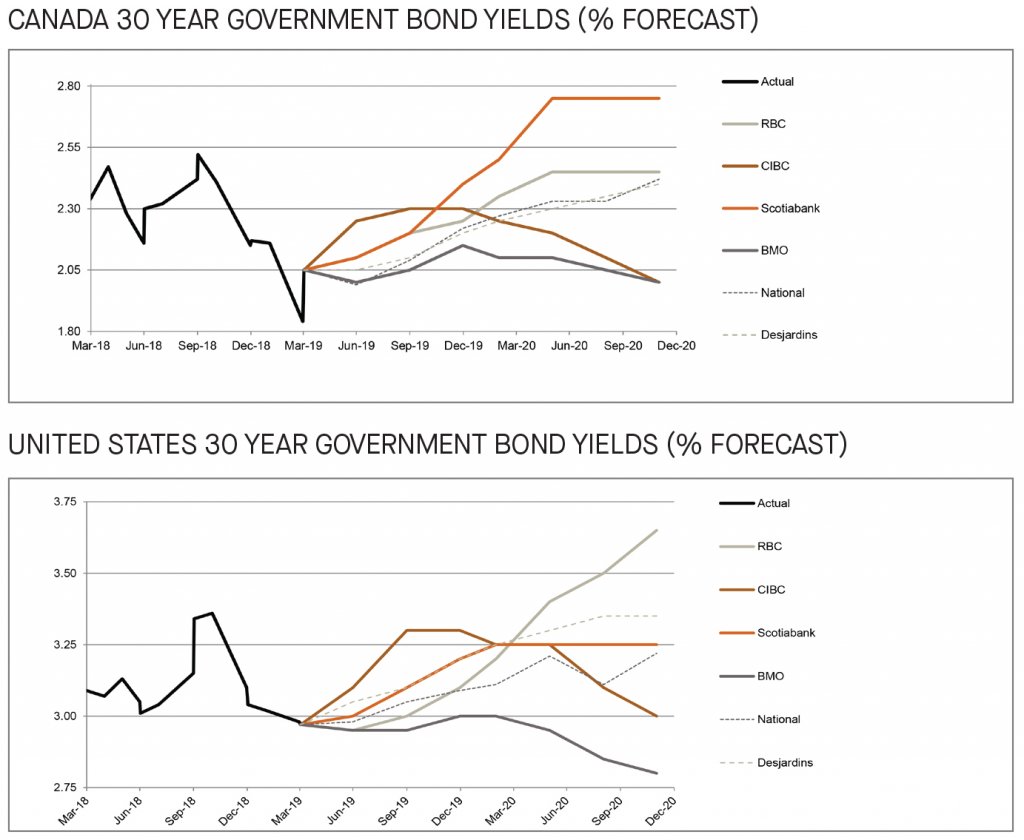 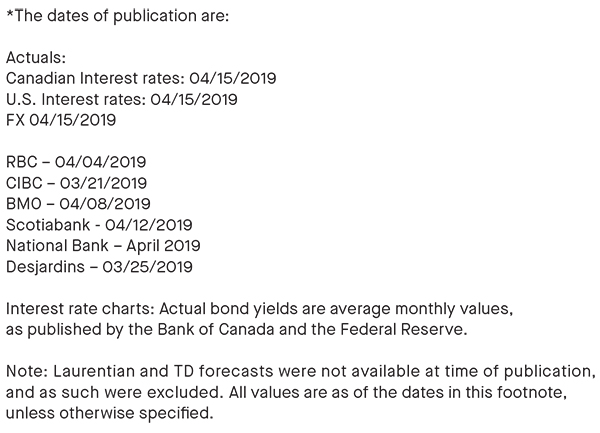