The weeks since our July publication have been eventful. The most notable development that exerted downward pressures on the global economy is the tit-for-tat escalation in the U.S.-China trade conflict. This came on the same day as Federal Reserve (“Fed”) Chair Jerome Powell delivered his speech at the annual monitory policy symposium. Chair Powell explained that the global growth outlook has been deteriorating since the middle of last year, adding that geopolitical factors, including tariff escalation between the largest economies, had created a complex and turbulent picture. Chair Powell highlighted that that the Fed will act as appropriate to sustain the expansion, with a caveat that while monetary policy is a powerful tool, it cannot provide a settled rulebook for international trade. The rhetoric from Powell suggests that President Trump’s trade policy may necessitate further interest rate cuts. This evoked a rather strange reaction from President Trump, stating that the Fed is “weak” and “did nothing”, further criticizing Chair Powell and characterizing him as an “enemy” of the United States.[1]

In Canada, the CAD strengthened against its U.S. counterpart in light of stronger than expected domestic inflation data. Further, the housing market is strengthening, wage growth is strong and Q2 GDP report is on track to rise by about 3%, well above the 2.3% forecasted by the Bank of Canada (“BoC”). All this supports the consensus amongst the surveyed banks that domestic conditions do not warrant a rate cut by the BoC. However, as noted by Scotiabank, Canada cannot be immune to the rising tide of global protectionism. Overall, the surveyed banks see that the CAD has room to strengthen against the USD, anticipating the currency pair to trade between 75.2 and 77.0 USȼ/CAD by the end of 2020.

Since last month’s publication, we have seen further evidence of economic slowdown in the Eurozone where GDP growth slipped lower to 0.2% in Q2 (from 0.4% in Q1). Notably in Germany, the manufacturing PMI sank to an 84-month low in July, and the country appears to be heading into its first recession in six years, demonstrating the extent of the damage in Europe’s largest economy. Additionally, a growing possibility of a hard Brexit and an Italian government crisis add further pressures which temper any growth forecasts. With that, the European Central Bank (“ECB”) is expected to deliver additional stimulus in September, likely weakening the EUR as a result.

RBC noted that the ECB laid the groundwork for additional policy measures, such as restarting QE and moving to a tiered system for deposit rates. CIBC highlighted that the markets aren’t impressed with what the ECB can deliver and would cheer a fiscal ease by one country that can afford it, specifically Germany. National added that the Eurozone’s weak economic growth and monetary policy loosening do not bode well for the EUR, with a caveat that the currency may perk up temporarily as a result of a weakening USD. Overall, given the Eurozone’s persisting economic woes, the relative outlook is positive for the CAD; with the currency pair expected to trade between 65.4 and 68.6 EURȼ/CAD by the end of 2020.

In Canada, the surveyed banks are in consensus that the BoC will remain on hold until 2020, with the exception of Scotiabank who penciled in a rate cut on October 30th citing increased downside risks to the global economic environment. In the United States, as widely anticipated, the Fed lowered its key interest rate by 0.25% on July 31st, for the first time since December 2008. Chair Powell indicated that the cut was a “mid-cycle” adjustment in response to increased trade risk and weak inflation rather than the beginning of a long period of monetary easing.[2] RBC highlighted that investors are not persuaded by Chair Powell’s guidance given the recent escalation of the U.S.-China trade war, and are consequently pricing in further cuts. Overall, the surveyed banks lack consensus as to whether the Fed will deliver further rate cuts in the remainder of 2019 or in Q1 of 2020. 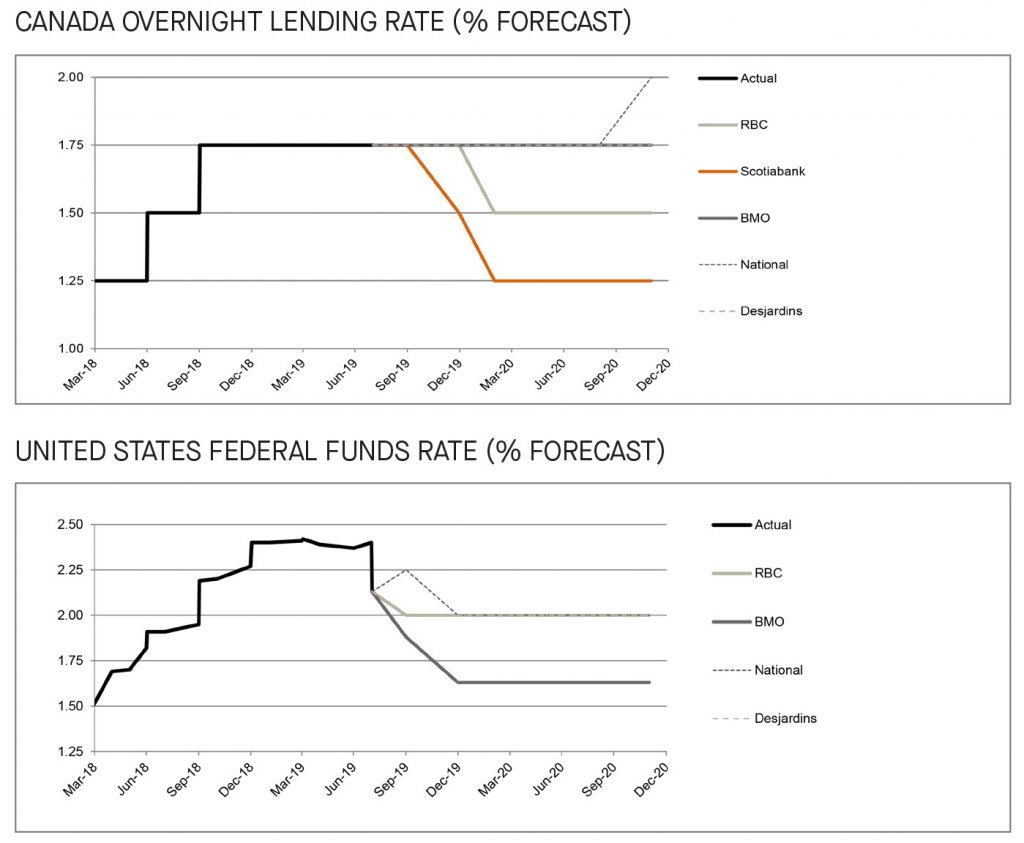 Compared to last month’s publication, we observe downward adjustments made by most of the surveyed banks for both the Canadian and U.S. short term bond yields. Since early August, Desjardins noted that U.S. President Donald Trump’s new tariff announcement on Chinese goods has caused major downward pressure on bond yields. In Canada, Desjardins noted that there should be a slight rise in bond yields if the BoC keeps key interest rates unchanged. By Q4 of 2019, the surveyed banks forecast that the 2-year government bonds will yield between 1.3% and 1.7% in Canada and 1.7% and 1.9% in the U.S. 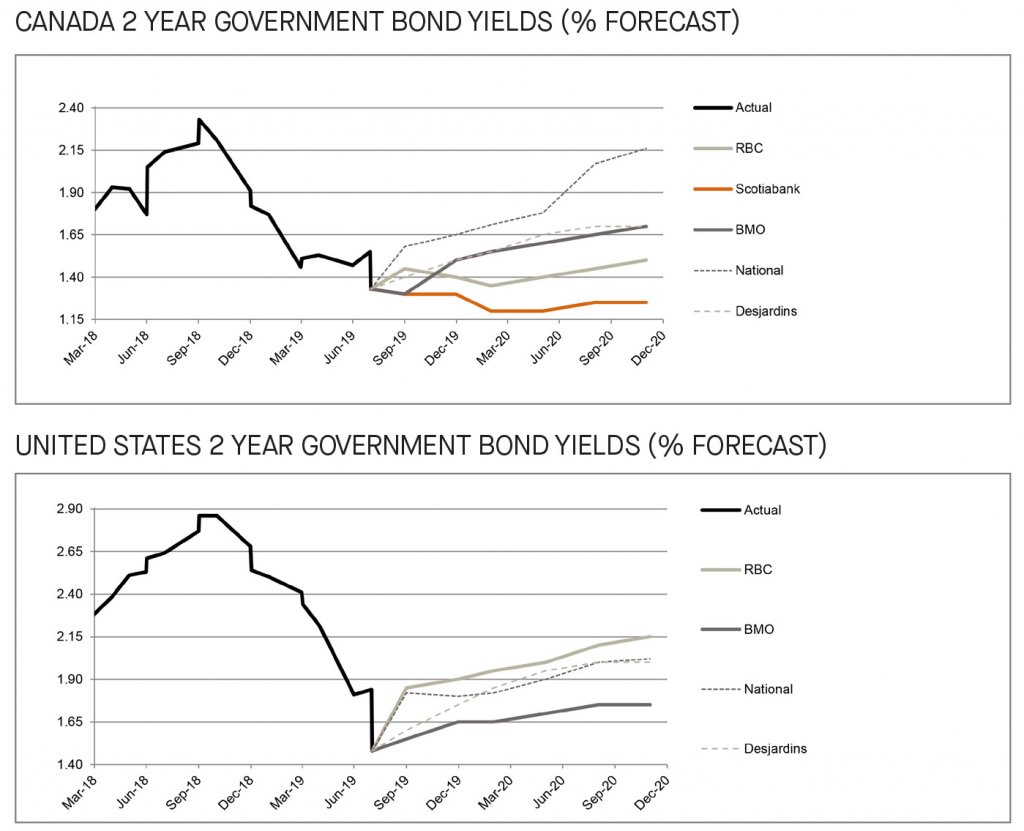 On August 14th, the 10-year U.S. treasury bond yields fell below the 2-year bond yields for the first time since 2007, reigniting fears that escalating trade tensions may lead to recession. Given the Fed July rate cut and ongoing trade tensions in the U.S., BMO notes the 10-year bond yield is unlikely to reach the 2% mark by year-end. As at the date of publication, the U.S. 10-year bond yielded 1.1%, while its 2-year counterpart yielded 1.3%. Overall, the surveyed banks anticipate that the 10-year government bonds will yield between 1.3% and 1.7% in Canada and 1.9% and 2.2% in the U.S. by the end of 2019. 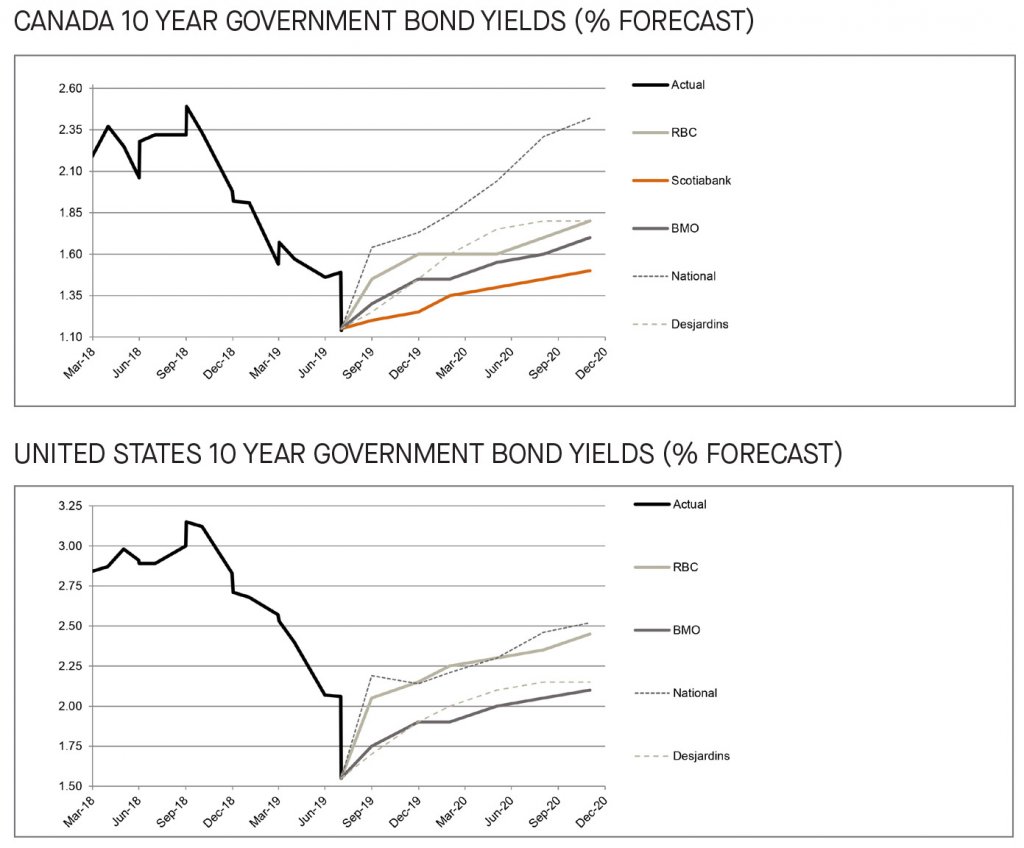 As highlighted by Chair Powell at his annual monetary policy symposium, geopolitical events, including the growing possibility of a hard Brexit, rising tensions in Hong Kong, and the dissolution of the Italian government, have led to a strong reaction from financial markets which attributed to long-term bond rates around the world moving down sharply to near post-crisis lows.[3] As a result, the U.S. long term bond yields plunged to a record low of below 2%, for the first time in history, attributable to the highly uncertain global economic outlook. As at the date of publication, the 30-year government bonds yielded 1.3% and 2.0% in Canada and in the U.S., respectively. 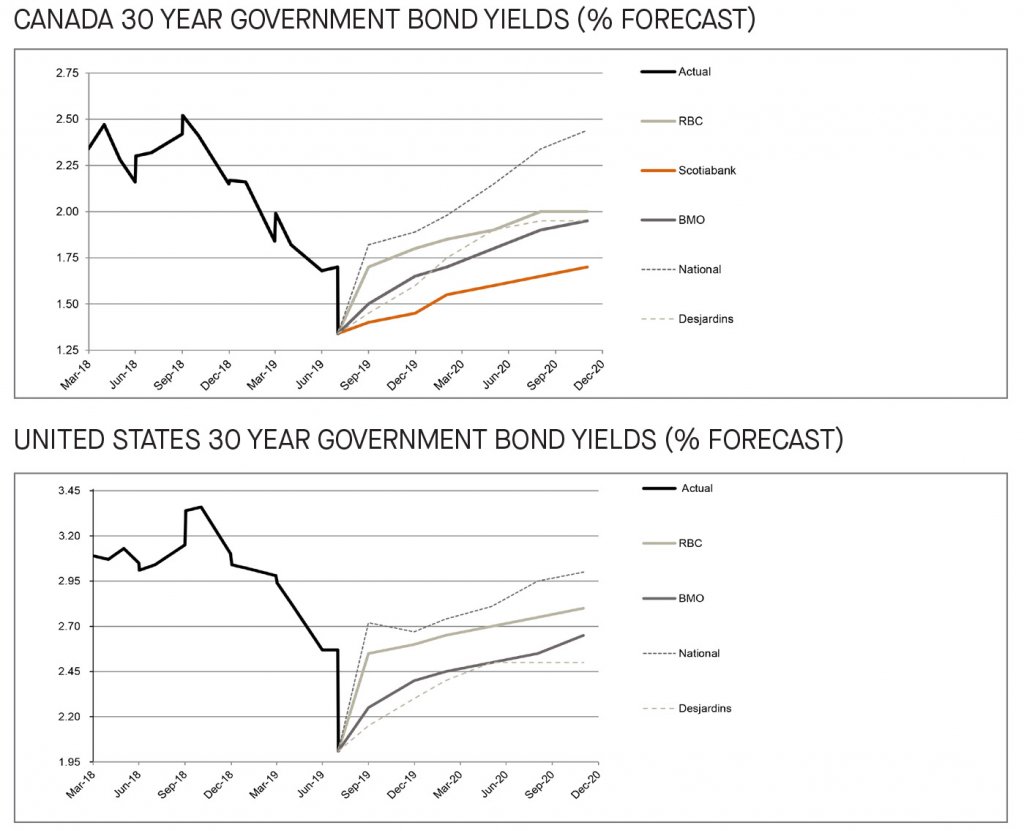 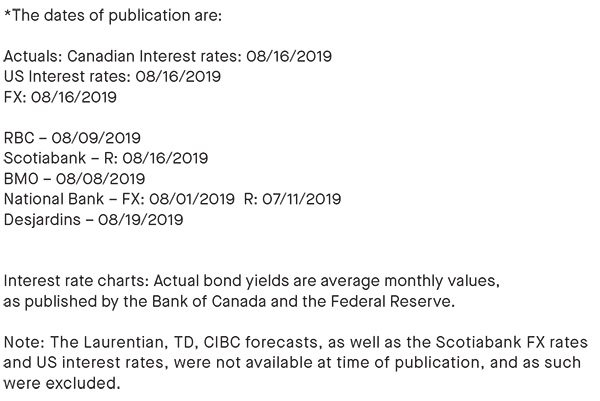