A truce in the China-US trade war, a step closer to a USMCA deal, and a confirmation on Brexit ease global uncertainties as we enter a new decade.

In its final meeting of 2019, the Bank of Canada (“BoC”) opted to maintain its interest rate at 1.75%. The BoC sounded more upbeat than in its October meeting, as Governor Stephen Poloz highlighted positive third quarter results reflecting increased consumer spending, strength of the housing sector and an increase of 1.3% to annualized GDP growth estimates. On the trade front, the markets cheered as leaders from the US, Canada and Mexico agreed to a modified version of last year’s USMCA (ratification expected in early 2020); and a US-China truce to the ongoing trade war. Thereafter, on December 6, Statistics Canada released its November Labour Force Survey results and cited that the Canadian unemployment rate increased from 5.5% to 5.9% since October.[1] Consequently, the CAD traded down to 75.3 US¢/CAD, erasing a portion of the relative gains achieved on the heels of the trade news.[2]

In the US, the Federal Open Market Committee (“FOMC”) held its target range steady at 1.5% to 1.75% at its December meeting. Chairman Jerome Powell highlighted that although business investment slowed in Q3, there continues to be resilience in the labor market and GDP growth picked up by 2.1% on an annualized basis.[3] On the trade front, while positive momentum with trade negotiations was gained with China, the US threatened steel import tariffs from Brazil and Argentina; as well as import duties on select European goods. Such trade tensions are likely to put a strain on exports, further exasperated by the USD’s relative strength against currencies of its major trade partners. Overall, the surveyed banks are in consensus and forecast the US¢/CAD currency pair to trade between 75.0 (CIBC) and 78.0 (National and Scotiabank) US¢/CAD by Q1 of 2020. However, their views diverge by the end of 2020.

Prime Minister Boris Johnson and the Conservative party won a majority in the UK’s December 12th election, leading many to believe this paves a clearer path for Brexit to officially happen. The outcome was grasped favorably by the GBP and the financial markets in general. The next step for the Prime Minister would be to get the Withdrawal Agreement approved by lawmakers and direct focus on negotiating a UK/EU trade deal to hopefully jumpstart the UK economy, which has flat-lined in recent months.

Also on December 12th, Christine Lagarde held her first press conference as the President of the European Central Bank (“ECB”). President Lagarde sounded more optimistic than her predecessor but weak economic stats continue to plague the Eurozone. The UK and the EU have until December 31, 2020 to reach a trade agreement which will hopefully aim to revive the struggling UK and European economies. Given the muted economic data, RBC expects the European Central Bank’s extraordinary stimulus will remain in place for an extended period of time. As for the EUR, a consensus is observed by the surveyed banks which anticipate the pair to trade between 67.0 (CIBC) and 70.0 (RBC) EUR¢/CAD by Q1 of 2020.

BoC and Fed hold steady for remainder of 2019

On December 4th, the BoC announced that its overnight rate would be left unchanged, thereby having held it at 1.75% for all of 2019. Many surveyed banks have forecasted that the BoC will also hold steady through 2020 and indicate that it would take “meaningful shock” to convince the central bank to adjust its monetary policy. Meanwhile, RBC and Scotiabank anticipate a rate cut in 2020 as numerous headline risks cloud prospects of economic growth. Going into the new decade and as expected BoC will see a new leader as it was announced on December 6th that Governor Poloz will not look for a second term after the end of his seven-year term in June of 2020.

On December 11th, FOMC also held steady and maintained the Fed Funds rate at its target range of 1.5% to 1.75%, as predicted by the surveyed banks. Chairman Powell highlighted that “as long as incoming information about the economy remains broadly consistent with this outlook, the current stance of monetary policy likely will remain appropriate”.[4] Overall, most of the surveyed banks are forecasting that the Fed will remain on the sidelines throughout 2020.] 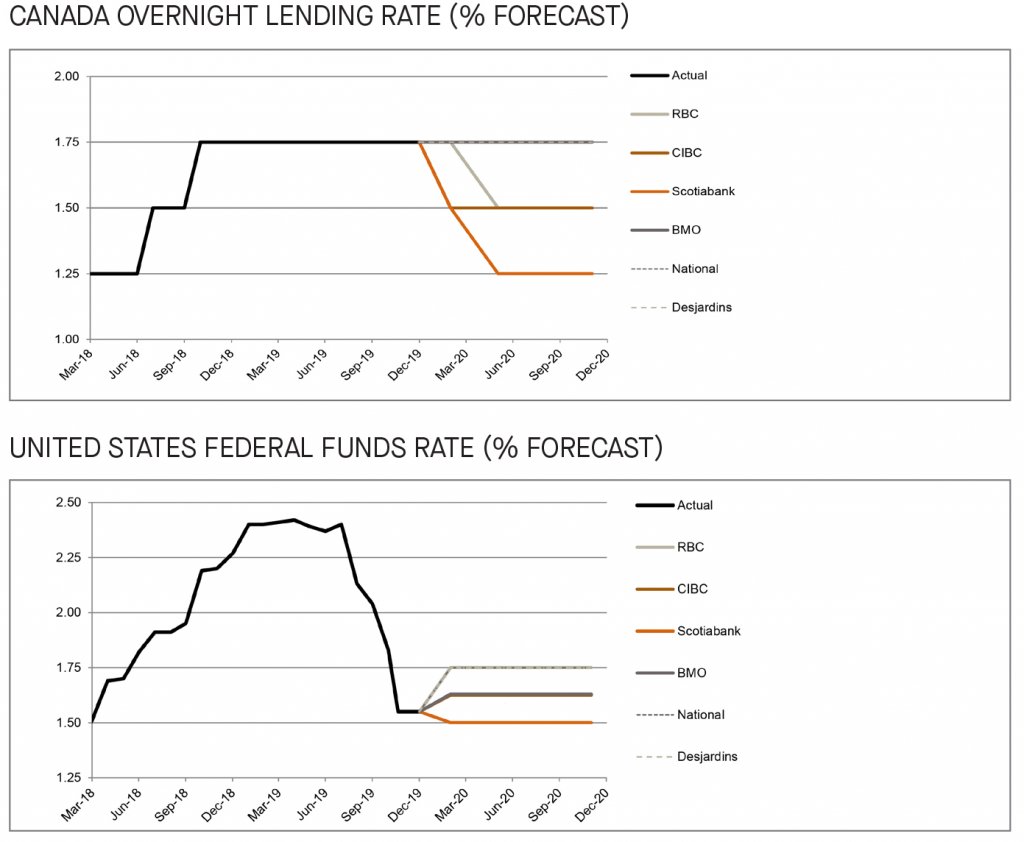 As of the date of this publication, the 2-year government bond yielded 1.7% and 1.6% in Canada and the US, respectively. The surveyed banks are in consensus that both the US and Canada 2-year bond yields shall either remain at current levels or slightly higher compared to the last month’s publication. The forecasts are in light of Q3 results in Canada and the US and trade developments which give more confidence to the economic outlook. The surveyed banks agree that both the US and Canada shall largely remain steady, anticipating the 2-year government bond yields to vary from 1.4% (CIBC) to 1.8% (Desjardins) in Canada, and 1.5% (Scotiabank) to 1.7% (Desjardins and RBC) in the US in Q1 of 2020. 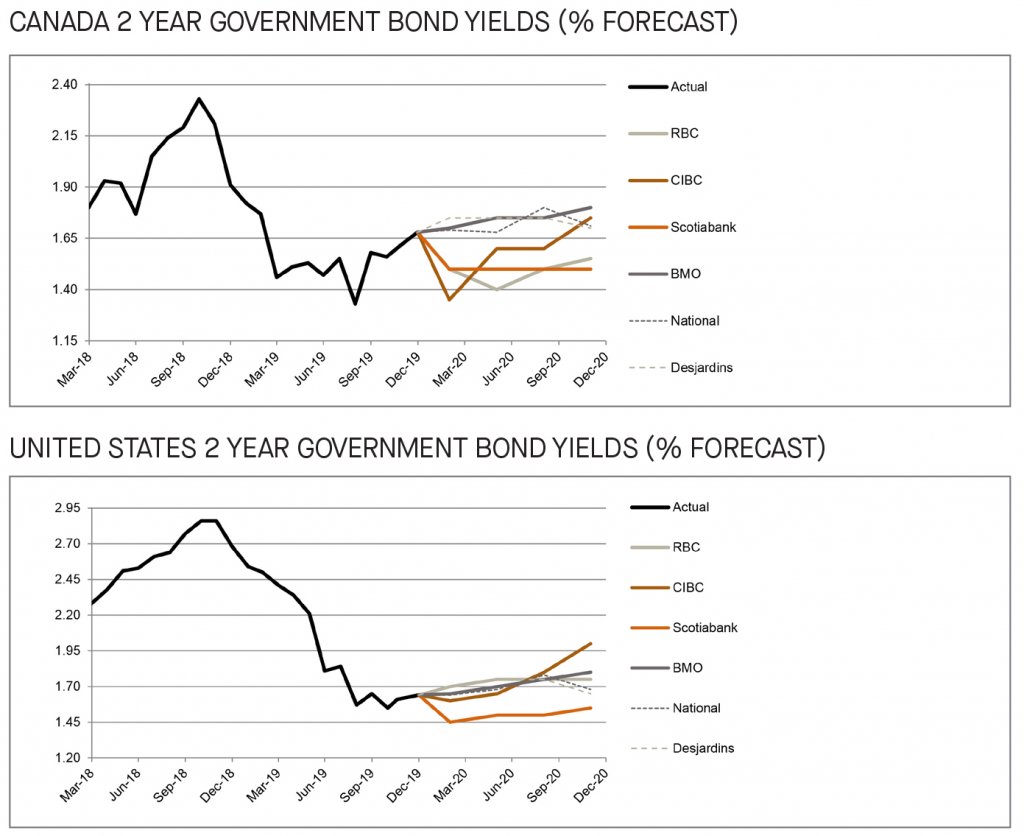 As of the date of this publication, the 10-year bond yielded 1.6% in Canada and 1.9% in the US. Developments, including a US-China trade truce, Brexit negotiations, the USMCA deal and optimistic rhetoric from the ECB’s new President have helped buoy 10-year government bond yields in Canada and the US. Overall, the banks are in consensus in the upward trend of the 10-year government bond yields, expecting them to yield between 1.3% (CIBC) and 1.8% (Desjardins) in Canada, and 1.7% (Scotiabank) to 2.0% (RBC) in the US in Q1 of 2020. 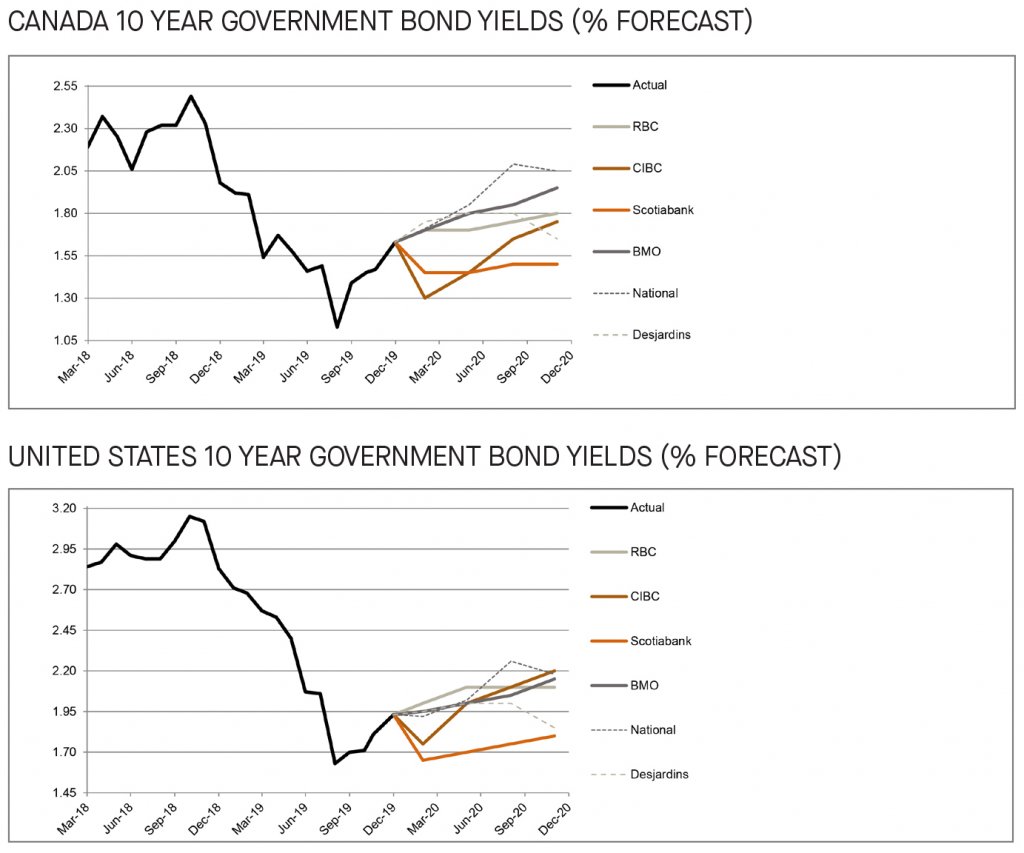 As at the date of publication, the long-term bond yielded 1.7% in Canada and 2.4% in the US. While the majority of the surveyed banks provide a stable forecast for the 30-year bond yields, National Bank made slight revisions to reflect a modestly more pessimistic view on the outcomes of the US-China trade truce negotiations. Overall, the surveyed banks expect the 30-year government bond to yield between 1.5% (CIBC and Scotiabank) to 1.9% (RBC and Desjardins) in Canada, and 2.1% (Scotiabank) to 2.5% (RBC) in the US in Q1 of 2020. 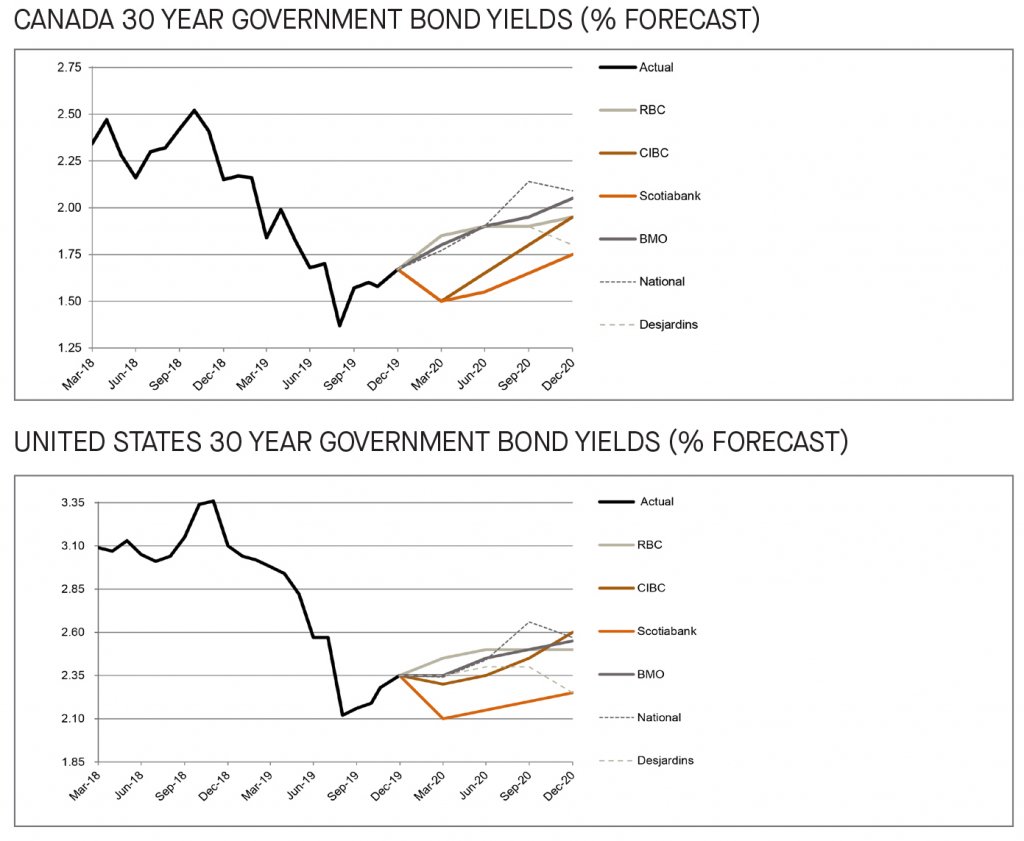 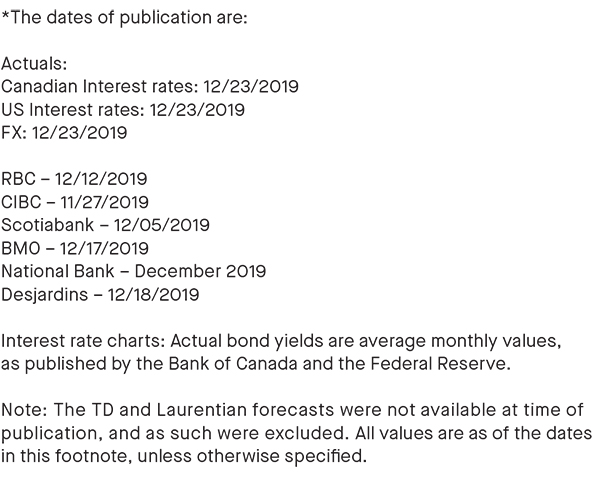