The Bank of Canada (“BoC”) turned dovish and kept the overnight rate unchanged on December 5 – citing moderating global growth, a decline in business investment caused by trade uncertainty, and a materially weaker energy section as oil prices slumped.[1] Governor Stephen Poloz further highlighted that the main risk to the economy remains the trade tensions between the U.S. and China.[2]

CIBC notes that the CAD is likely to gain back ground in Q1 of 2019 as oil prices recover and as the BoC raises the policy rate. National and Scotiabank share this view, with Scotiabank adding that the CAD is likely to benefit from a weaker Greenback due to the U.S. economy’s large trade and fiscal deficits. Meanwhile, TD cautions that the strengthening of the CAD is dependent on how event-risk evolves south of the border, such as policy uncertainty and tariff escalation. CIBC adds that they expect the USD to depreciate in 2020, citing a cooling of the US economy and a sizeable drag on growth from government restraints. Overall, the surveyed banks lack consensus as to the future value of the CAD versus the USD through the end of 2019, with TD, National, Desjardins and Scotiabank forecasting between 78.0 and 79.0 US¢/CAD, while CIBC and RBC see 74.6 to 75.2 US¢/CAD.

On December 14, the European Central Bank (“ECB”) announced that it will keep its monetary policy unchanged, adding that it expects the key ECB interest rates to remain at their present levels at least through the summer of 2019, and for as long as necessary to have inflation near 2% over the medium term. The ECB also confirmed that the asset purchase program will end at the end of 2018, highlighting that it will continue to reinvest the cash from the bonds for as long as necessary to maintain favourable liquidity conditions and an ample degree of monetary accommodation.[3] ECB President Mario Draghi highlighted risks to the euro area owing to the persistence of uncertainties related to geopolitical factors, the threat of protectionism, vulnerabilities in emerging markets and financial market volatility.[4]

CIBC suggests that while the EUR is still set to strengthen, it revised its trajectory lower given recent weakness. National mentioned that the EUR has potential to strengthen in 2019, but faces headwinds as the Euro area continues to struggle amidst ongoing internal strife. RBC noted that after a disappointing Q3 growth, the Euro area’s Q4 rebound is unlikely to impress. Overall, the surveyed banks expect the currency of the EUR¢/CAD forecasts to trade between 60.8 and 64.9 EUR¢/CAD through 2019.

While the BoC maintained the overnight rate unchanged on December 5, National noted that the chances of a January 2019 hike have diminished, and RBC believes it will be hard to see the BoC raising rates until Q2 of 2019 given the recent developments with oil prices. The surveyed banks are forecasting at least two additional rate hikes by Q4 of 2019, with TD, National and Scotiabank anticipating three additional rate hikes. Meanwhile the Federal Reserve delivered another rate hike on December 19. In a publication preceding that hike, TD noted that the Fed is likely to continue its monetary policy tightening in 2019 due to factors such as capacity constraints, which include labor scarcity and increasing input costs. Overall the consensuses amongst the surveyed banks are that the Fed will deliver a final hike in December which proved to be correct. 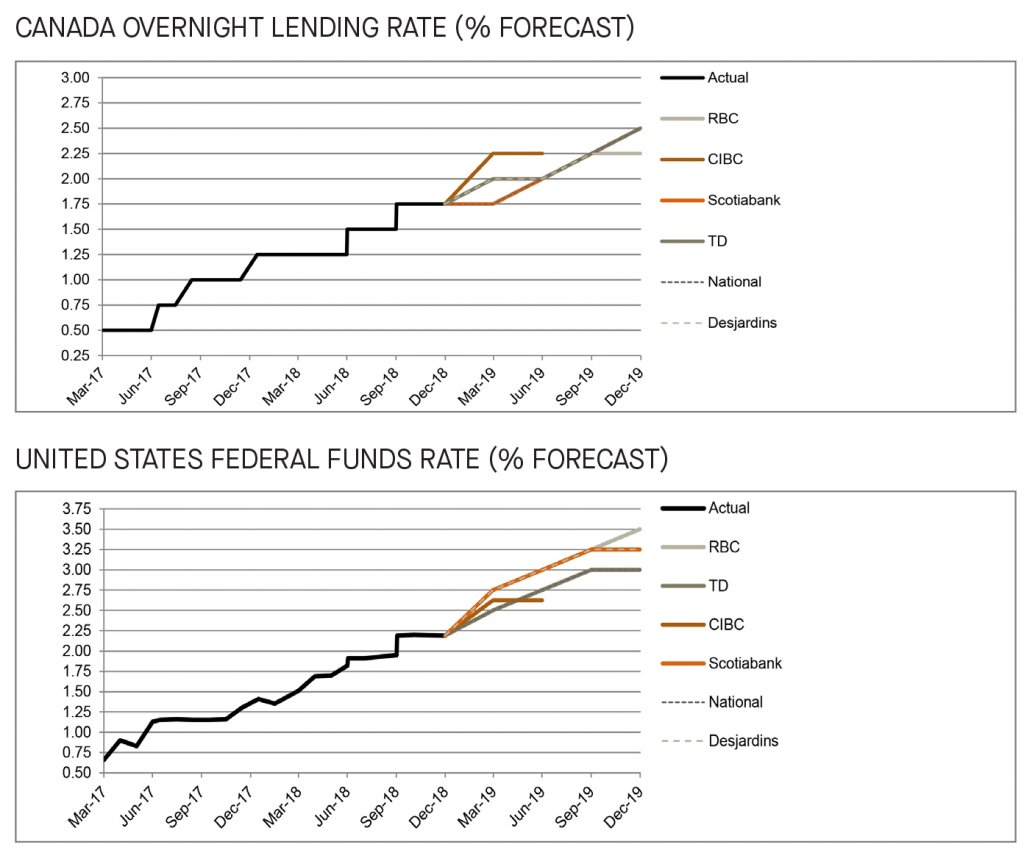 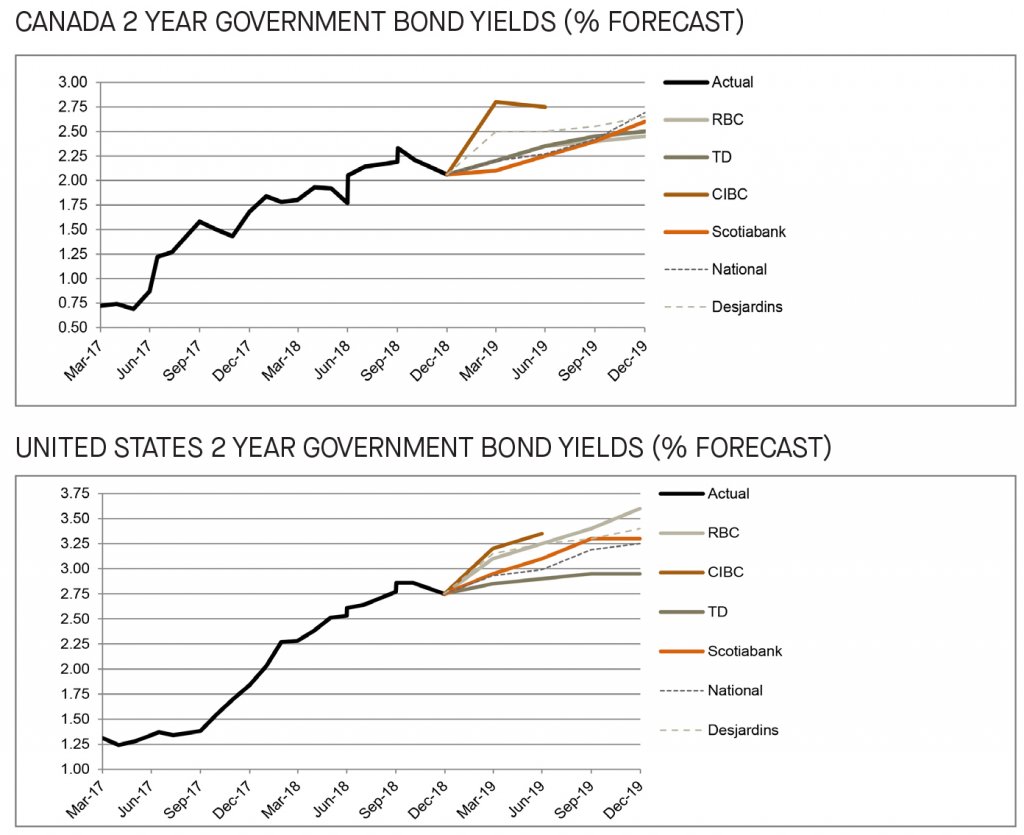 The 10-year government bond yield forecasts edged lower, with TD predicting that improved Canadian yields will be attainable in 2019 based on a combination of higher policy rates, inflation, and term premium. In the U.S., National attributes the downward adjustment to a huge volume of expected net new supply of bonds. Overall, the surveyed banks are in consensus that the Canadian and U.S. 10-year government bond yields will continue to rise, expected to yield between 2.8% and 3.0% in Canada and 3.2% and 3.8% in the U.S. by the end of 2019. 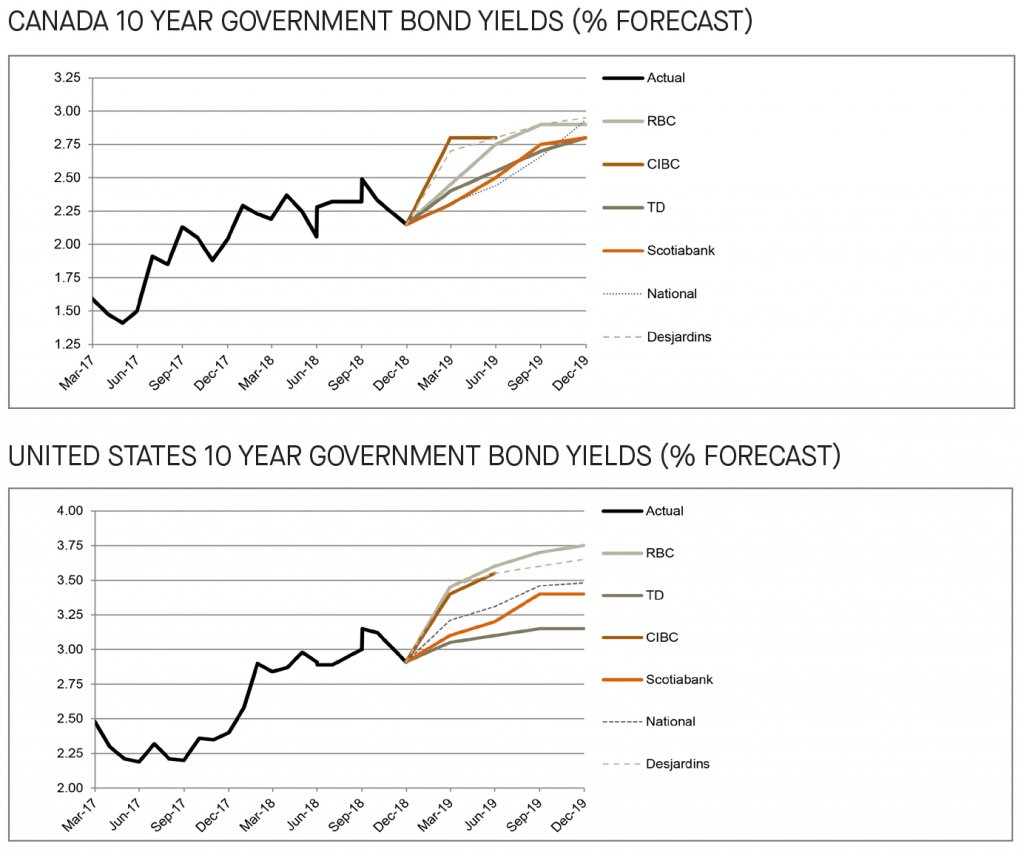 Yields drop on the long end of the curve, most surveyed banks revise expectations

Since last month’s publication, the Canadian long bond yield forecasts were revised down by most of the surveyed banks, except for Desjardins, which posted a slight upward adjustment. In the U.S., long bond yield forecasts were adjusted upwards by Desjardins and National, but downwards by TD. The rate adjustments are not surprising given the recent increased tensions in global trade and a more uncertain global economic outlook. Despite the adjustments, the surveyed banks remain in consensus as to the expectation of higher long bond yields in both Canada and the U.S. through 2019. 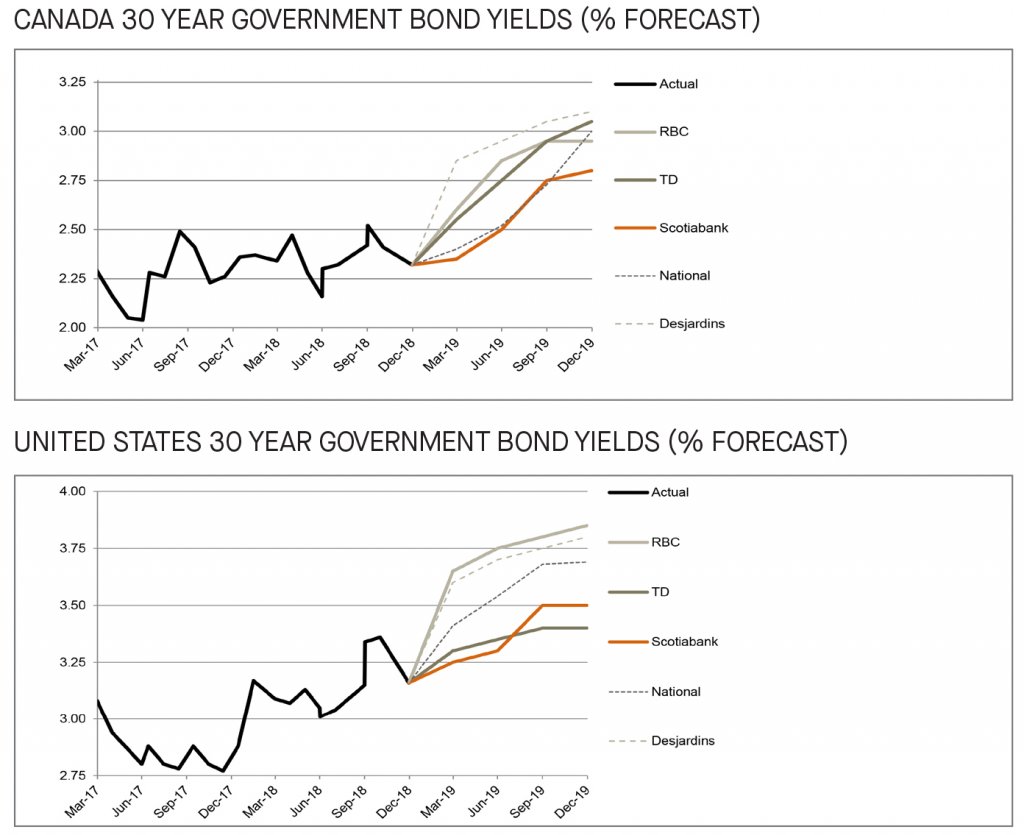 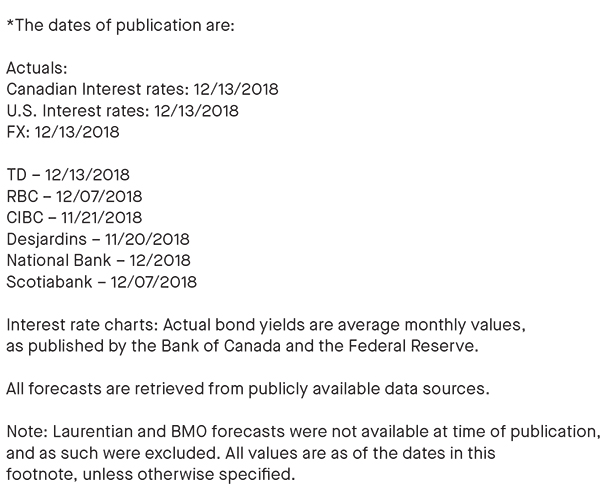