As at the date of publication, the Canadian dollar appreciated against the Greenback to its highest level in two weeks reaching 75.9 US¢/CAD. The Loonie appreciated on the heels of a rise in oil prices, which climbed to their highest level in 2019 driven by a combination of Saudi supply cuts, U.S. sanctions on OPEC members Iran and Venezuela, and a dovish Fed. BMO noted that the CAD was driven by foreign events rather than domestic ones, and with lower growth projections and a more cautious Bank of Canada (“BoC”), the dollar is likely to hover around 75.2 US¢/CAD throughout 2019. On the contrary, National is more optimistic about the Loonie’s prospects, highlighting that with increases in oil prices and unimpeded global trade flows, it sees the dollar closer to 78.7 US¢/CAD by mid-2019.

In the U.S., Chairman Powell highlighted headwinds at a January 30 press conference; specifically signs of slowing global growth, uncertainty over trade policy and tighter financial conditions. National adds commentary stating that aside from the occasional bouts of strength – coinciding with Fed signals or the return of risk aversion – it expects a mostly downward trend for the trade-weighted U.S. Greenback. Overall, the surveyed banks lack consensus as to the future of the pair, forecasting the currency pair to trade between 74.0 and 82.0 US¢/CAD by Q4 of 2020.

On January 24, the European Central Bank (“ECB”) decided that it would leave its interest rates and monetary policy unchanged, signaling weak monetary policy for the Eurozone throughout 2019. Thereafter, on February 15, the ECB’s Executive Board stated that “there might be scope for another Targeted Long-Term Refinancing Operation (“TLTRO”)”[1]. The market reacted negatively to this statement, sending the EUR lower. As at the time of publication, the currency pair traded at 66.7 EUR¢/CAD.

With a loss in momentum in the Eurozone, Italy entering a technical recession for the third time in a decade and Brexit uncertainty only increasing, RBC noted that the ECB is likely to extend their guidance on how long interest rates will remain at current levels. BMO believes that, as the risks to the outlooking for economic growth in the Eurozone have moved to the downside, and with concerns over a possible recession in Germany, the ECB will delay a rate hike until early 2020.

On February 21, Governor Stephen Poloz of the BoC highlighted that the current overnight rate of 1.75% is below the rate of inflation, and the BoC continues to deliver stimulus to the economy, adding that the overnight rate path to a neutral range (between 2.5 and 3.5%) is “highly uncertain”. Poloz further added that the BoC remains data dependent, expressing concern over the impact of higher interest rates on highly indebted Canadians, stricter mortgage rules, business investment and uncertain global trade environment[2]. The surveyed banks highlighted similar concerns and most are forecasting that the BoC will be on hold until the second half of 2019.

In a January 30 statement, the Federal Open Market Committee (“FOMC”) struck a dovish tone where it altered its policy course by removing the sentence about the need for “further gradual” increases to the Federal Funds rate, highlighting that it will be patient as signs of a weakening economy are on the rise[3]. RBC highlighted that the change in the Fed’s tone emphasized a more patient and data dependent approach to its future monetary policy adjustments. Overall, the surveyed banks are forecasting that there will be a few rate-hikes between Q2 and Q4, with BMO and National only expecting one rate hike in Q4 of 2019. 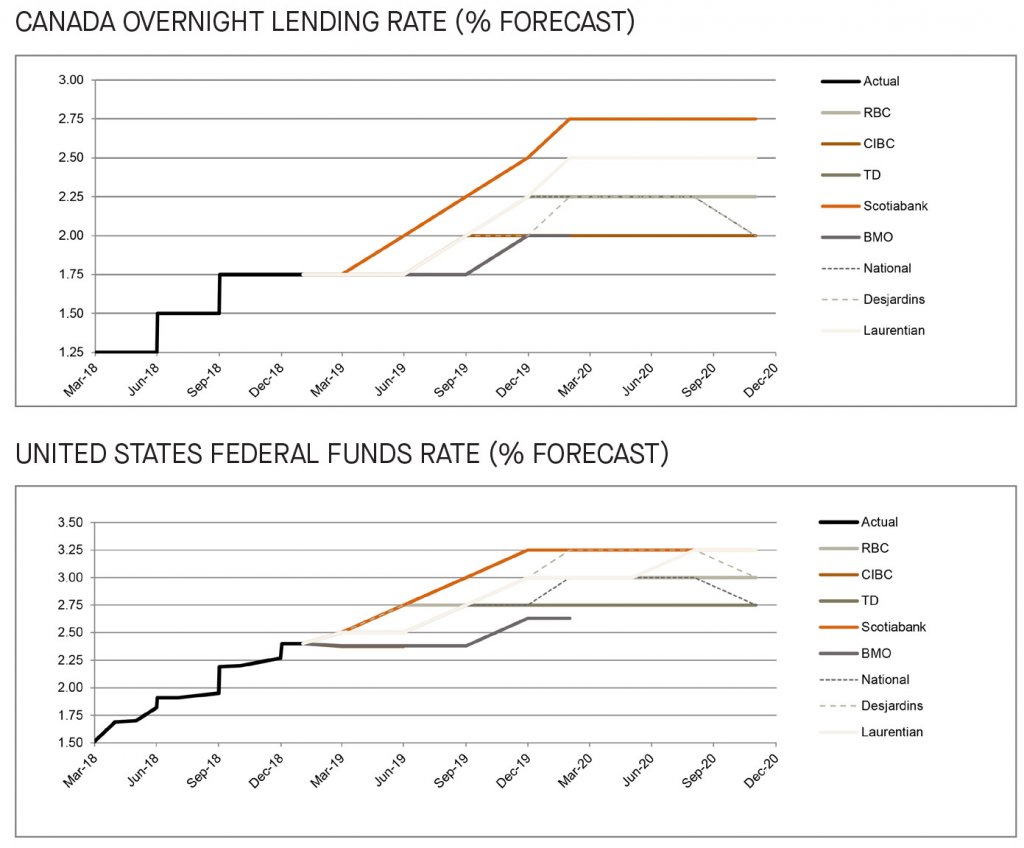 As at the date of publication, the 2-year government bond yielded 1.8% and 2.5% in Canada and the U.S., respectively. Most of the surveyed banks, with the exception of National and Scotiabank who maintained their forecasts, made downward adjustments to their Canadian and U.S. 2-year government bond yield projections. National cited optimism about the U.S. economic outlook and a projection of an acceleration of the Canadian economy. The reporting banks are in consensus that the yields shall steadily rise through to Q4 2019, but reverse course throughout 2020. CIBC is on the low end of the forecasts, expecting the 2 year Canadian and U.S. government yields to decline to 1.7% and 2.3% by Q4 2020, respectively. 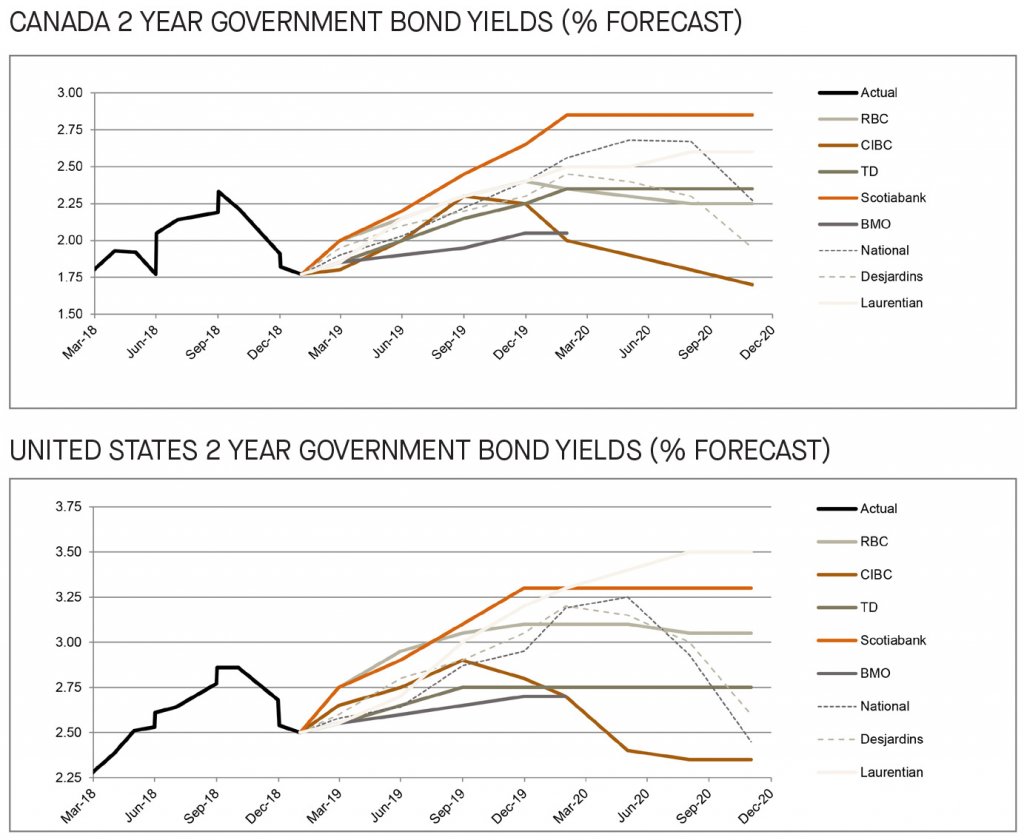 Compared to last month’s publication, the 10-year government bond yields in Canada and the U.S. were downwardly adjusted by the surveyed banks. BMO continues to see the U.S. 10-year yields persistently below 3%, whereas CIBC believes that a stabilization in global growth and modest move higher in oil price/inflation could press yields upwards above the 3% mark. In Canada, with the BoC keeping pace with the FOMC, BMO expects the yields to stick to their current ranges. National projects that should inflation return to 2% by late 2019 and with higher oil prices, yields will continue to rise throughout the year.

Overall, the banks are in consensus as to the upward trend of the 10-year government bond yields, expecting them to rise to between 2.1% and 2.8% in Canada and 2.9% and 3.4% in the U.S. by Q4 2019. However, the banks also present less economic confidence in the longer term as they expect the 10 year bond yields to trend lower through 2020 from their 2019 levels. 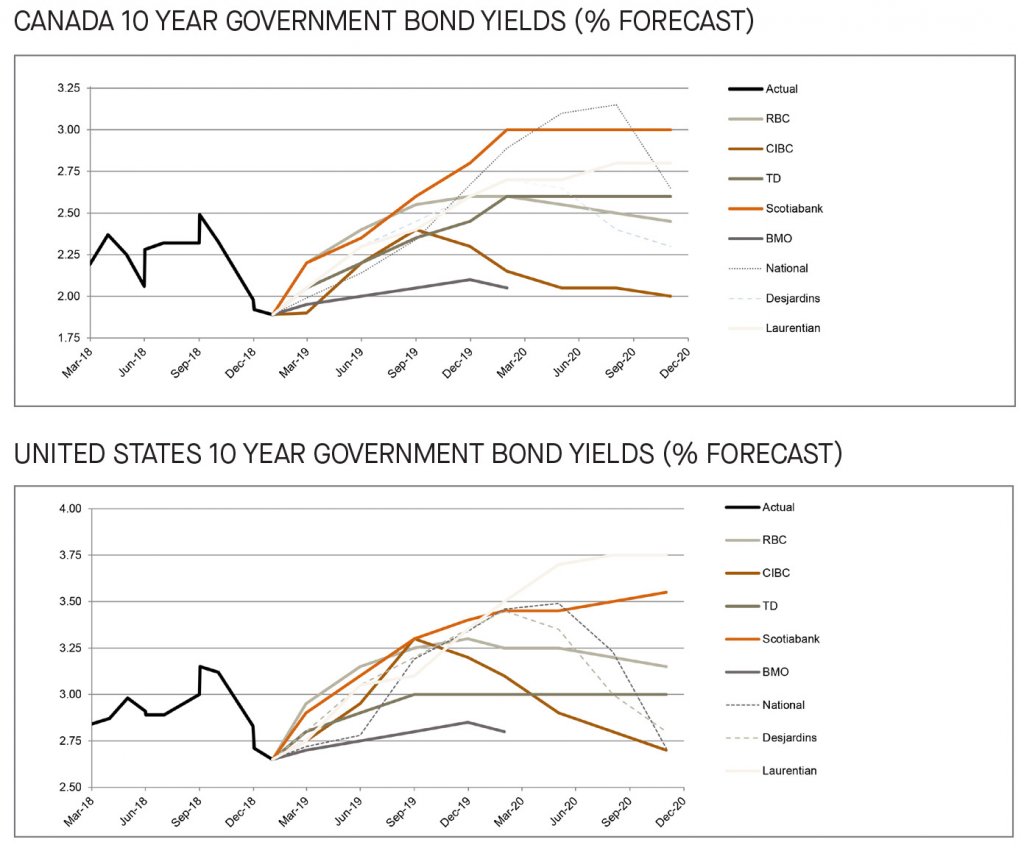 For the third month in a row, Canadian and U.S. long bond yield forecasts are adjusted down

Consistent with adjustments in shorter-term bond yields, we observe downward adjustments made to the long-term bond yields in the U.S. and Canada. Overall, similar factors affecting the 10-year Canadian and U.S. government bond yields are also weighing on the long bond yields, including; trade tensions, geopolitical uncertainty and weak inflation. In summary, Scotiabank is on the high end of the Canadian forecast, whilst National is on the high end of the U.S. forecast, expecting the long bond yields to rise to 2.9% and 3.5% by the end of 2019, respectively. 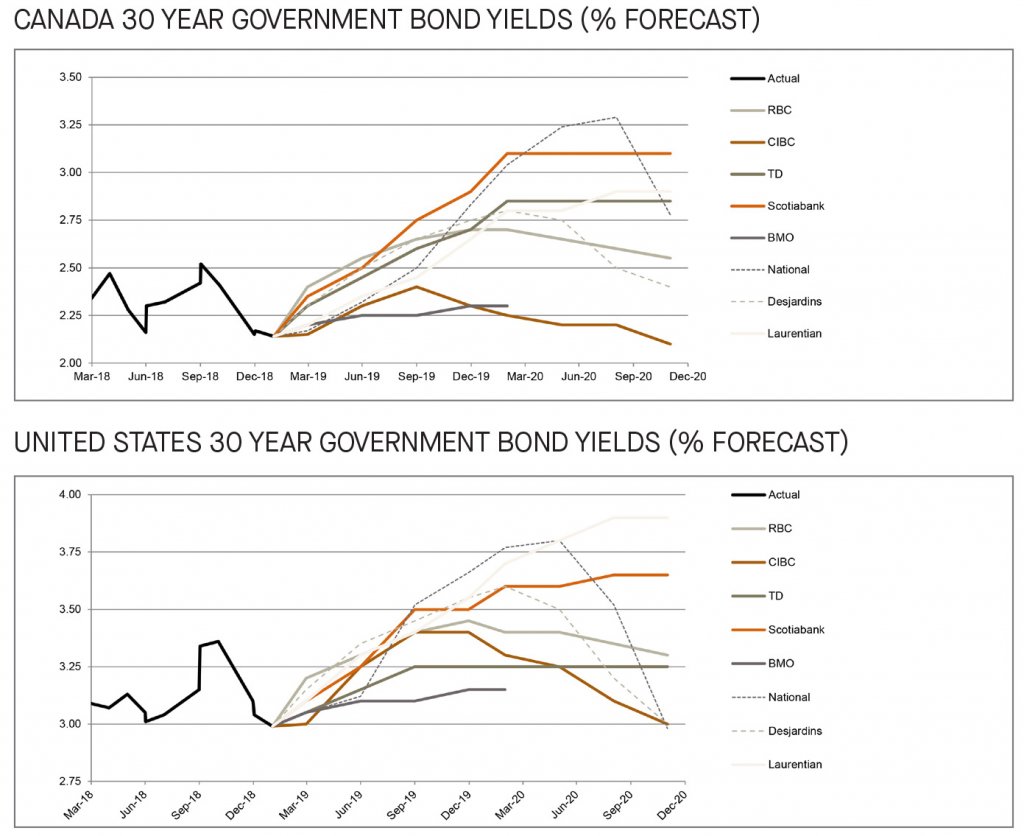 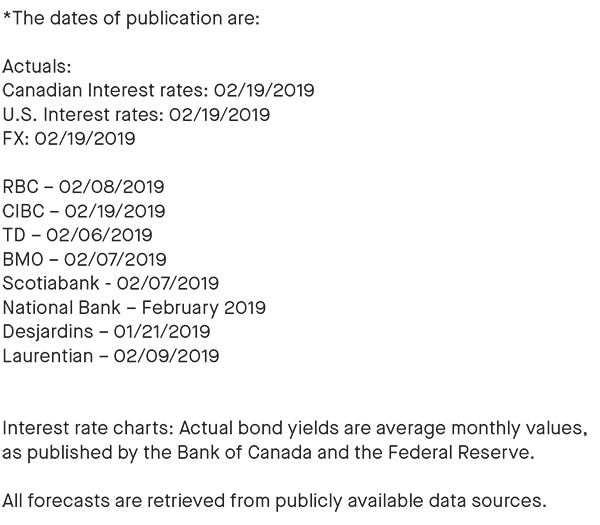