Brexit finally happens and the coronavirus wreaks havoc on the Chinese populace and economy despite progress on the U.S.-China trade agreement.

Increased concerns over the coronavirus outbreak emanating from China have begun affecting world markets. The global spread of the deadly virus led the World Health Organization (WHO) to declare a public health emergency on January 30th.

Despite the U.S. reaching a trade agreement for China to purchase an additional $200 billion of American goods and services, the coronavirus outbreak has led Chinese government economists to request a delay on the deal. This is due to reduced demand for Chinese goods and a lockdown on many locations within the country that will likely affect global supply chains.[1]

In the Bank of Canada’s (BoC’s) latest rate decision on January 22nd, the central bank maintained the Overnight Rate at 1.75%, the Bank Rate at 2% and the Deposit Rate at 1.5%. The BoC’s statement indicated the “global economy was showing signs of stabilization, and some recent trade developments have been positive. However, there remains a high degree of uncertainty and geopolitical tensions have re-emerged with tragic consequences.” The BoC’s estimate for Canadian Q4 2019 growth was just 0.3%, while its Q1 2020 growth forecast is 1.3%.[2]

The US Federal Open Market Committee (FOMC) held its Fed Funds target rate unchanged at 1.5%–1.75% on January 28th. While that was expected, the FOMC substituted the word “near” to “returning to” in reference to the 2% symmetric inflation objective. This suggests a slightly dovish inclination since the economy is further away from its target than previously estimated. Fed Chair Powell also clarified that the 2% inflation objective was not a ceiling and that policymakers would not begin to raise rates until there was a persistent increase in the US inflation rate from its current 1.6% level.

The Brexit withdrawal agreement was signed on January 24th, 2020, and the European Parliament gave its consent on January 29th. It was then ratified by the Council of the European Union on January 30th and was subsequently endorsed by leaders of the 27 remaining EU nations. It gives the UK and EU a transition period until December 31st, 2020 in which the UK will remain in the single market so that the parties can work out a trade agreement. Without a viable trade agreement, the UK’s exit from the EU would effectively become a “no deal” Brexit.

According to RBC, EU GDP growth unexpectedly slowed to 0.1% in the last quarter of 2019 due to declines in Italian and French GDP numbers, with French numbers adversely affected by labour disruptions. RBC noted that recent stabilization in its survey data suggests that European Central Bank (ECB) monetary policy may be less dovish. RBC also expects the ECB to remain on the sidelines and the EUR/CAD cross rate to trade between 1.4100 and 1.5200 for the remainder of the year, while CIBC expects the cross to trade in the 1.4400 to 1.5500 range.

BoC rates forecast to decline, while the Fed is expected to hold rates steady in 2020

BoC Governor Poloz spoke to reporters on January 18th saying that, “a rate cut remains on the table” due to “inflation being below target for a prolonged period”, although the BoC left its Overnight Rate unchanged at 1.75% on January 22nd.

RBC, CIBC and Scotiabank all forecast that the BoC could begin easing in April if Canadian economic growth continues showing signs of weakness, although they still expect the Overnight Rate to remain unchanged at 1.75% at the next meeting on March 4th.

The FOMC left the Fed Funds Rate at 1.50%–1.75% at their latest meeting on January 28th, with Fed Chair Powell stating that the central bank’s current monetary stance was appropriate given its objectives. Banks surveyed expected the FOMC to keep the Fed Funds rate fairly steady overall throughout 2020, with Scotiabank projecting 1.5%, CIBC’s estimating 1.625% and National forecasting 1.75%. 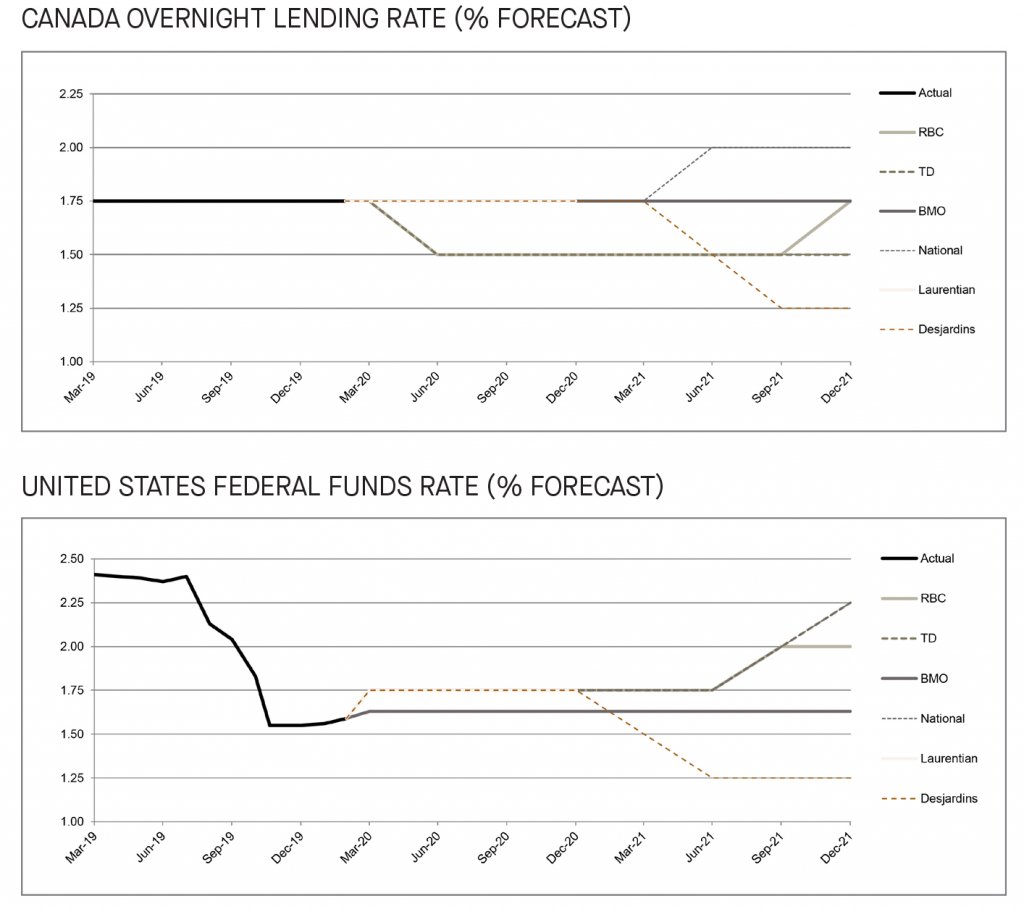 2-year bond yields forecast to rise in the U.S. and Canada 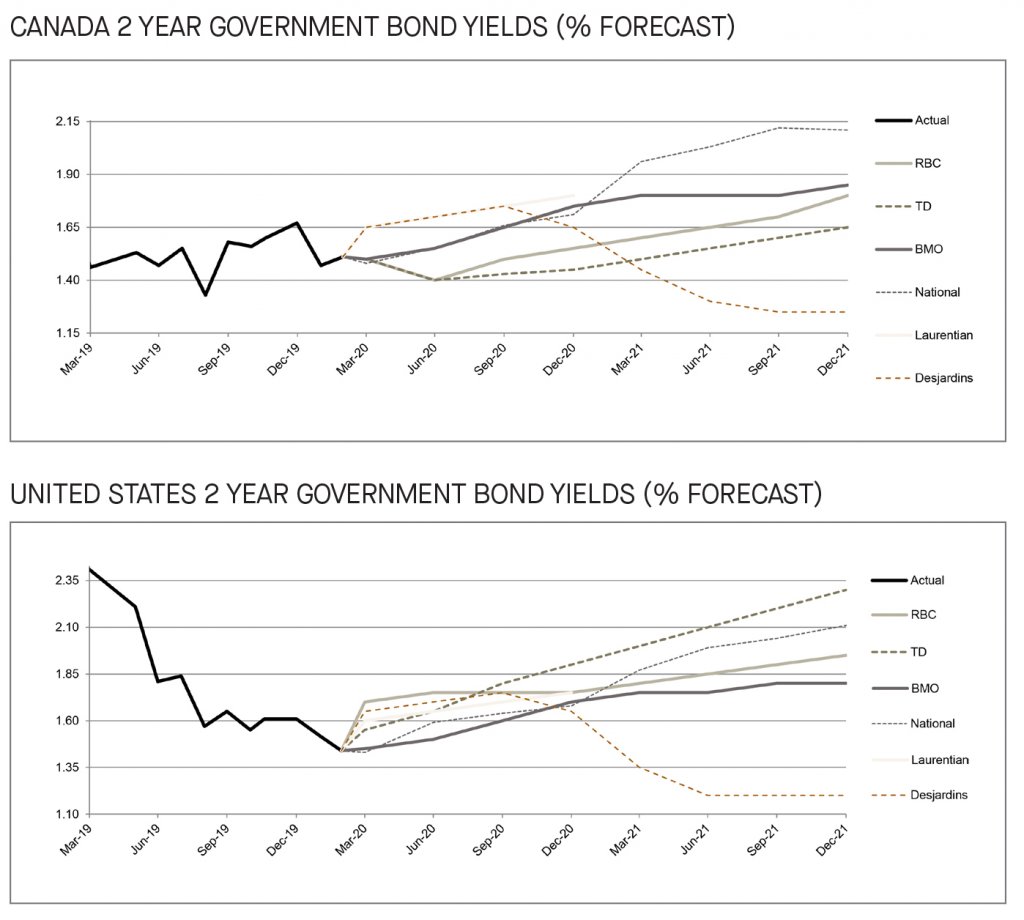 10-year bond yields for U.S. and Canada expected to increase beginning in 1Q 2020 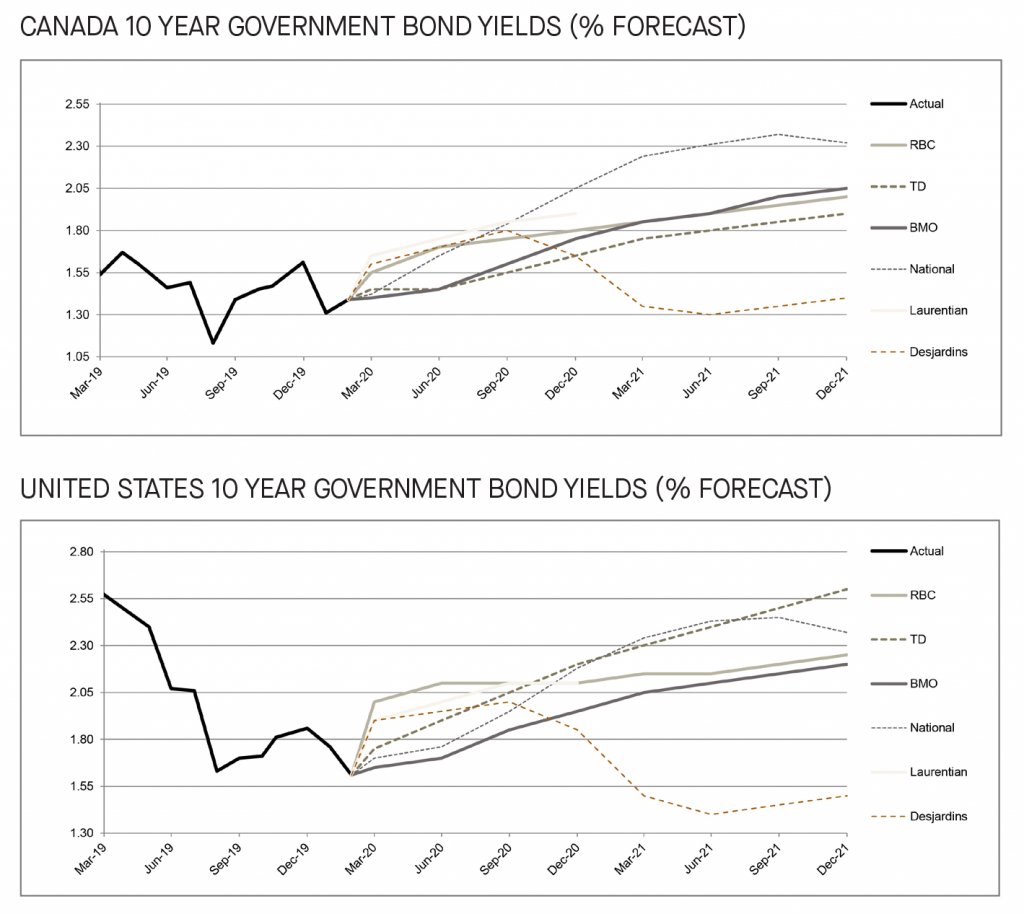 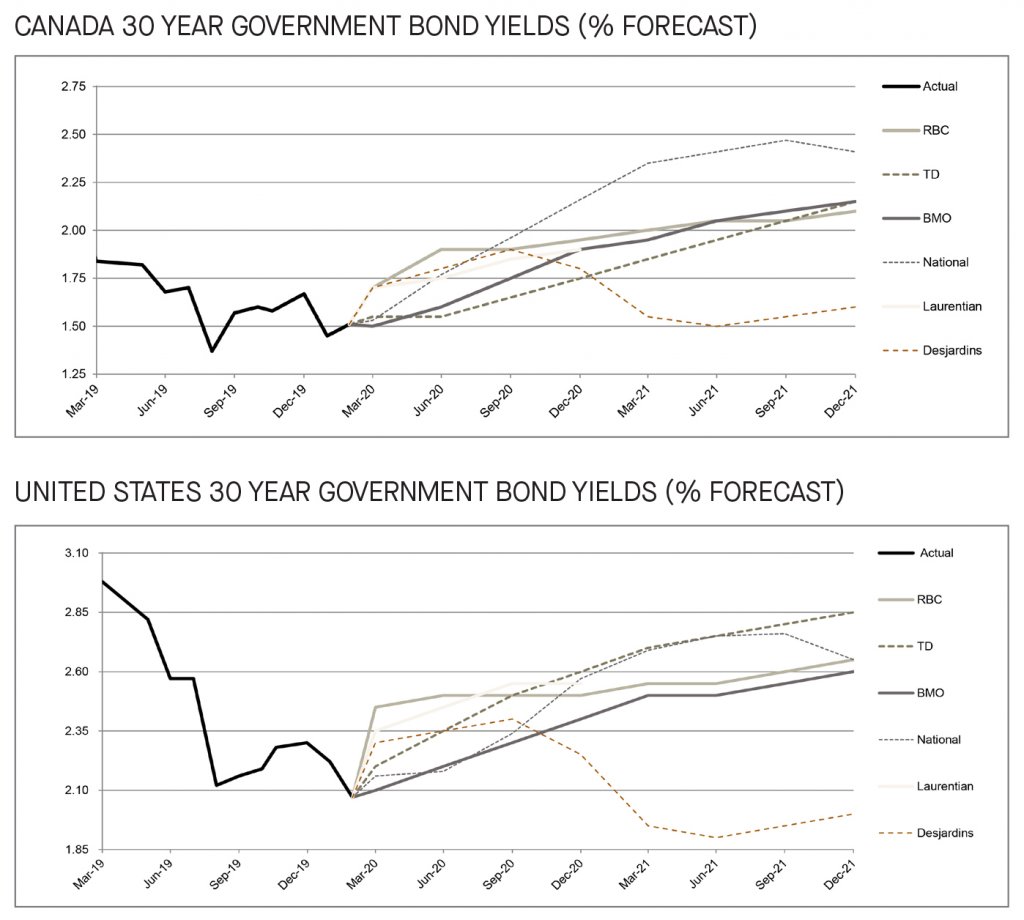 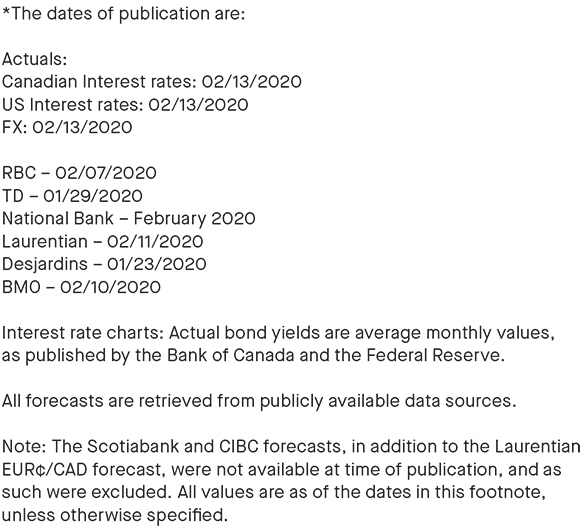