An eventful start to the decade as military conflict, trade and political movements, as well as a health epidemic headline the economic outlook.

The new decade started with rising US-Iran tensions from the news of the assassination of an Iranian general, which drove oil prices in the first week of 2020 to levels not seen since May of last year.[1] Thereafter an emerging fear of the impact to trade disruptions from the coronavirus caused oil prices to post the worst drop since last July.[2] (The SARS outbreak in 2003 cost the global economy around US$40 billion.[3]) Closer to home, in its first press release of 2020, the Bank of Canada (“BoC”) sounded dovish in its rhetoric, citing very weak Q4 growth, a slow down in consumer spending and business investment, and hinting that a rate cut may be warranted if economic uncertainties persist. Accordingly, the BoC revised its projections and now estimates a growth of 1.3% for the first quarter of 2020.[4] As a result of the dovish BoC announcement, the Loonie weakened to a four-week low against the Greenback.[5]

In the United States, Fed rate cuts have provided a boost to the US housing sector, as a surge in building permit issuance in Q4 of 2019 marked a 20-year high in homebuilders’ confidence. Further, on January 27, General Motors announced a US$2.2 billion expenditure in a Detroit plant to manufacture electric vehicles, and an additional US$800 million for supplier tooling and related projects.[6] Going forward, the surveyed banks are divided. CIBC forecasts the Loonie dropping in 2020, noting that population growth might not translate to a favorable labour market nor might it sustain consumption growth. Conversely, Scotiabank forecasts the Loonie rising in 2020 on the basis that if global risks dissipate; the US dollar will soften. Overall, the surveyed banks lack consensus as to the future of the pair, forecasting the currency pair to trade between 74.0 (CIBC) and 80.0 (Scotiabank) US¢/CAD by Q4 of 2020.

Brexit made official; a bumpy road ahead in the Eurozone

January 31st marked the departure of the UK from the EU pursuant to the European Union (Withdrawal Agreement) Act 2020 enacted by the UK Parliament on January 23rd, 2020. Leading up to Brexit day, the UK economy had been sluggish at best – the manufacturing sector remained stagnant and retail sales were unimpressive during the holiday season. With a no-deal Brexit being taken off the table, the transitional period may see a pickup in business and consumer confidence. However, the surveyed banks cautioned that uncertainty remains as it seems unlikely that a comprehensive UK-EU post Brexit agreement will be reached by end of 2020.

In her first post-meeting press conference, new President Christine Lagarde of the European Central Bank “ECB” provided an optimistic view noting signs of growth stabilizing and downside risks are becoming less pronounced. Although the worst may be over, challenges continue ahead in the Eurozone notably the playout of the Brexit saga, the threat of more tariffs from the US, and the slowdown in China (luxury fashion companies such as LVMH rely heavily on Chinese buyers). The surveyed banks agree that additional stimulus from the ECB should not be ruled out in 2020; but they lack consensus as to the future of the currency pair, forecasting the EUR to trade between 63.3 (CIBC) and 69.0 (Scotiabank) EUR¢/CAD by Q4 of 2020. CIBC’s forecast had a view of Europe being one of the largest casualties of the slower global growth and trade uncertainties. In contrast, Scotiabank’s forecast took the view that progress on Brexit should prove somewhat supportive for the Euro.

Last year, the BoC remained steady on its stance to maintain its overnight interest rate at 1.75%. The BoC has been one of the few banks to resist cutting rates during 2019’s global slowdown. However, recent rhetoric from Governor Poloz was dovish as he commented that “I’m not saying that the door is not open to an interest rate cut, obviously it is, it is open”.[7] The banks lack consensus as to the BoC’s next action. RBC, Scotiabank and CIBC have forecasted a rate cut by Q2 of 2020. National and Laurentian are in the view that the BoC will continue to hold steady again in 2020. Conversely, in the United States, most of the surveyed banks commented that 2020 will be a quiet year for monetary policy, as they foresee the Federal Open Market Committee leaving the target range unchanged at 1.5% to 1.75%. 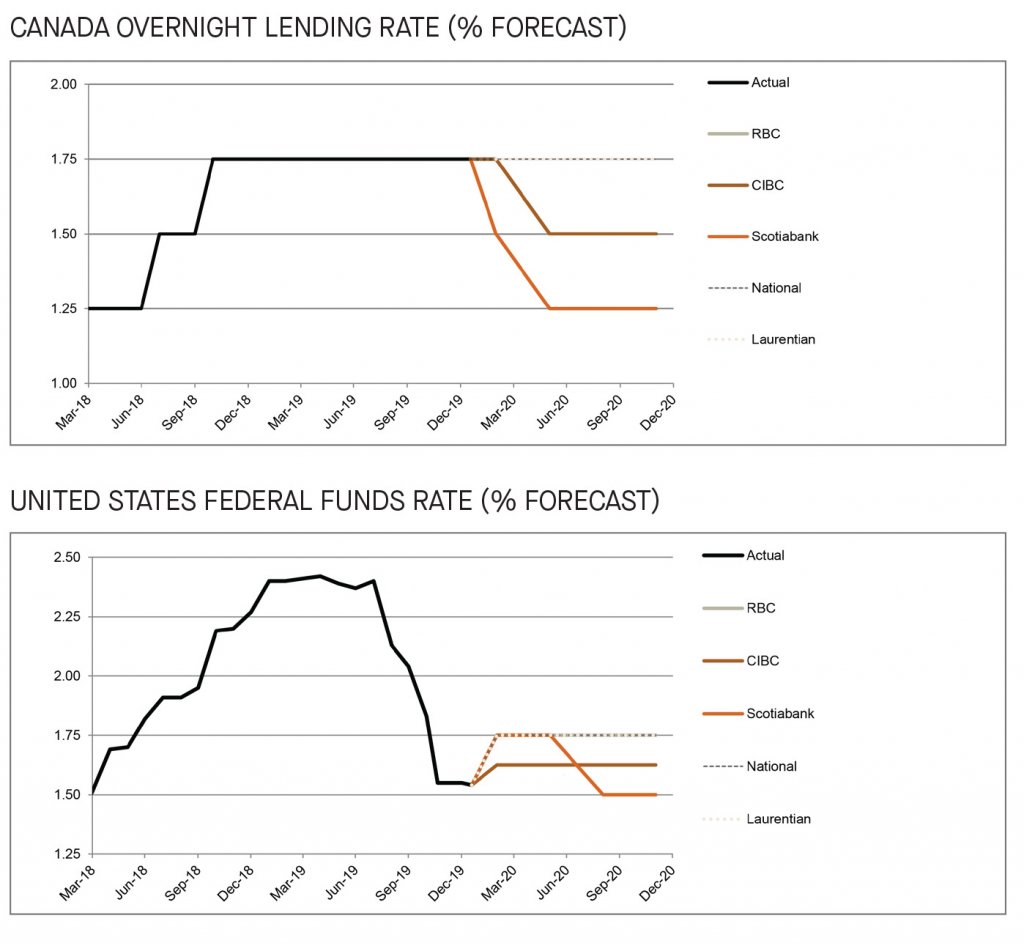 As of the date of this publication, the 2-year government bonds yielded 1.7% and 1.5% in Canada and the US, respectively. Compared to the last month’s publication, most of the surveyed banks have kept their forecasts consistent with the sentiment of the “Phase 1” trade truce in the US-China has eased trade tensions. 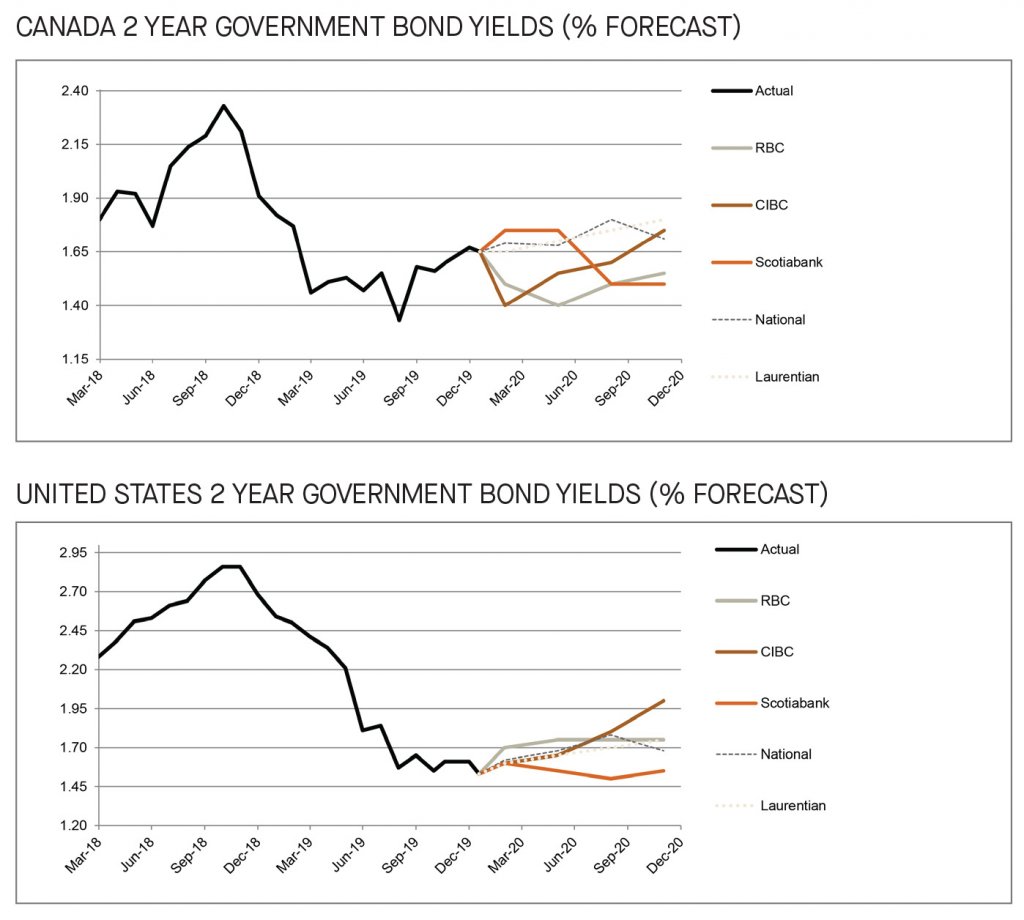 As of the date of this publication, the 10-year bond yielded 1.6% in Canada and 1.8% in the US. The surveyed banks kept their forecast of the 10-year bond yields consistent with the last publication with the expectation that the bond yields will stay relatively low as trade uncertainty and geopolitical risks continue to persist. The surveyed banks expect the 10-year government bonds to yield between 1.5% (Scotiabank) and 2.1% (National) in Canada, and between 1.8% (Scotiabank) and 2.3% (CIBC) in the US, by Q4 of 2020. 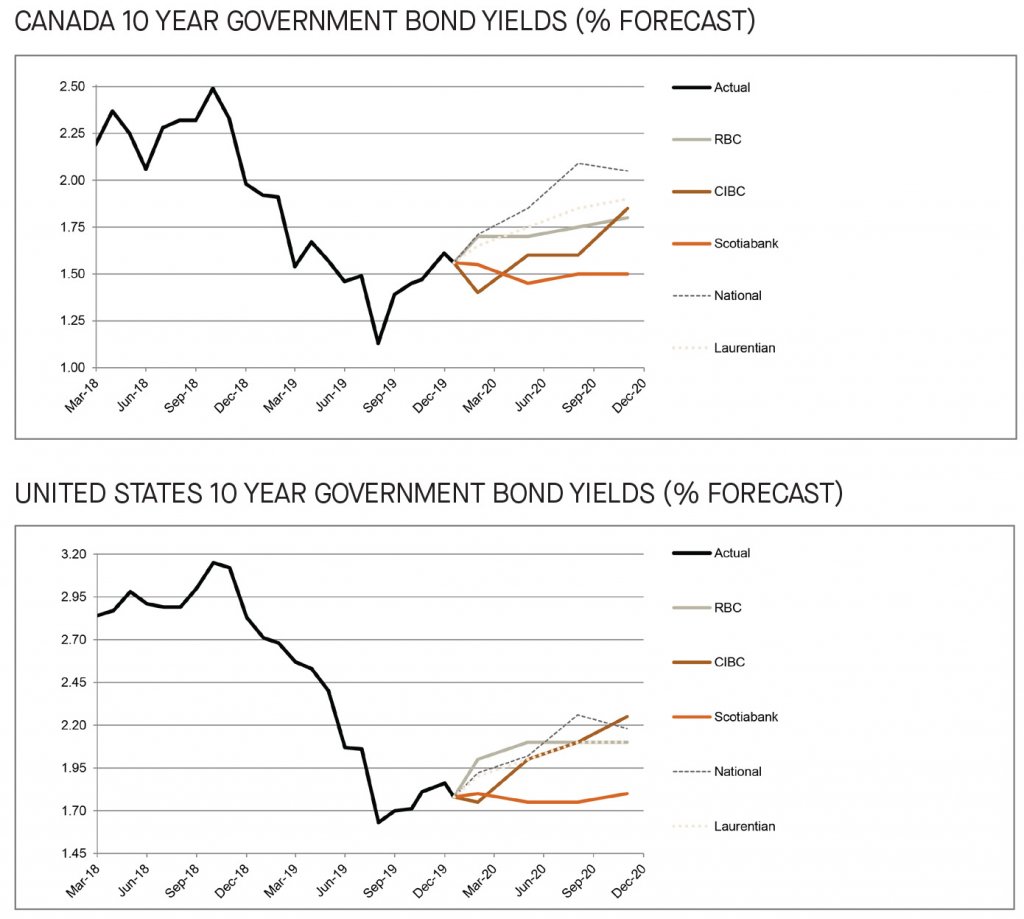 As at the date of publication, the long-term bond yielded 1.7% in Canada and 2.2% in the US. The surveyed banks have maintained their forecast of the 30-year bond yields with the view that global trade tension will continue to be a variable in keeping the yields low (with a small yield spread to the 10-year bond). Overall, the surveyed banks expect the 30-year government bonds to rise modestly, and yield between 1.8% (Scotiabank) and 2.1% (National) in Canada, and 2.3% (Scotiabank) to 2.6% (CIBC) in the US by Q4 end of 2020. 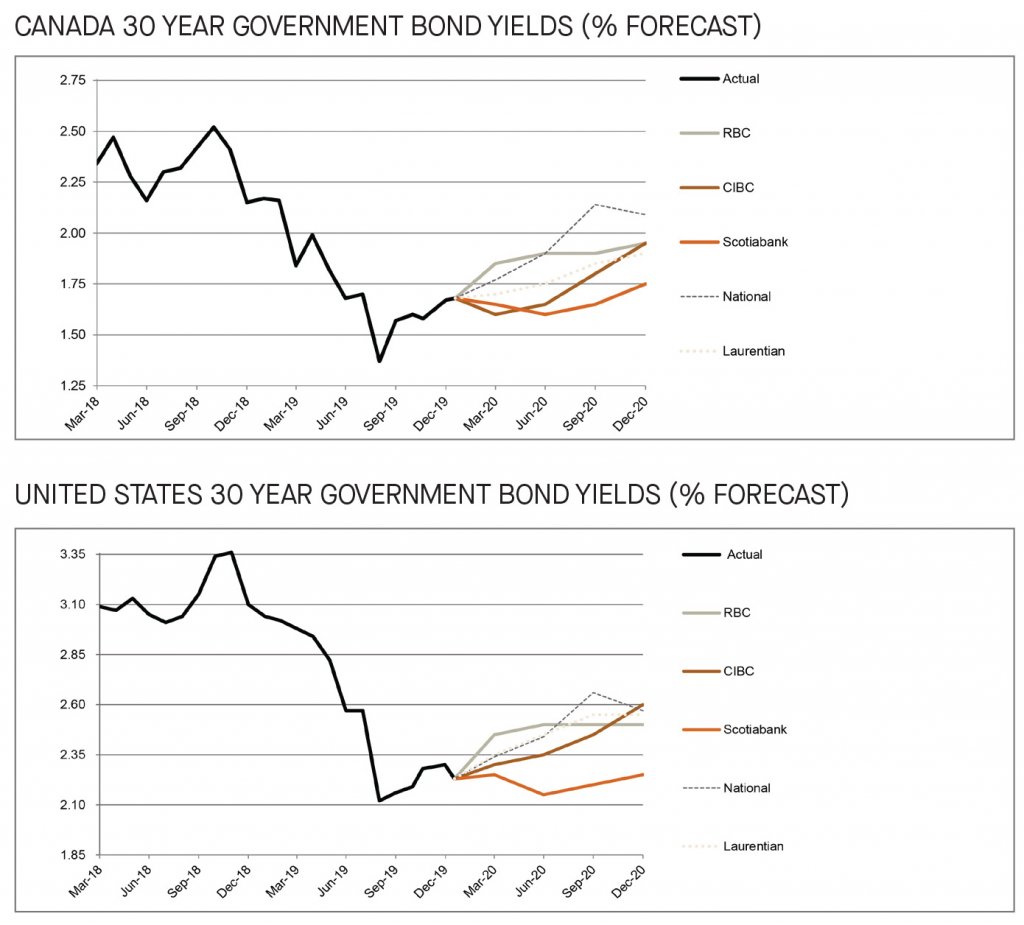 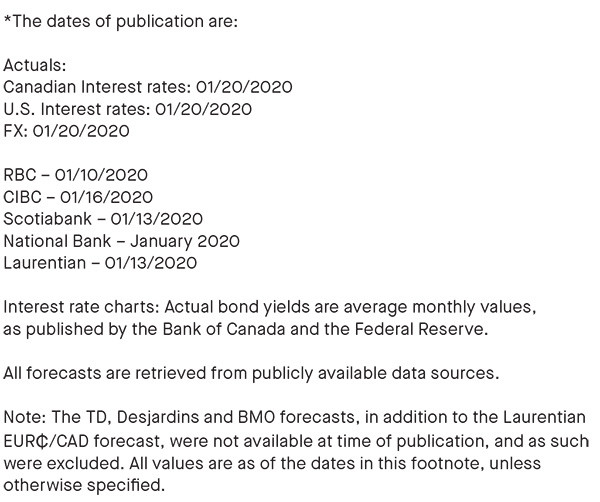