The Loonie saw its biggest gain since January against the USD in June, returning it to summer-2018 levels. This makes the Loonie the best performing G10 currency so far this year. The recent CAD surge was supported by (1) the CPI coming in above expectations, (2) the perceived economic divergence from many developed world counterparts, including the U.S. where the Fed struck a dovish turn on policy, and (3) higher oil prices. In its July Monetary Policy Report, the Bank of Canada (“BoC”) highlighted that Canada is moving back up to its growth trend, adding that escalating trade conflicts are the biggest downside risk to the outlook globally and in Canada.[1] The surveyed banks are in consensus that the Loonie still has some modest near-term upside, with a caveat that it may face headwinds versus the USD should the global economic outlook darken.

South of the border, the Federal Open Market Committee’s (“FOMC”) June meeting was more dovish than anticipated where roughly half the committee members think that two rates cuts by the end of the year are appropriate. The dovish monetary rhetoric led to a sharp decline in the trade-weighted USD. National noted that this is the first time in years where the Fed’s dot plots point to a decline in interest rates, while RBC countered that the change in stance should not be mistaken as the start of a full-on easing cycle, but rather the cuts are providing more accommodation to offset trade headwinds. Overall, compared to last month’s publication, the surveyed banks are in consensus that the pair will trade between 76.0 and 78.0 USȼ/CAD by the end of 2019.

Recent economic activity in the Eurozone suggests that trade and manufacturing (mainly in Germany) has been particularly weak. In recent years, this sector of the economy has served as the engine of the Eurozone’s growth run – so the negative indicators are now tempering growth forecasts. Another factor that is negatively affecting the Eurozone is the persistently low and declining inflation, currently stuck around 1.0%, which is below the European Central Bank’s (“ECB”) targets. Overall, persistently low inflation, a moderated growth outlook and other monetary authorities already in easing mode, the expectations are now that the ECB may follow suit.

RBC noted that with current economic fundamentals, it now sees the ECB’s deposit rate being lowered further into negative territory over the second half of the year. National highlighted that it does not see a lot of upside for the EUR as it is faced with growing downside risks with Brexit scheduled for October and potential U.S. tariffs on the auto-industry looming in November. Overall, and compared to last month, the forecasts of the surveyed banks suggest a slight weakening of the EUR versus the CAD; with the currency pair expected to trade between 66.6 and 69.4 EURȼ/CAD by the end of 2019.

As widely expected, on July 10th, the BoC maintained its key interest rate at 1.75%. The consensus amongst the surveyed banks is for the BoC to remain neutral and not alter its interest rate in either direction for the remainder of 2019. In the U.S., the market will be paying close attention to the actions of the FOMC at its July 31st meeting where it is widely expected to cut interest rates, for the first time since 2008. CIBC highlighted that the Fed’s July rate cut is a done deal but just how far rates will be cut is still up for debate. Overall, given the economic data, and the Fed’s dovish stance, the surveyed banks are currently fully pricing one rate cut, with modest odds for two rate cuts by year-end. 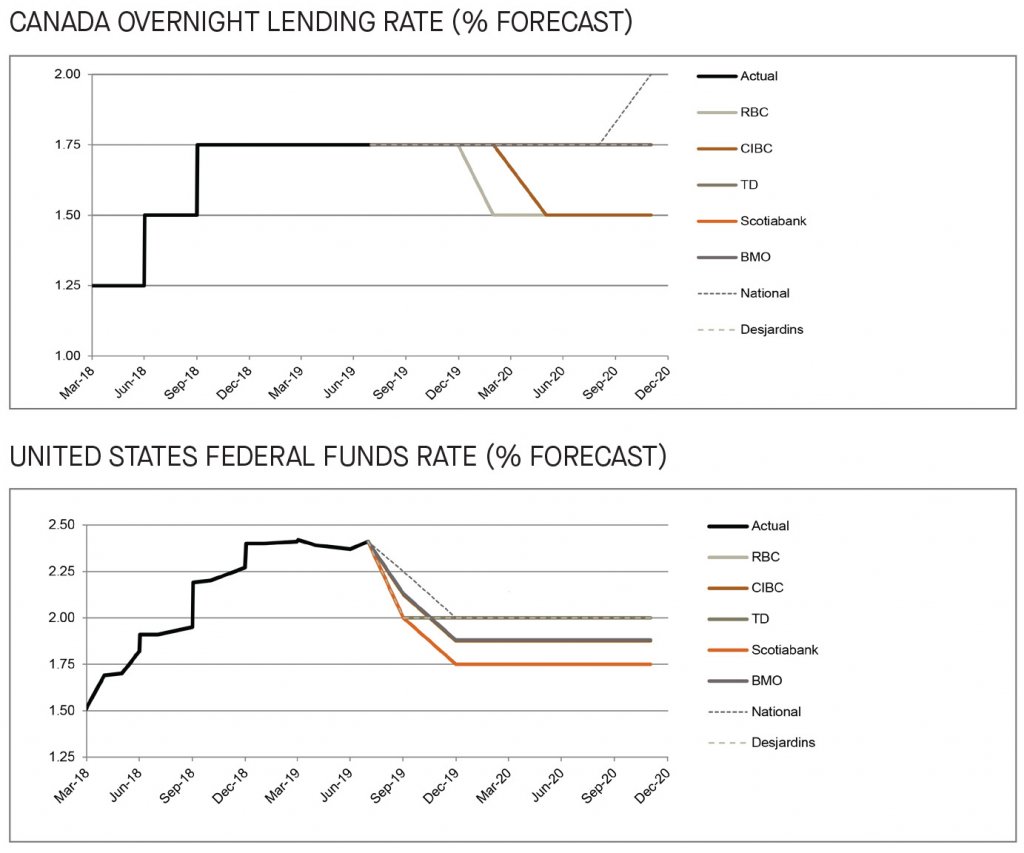 Notably, since last month’s publication, we observe significant downward adjustments to the U.S. short-term bond yield forecasts compared to the Canadian short-term yield forecasts, effectively narrowing the interest rate differential. The surveyed banks anticipate lower U.S. yields due to muted inflation, a dovish Fed and mounting trade protectionism. Overall the surveyed banks anticipate that the 2-year government bonds will yield between 1.4% and 1.6% in Canada and 1.6% and 2.0% in the U.S. by the end of the 2019. 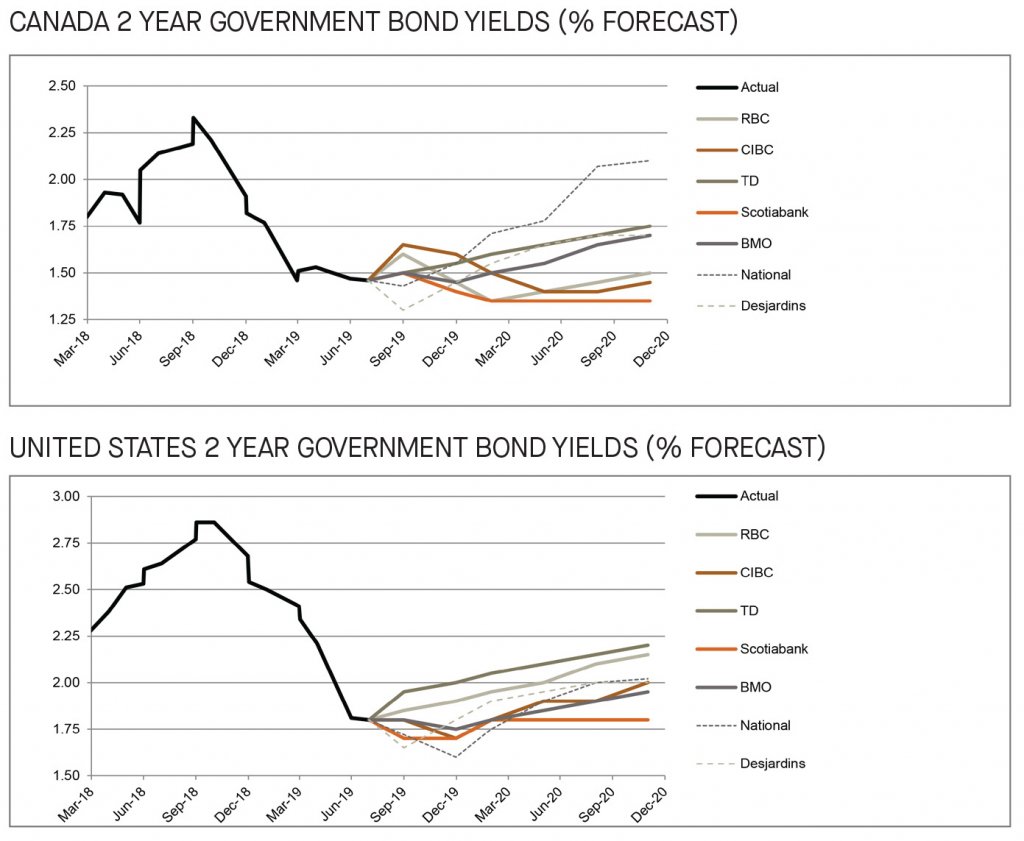 Compared to last month’s publication, we observe downward adjustments for both the Canadian and U.S. 10-year government bond yield forecasts. TD noted that the U.S. 10-year yield decreased 0.5%, pushing below an important psychological threshold of 2% in the span of 2 months. This move brought the 10-year yield below the 2-year yield, effectively inverting the curve which has historically served as a warning signal that precedes economic recessions. Correspondingly, TD also highlighted that global risks also caused the Canadian 10-year bond yield to fully invert to a level below the yield on both the 3-month and 2-year. Overall, by the end of 2019, the surveyed banks forecast that the 10-year government bonds will yield between 1.6% and 1.8% in Canada and 2.0% and 2.2% in the U.S. 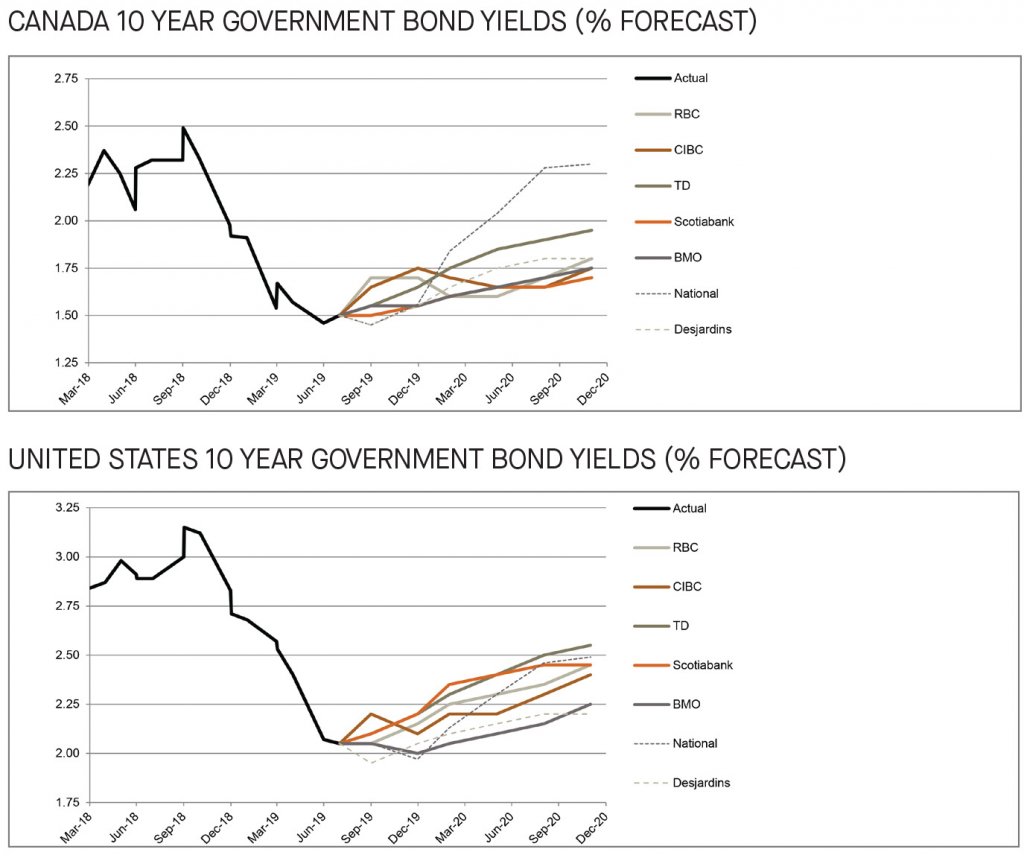 The long-term government bond yield forecasts were impacted in the same way as the 2-year and 10-year government bond yield forecasts. Notably, BMO is the only bank that made minor upward adjustments for both Canadian and U.S. 30-year bond yields as it expects these yields to be more resilient especially at the long end of the forecast as the Fed are expected to eventually reverse its 2019 expected cuts. TD is on the high end of the Canadian forecast, while Scotiabank is on the high end of the U.S. forecast, expecting the long bond yields to rise to 1.9% and 2.7% by the end of 2019, respectively. 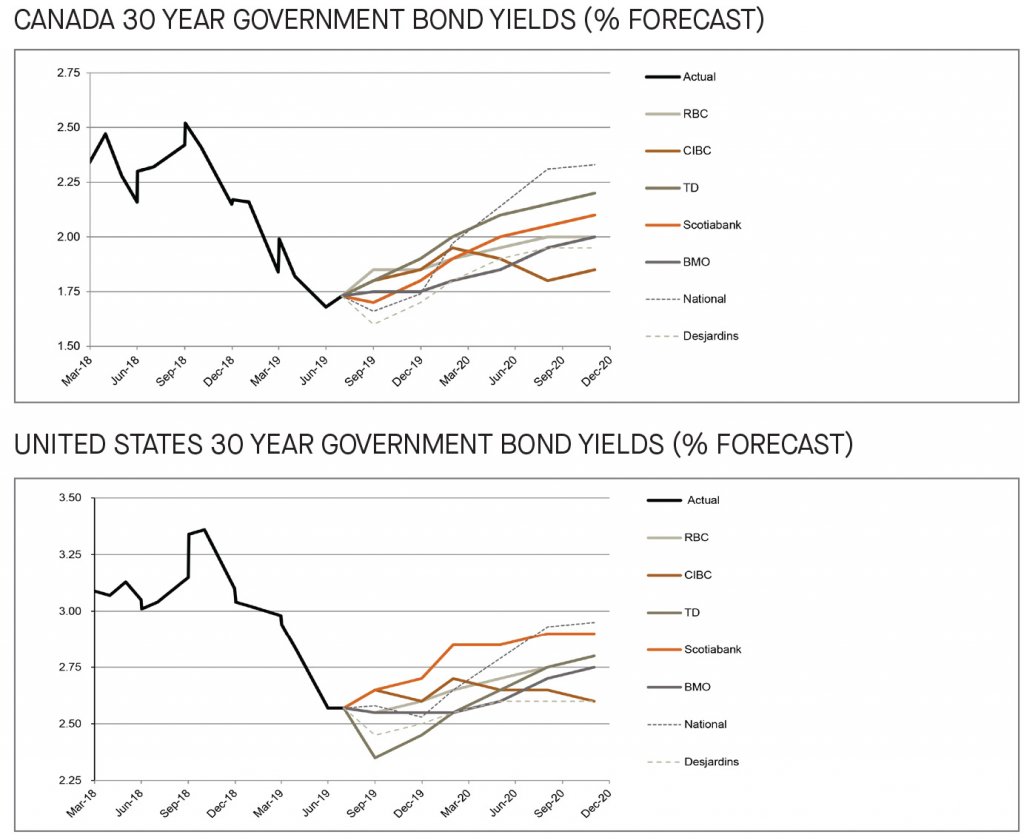 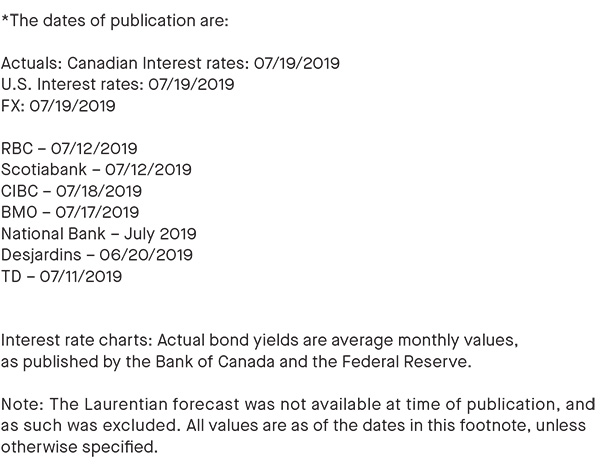