Much of what was reported on was published prior to the pandemic really ramping up. Information may have since been revised. As the situation changes now almost day-by-day, major banks and reserves continue to adjust accordingly.

The Bank of Canada’s (BoC’s) Governing Council cut the Overnight Rate by 50 basis points on both March 4th and March 13th, leaving it currently at 0.75%. The move followed similar cuts by other leading central banks and was taken in response to the serious macroeconomic impact of the COVID-19 outbreak and to shore up crashing stock markets.

On March 15th, the BoC joined the Bank of England (BoE), the US Federal Reserve, the Bank of Japan (BoJ) and the Swiss National Bank (SNB) in a coordinated action to provide liquidity through established USD liquidity swap line arrangements. The BoC stated it would release a full update — including its outlook for the economy and inflation — at the next rate decision on April 15th. In a press conference on March 18th,[1] BoC Governor Poloz also announced the broadening of the Canadian government’s bond buyback program, adding new term repo operations and introducing a new Bankers’ Acceptance Purchase Facility to begin on March 23rd.

In an unprecedented move after an emergency meeting on Sunday, March 15th, the US Federal Open Market Committee (FOMC) slashed the Federal Funds Rate to 0-0.25% from 1.00%-1.25% and announced it will buy $700 billion in Treasury and mortgage-backed securities. The Fed stated it will hold rates low “until it is confident that the economy has weathered recent events and is on track” to achieve its goals. Additional U.S. stimulus packages are presently being debated at both the state and federal government levels.

On March 17th the Fed announced the establishment of a Primary Dealer Credit Facility (PDCF)[2] to support the borrowing needs of U.S. households and businesses. The PDCF becomes available on March 20th for six months and will offer overnight and term funding with maturities of up to 90 days. On March 19th,[3] the Fed also announced the establishment of swap lines with certain other central banks to provide further global liquidity, including liquidity of up to $60 billion for the central banks of Australia, Korea, Mexico, Brazil, Singapore and Sweden and up to $30 billion for the New Zealand, Norwegian and Danish central banks.

On March 6th, Statistics Canada reported a 0.1% monthly increase to the Canadian Unemployment Rate to 5.6%, despite the addition of 30.3K full-time jobs in February. The agency’s website says it plans to continue releasing “mission critical” data essential to the proper functions of the Canadian government and economy to deal with the current crisis but will be postponing all other data releases until further notice.

Due to the effects of the COVID-19 outbreak that sparked a notable rise in risk aversion and a sharp drop in the price of oil that remains one of Canada’s key exports, the Canadian dollar weakened significantly versus the US dollar to trade as low as 0.6826 on March 18th. Of banks surveyed, the Canadian dollar was expected to trade between 0.7140 and 0.7300 (Scotiabank), 0.7300 to 0.7400 (CIBC), and 0.7246 to 0.7463 (RBC) during 2020, but the lower side of each range has now already been breached, so those forecasts will be revised lower.

In a press conference on March 18th, BoC Governor Poloz told reporters that, “The Bank of Canada is taking concerted action to support the Canadian economy during this period of economic stress. We have introduced these new measures and we are watching how market performance improves. We are closely monitoring market developments and we stand ready to provide all the liquidity the financial system needs so that it can continue to serve Canadians.”

Speaking on March 15th after the FOMC drastically cut the Fed Funds Rate to 0.0%-0.25% from 1.00%-1.25%, Fed Chair Powell stated that, “We are prepared to use our full range of tools to support the flow of credit to households and business, to help keep the economy strong, and to promote our maximum employment and price stability goals.”  Banks surveyed before that surprise move already expected the FOMC to lower rates for the remainder of the year, with Scotiabank projecting 0.25%, CIBC estimating 0.625% and National forecasting 0.75%, although those forecasts will probably soon be revised lower. 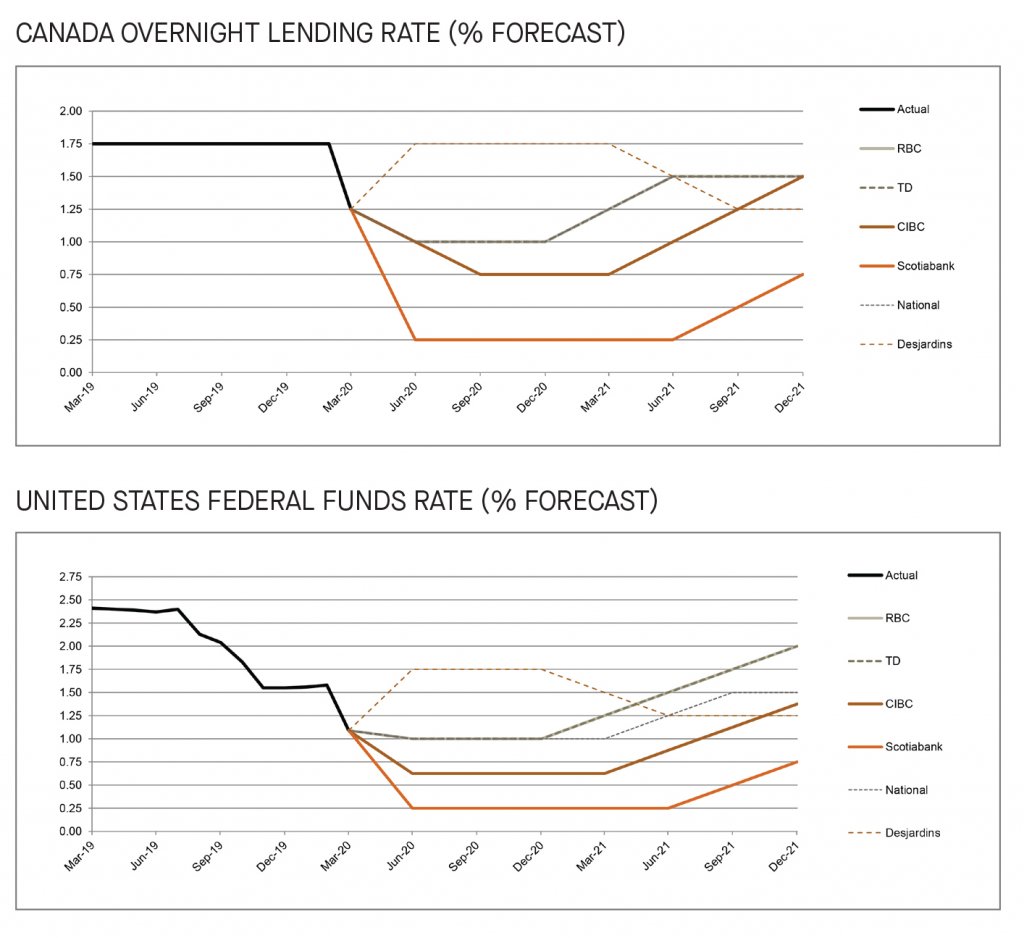 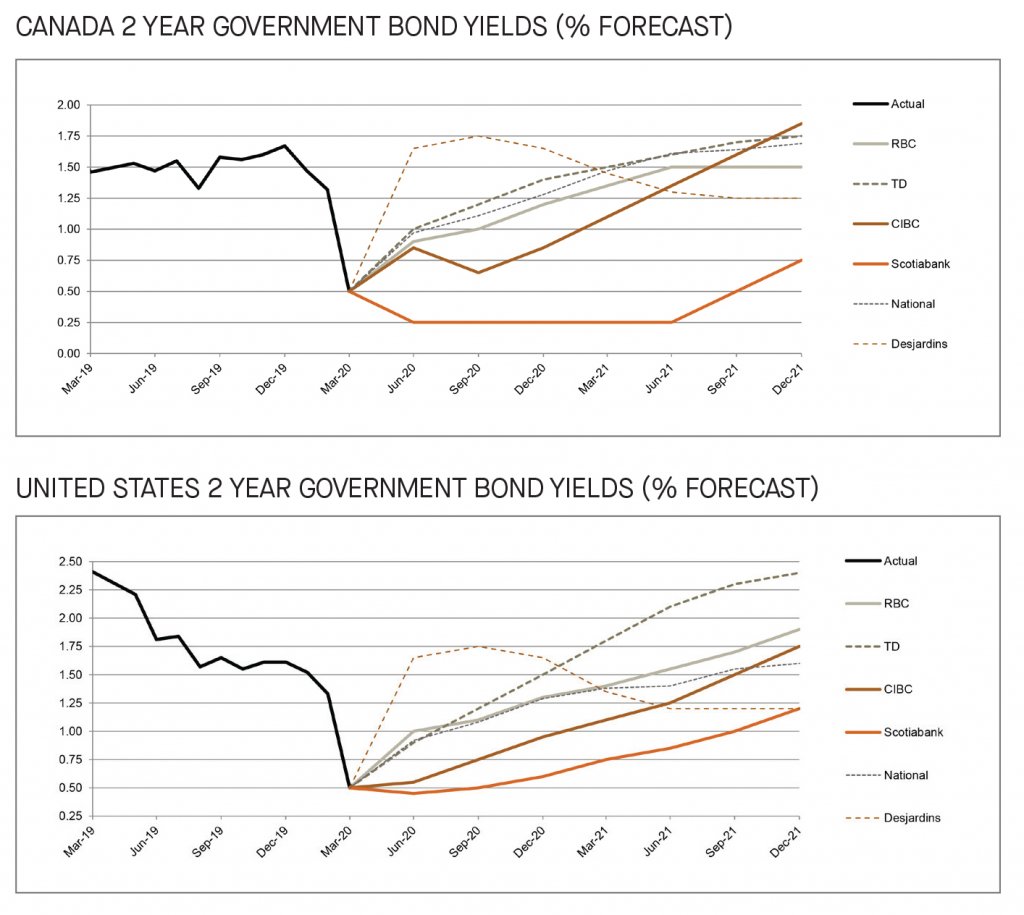 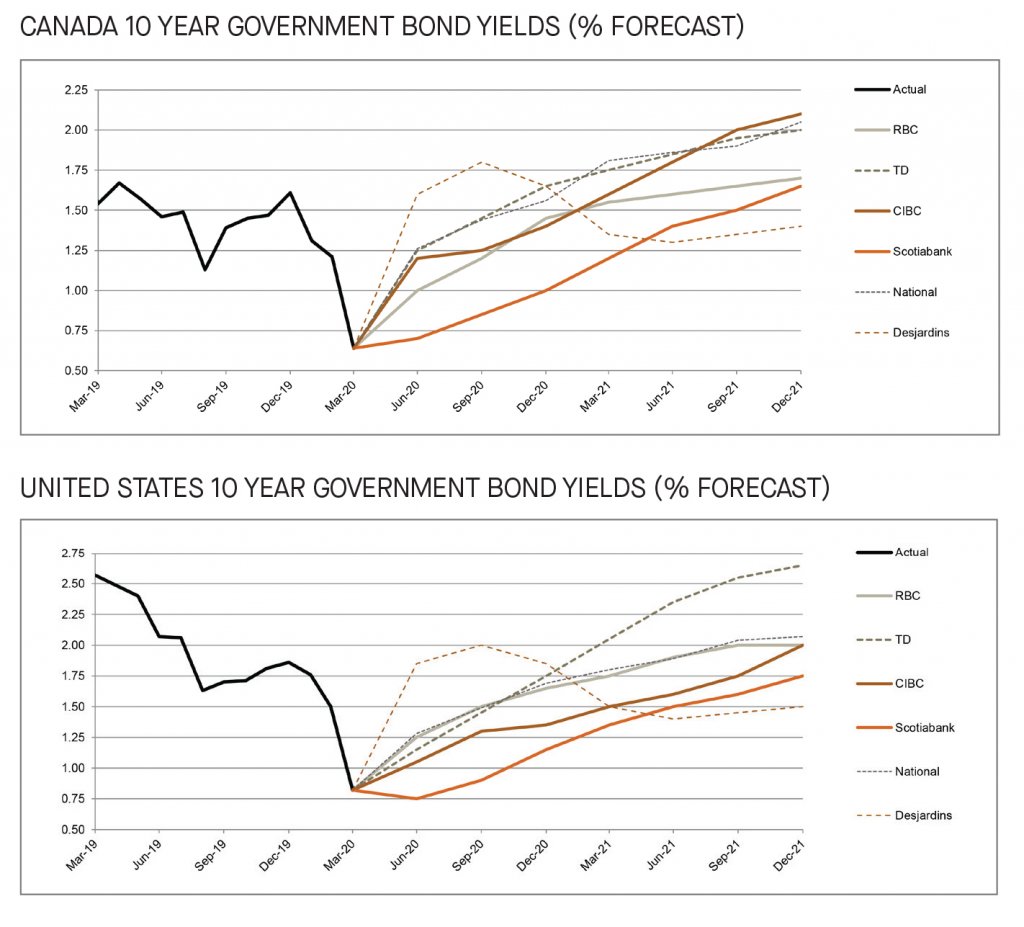 30-year bond yield forecasts were mixed among the surveyed banks 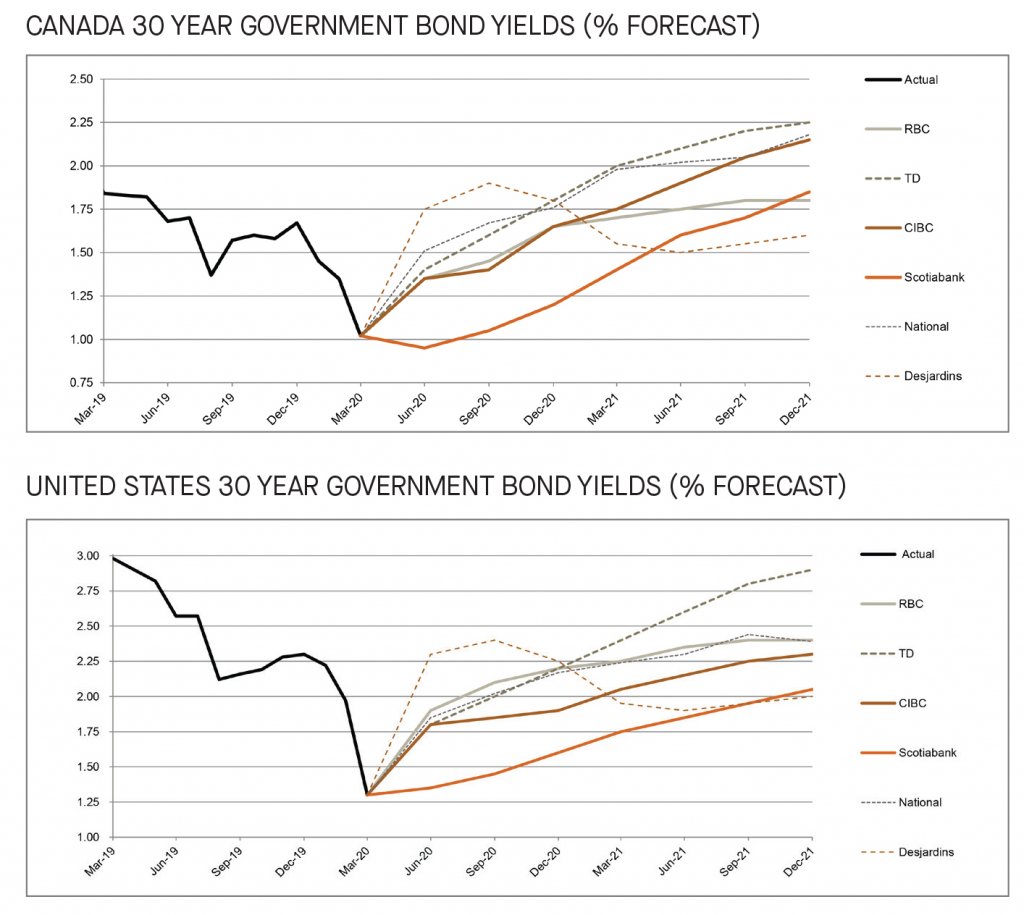 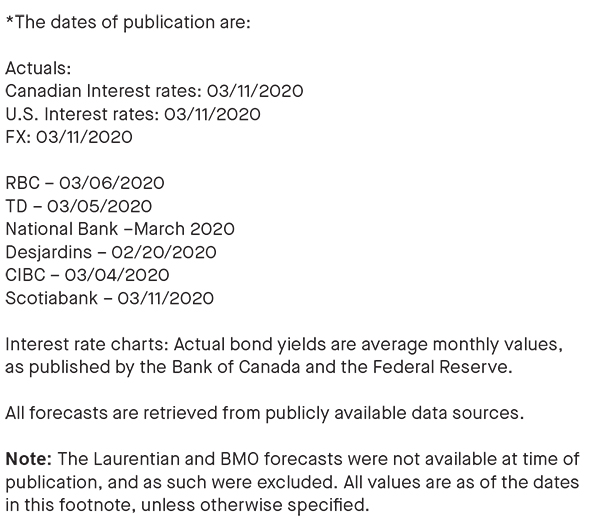