The U.S. and Canada reached an agreement regarding aluminum and steel tariffs on May 17th, but to little benefit for the relative strength of the CAD which traded at 74.4 US¢/CAD as at the time of publication. The Bank of Canada (“BoC”) has officially shifted into neutral in April, noting the current degree of monetary policy accommodation is warranted. Additionally, the BoC lowered their 2019 growth forecast to 1.2% (vs 1.7% in January and 2.1% in October), but expects growth to rebound to a 2.0% pace in 2020-21. The Loonie has largely been range-bound, having traded between 73.0 and 77.0 U.S. cents since last summer. TD believes this is due to a handful of issues such as the uncertainty regarding global trade and the positive impact the tariffs hikes have had on the Greenback which are limiting the relative strength of the Loonie. In order to remain competitive in global trade exports, CIBC believes the CAD will likely weaken towards the end of 2020. Read More

In the United States, RBC highlighted that although domestic spending slowed in Q1 of 2019, GDP growth picked up by 3.2% on an annualized basis, which was higher than the 2.0% expected. National noted that the USD has continued to gain ground against many of the major currencies since the beginning of 2019 despite the Federal Reserve’s rhetoric that it is unlikely to raise rates through 2019. Overall, the surveyed banks are largely in consensus that the currency pair trade between 74.0 and 78.0 US¢/CAD through 2019. Thereafter, the banks lack consensus as CIBC expects the pair to trade as low as 72.00 US¢/CAD while Scotiabank expects 81.0 US¢/CAD by the end of 2020.

The Eurozone achieved better than expected results as GDP growth doubled from 0.2% to 0.4% in Q1 of 2019, while continuing to experience positive improvements in labor market conditions, as noted by RBC. Throwing some caution to the wind, RBC also highlighted that Eurozone’s core inflation remains stuck near 1%, which is well short of the European Central Bank’s (“ECB”) target. As there is still not enough evidence the economy is generating inflationary pressure, BMO continues to expect the ECB to hold on policy tightening. BMO references the ECB’s Targeted Long-Term Refinancing Operations (“TLTRO-III”) plans which are expected to be launched in September as a key factor in assessing its outlook. Overall, the banks are in consensus that they expect the ECB will remain neutral until at least the end of 2019, and anticipate the EUR¢/CAD will trade between 58.1 and 67.8 EUR¢/CAD through Q4 of 2020.

On May 29th, the  the Bank of Canada (“BoC”) opted to keep its policy rate unchanged at 1.75%, noting that U.S.-China trade ware is “heightening uncertainty about economic prospects”, adding that “the degree of accommodations being provided by the current policy rate remains appropriate”.[1] Governor Poloz, and as highlighted by National, stated that the greatest threat to the Canadian economy was the risk of a global trade war. The last Monetary Policy Report[2] published on April 24th contained a surprising element whereby the BoC lowered its 2019 GDP growth forecast from 1.7% in early January to 1.2%. RBC suggested that this revision likely reflects the slowing housing market, reduction in business investment and lower fiscal stimulus in Ontario. In the U.S., as expected the Federal Open Market Committee (“FOMC”) held the key interest rate range steady at 2.25 to 2.50%. National highlighted that the FOMC still views its monetary policy stance as appropriate and believes the FOMC is in no rush to get back to raising rates for 2019. Overall the consensus amongst the surveyed banks is that the Fed is unlikely to hike until at least 2020. [/accordion-item] [/accordion] 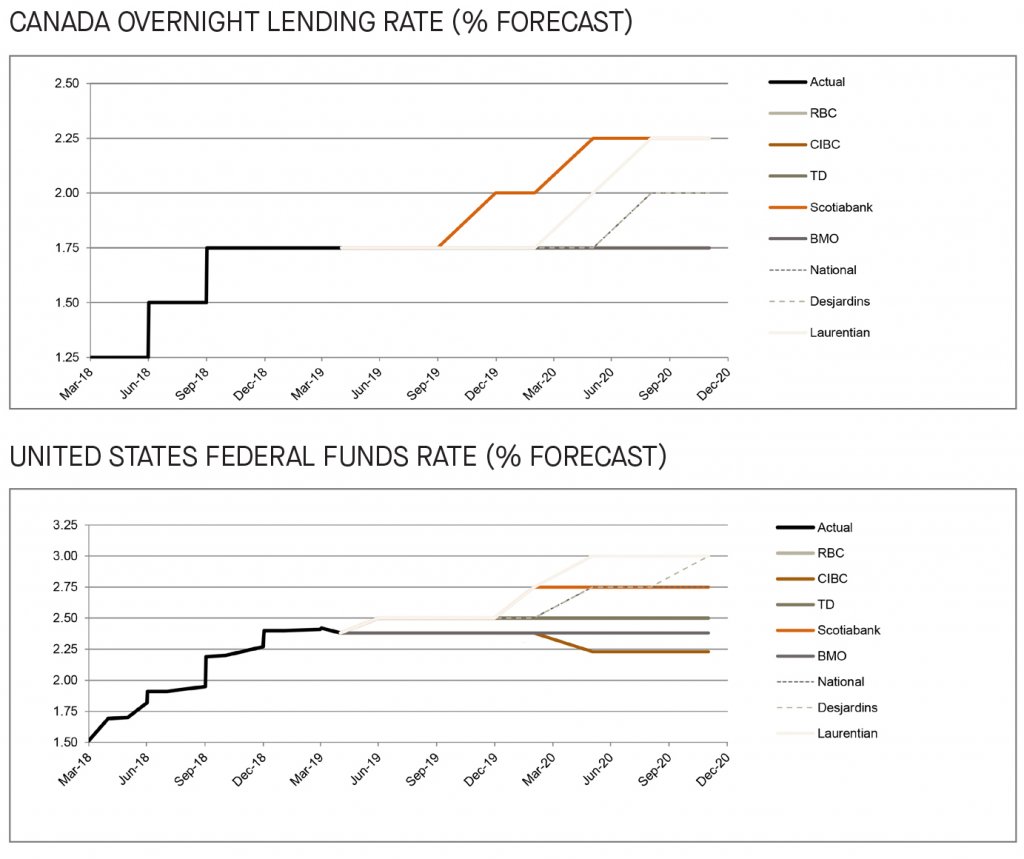 2-year bonds remain stable for now in U.S. and Canada

The Canadian and U.S. 2-year government bond yield forecasts saw minor downward adjustments since last month’s publication. Notably, and as highlighted by RBC, since the beginning of 2019 the short term Canadian bond yields have significantly dropped due to both the BoC and the Fed’s dovish stance. TD sees some, but limited, upside to yields, noting that the U.S.-Canada interest rate spreads will remain strained. Overall, the surveyed banks lack consensus regarding the trend of the 2-year bonds and are forecasting that the Canadian bond will yield between 1.5% and 2.4% while the U.S. bond will yield between 2.4% and 3.2% by the end of 2020. 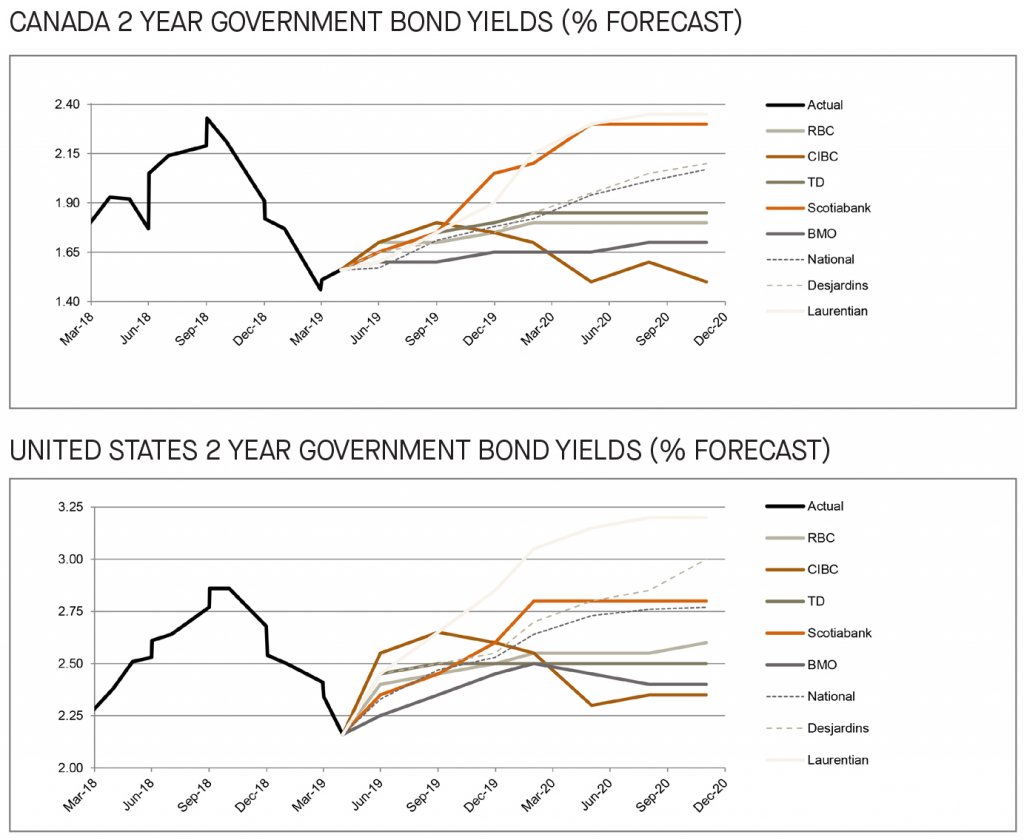 Notably, as highlighted by TD, the Fed’s dovish stance on policy, which was followed by several Fed members hinting an openness to cutting interest rates, lead to an inversion of the 10-year bond yield curve against the 3-month yield. Although this held for few days, it captured considerable attention as this has been an indicator to predicting recessions in the past. BMO believes that although this is a recession signal, this occurrence is not as reliable as it used to be given that the curve is now inherently flatter than before, owing to less inflation volatility, lower terminal policy rates and QE’s legacy. The Canadian 10-year government bond yield saw no material changes since last month. Overall and consistent with prior month’s publication, the expectations of an upward trend for the Canadian and the U.S. 10-year bond yields remains intact through to the end of the year. 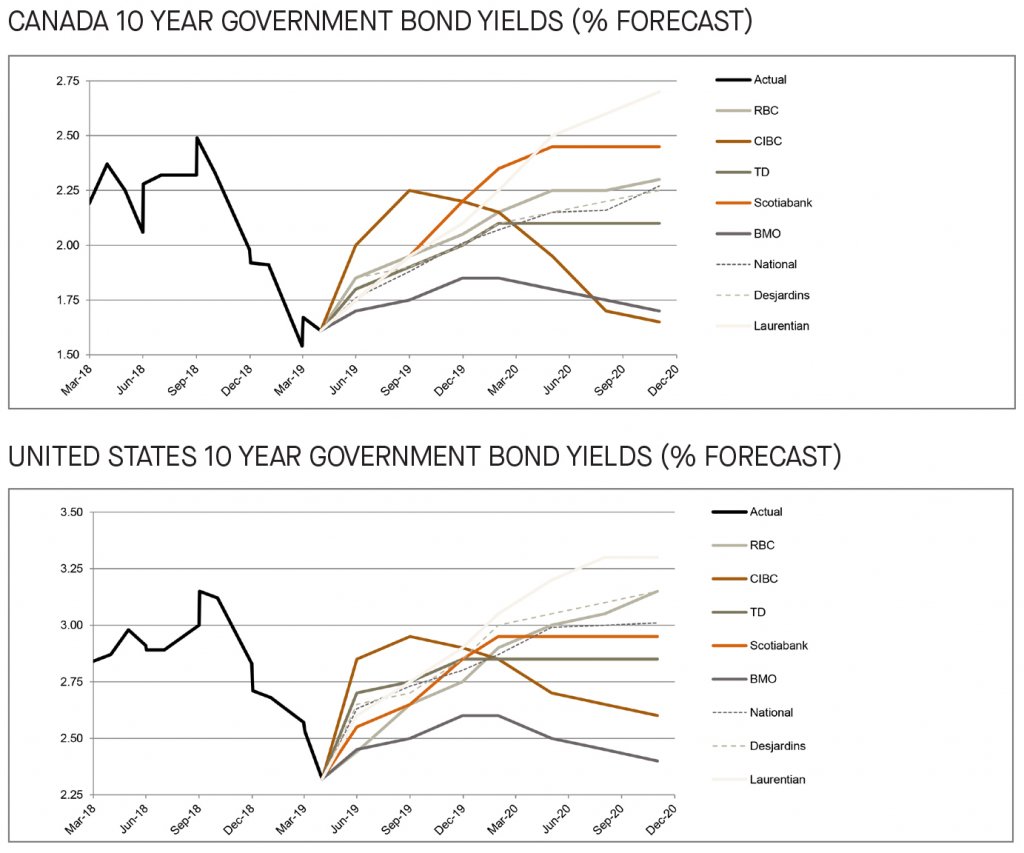 Consistent with last month’s publications, the forecasts for the 30 year government bonds yields in the U.S. and Canada remain fairly unchanged with minor downward adjustments made only by BMO. Low inflation, trade uncertainties and geopolitical risks are amongst the headline risks spooking investors and keeping long-term bond yields near their recent lows. The 30-year bond yields are expected to rise in both Canada and the U.S. for the remainder of 2019 but the banks lack consensus regarding the trend for the yields through 2020. Laurentian is on the high end of the Canadian forecast, while RBC is on the high end of the U.S. forecast, expecting the long bond yields to rise to 2.8% and 3.7% by the end of 2020, respectively. 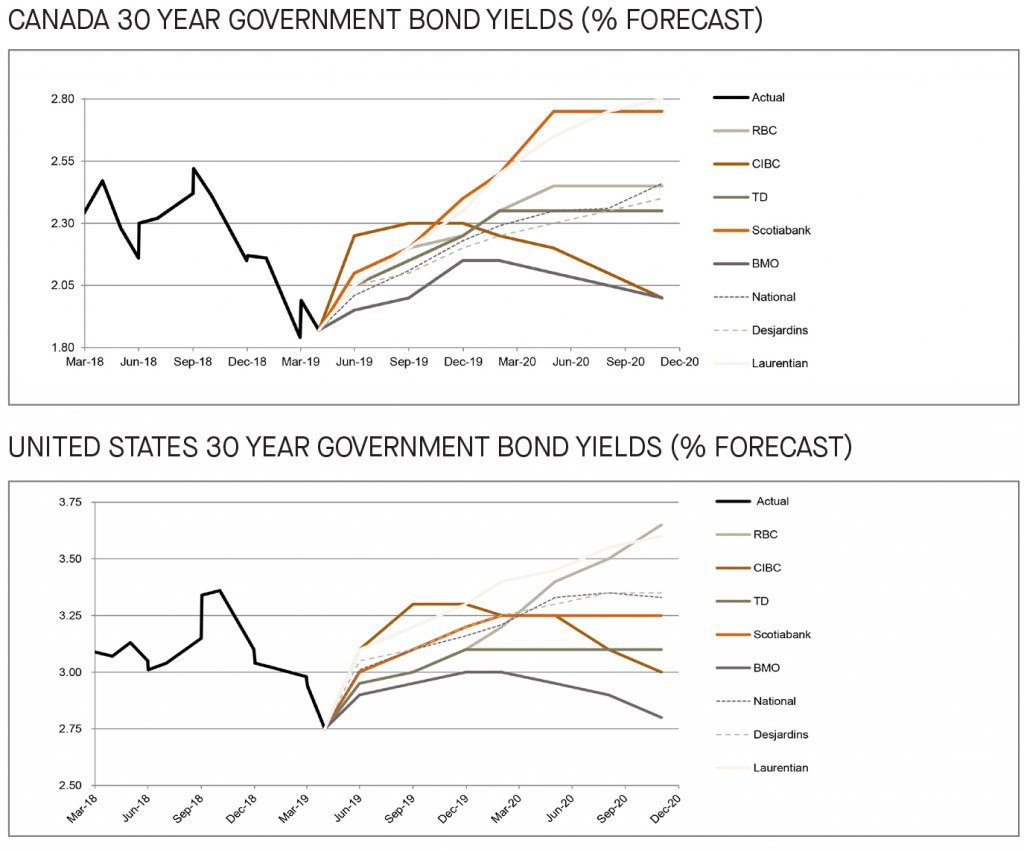 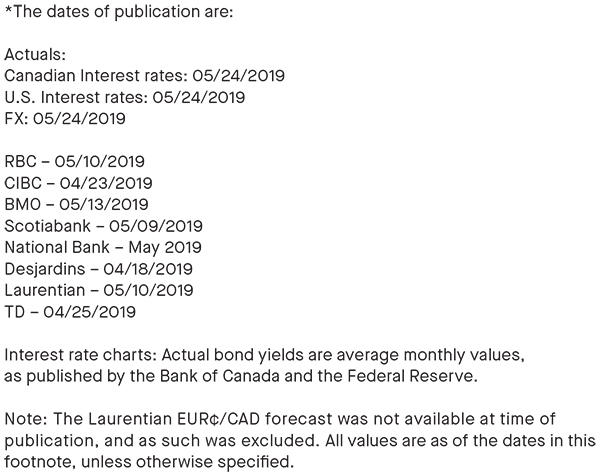