November brings reality check for the Great White North, optimism for the US, and a waiting game for the Eurozone.

The Bank of Canada (“BoC”) resisted the urge to cut and held its key interest rate at 1.75% at its October meeting. The BoC again highlighted Canada’s strong economic data namely, stable consumer spending, strength of the employment sector and the growing housing market. However, the BoC noted that the resilience of the Canadian economy has its limits, given the uncertainty at the international level. As openly expressed by Governor Stephen Poloz: “resilience of Canada’s economy will be increasingly tested as trade conflicts and uncertainty persist”.[1] In fact, the BoC had already downward adjusted the growth rate for 2020 (from 1.9% to 1.7%) and 2021 (from 2.0% to 1.8%).[2] RBC anticipates that “the BoC’s patience will eventually run out, with persistent trade uncertainty and below-trend-growth around the turn of the year prompting a rate cut in early 2020”.[3] Still, the Canadian dollar experienced a strong October as it ended the month at 75.8 US¢/CAD. However, this was short-lived as dovish BoC rhetoric caused the CAD to decline in early November. At the date of publication, it was trading at 75.5 US¢/CAD.

South of the border, the Federal Open Market Committee (“FOMC”) delivered a much anticipated interest rate cut for the third time in 2019 on October 31st. The Fed hinted that their “mid-cycle adjustment” is likely over as their monetary stance remains appropriate for 2019. The latest US economic indicators (as of October) were better than expected with consumer spending up nearly 3%, along with slight improvements observed in Purchasing Manager Index (PMI) data. The Institute for Supply Management (ISM) non-manufacturing index bounced two points from the previous month’s three-year low; the manufacturing index inched slightly but remained in contractionary territory. The surveyed banks emphasized an optimistic view on the trade front as they are forecasting a trade truce between the US-China before year-end. This positive backdrop allowed the Greenback to steadily rise in early November compared to a trade-weighted basket of major currencies. Overall, the surveyed banks are in general consensus, forecasting the currency pair to trade between 75.0 (CIBC) and 78.0 (National) US¢/CAD through Q1 of 2020.

The European Union (“EU”) postponed (for a third time) the Brexit deadline until the end of January 2020. UK’s Prime Minster Boris Johnson is hoping Brexit may get done before the new year as the general elections are being held on December 12th. Given his track record of failed delivery, such rhetoric was received rather cautiously. On October 24th, the European Central Bank (“ECB”) held its last monetary policy meeting with President Mario Draghi which left its main policies and forward guidance unchanged. The new ECB President Christine Lagarde (former head of International Monetary Fund) will hold her first policy meeting on December 12th. During October, the EUR experienced gains as it advanced more than 2% against the trade weighted USD as noted by National Bank.[4] Talks of a truce between US and China also assisted in boosting the EUR. The surveyed banks anticipate the pair to trade between 67.0 (CIBC) and 71.4 (RBC) EUR¢/CAD through Q1 of 2020.

On October 30th, the BoC opted to maintain its benchmark interest rate at 1.75% for its eighth consecutive meeting. Given the tone of the BoC at the last meeting, half of the surveyed banks expect monetary easing from the BoC hereafter, forecasting a rate cut in the first quarter of 2020. The FOMC cut the target range for the Fed fund’s rate by 25 basis points to 1.5% to 1.75% (as anticipated by most of the surveyed banks). Recent US economic data such as an unemployment rate of 3.6% and consistent GDP growth will likely have the Fed on the sidelines into the first quarters of 2020. Overall the surveyed banks are expecting the FOMC to hold its key interest rate throughout 2020. Whereas in Canada, the surveyed banks are divided in that half anticipate the BoC to cut and half to hold. 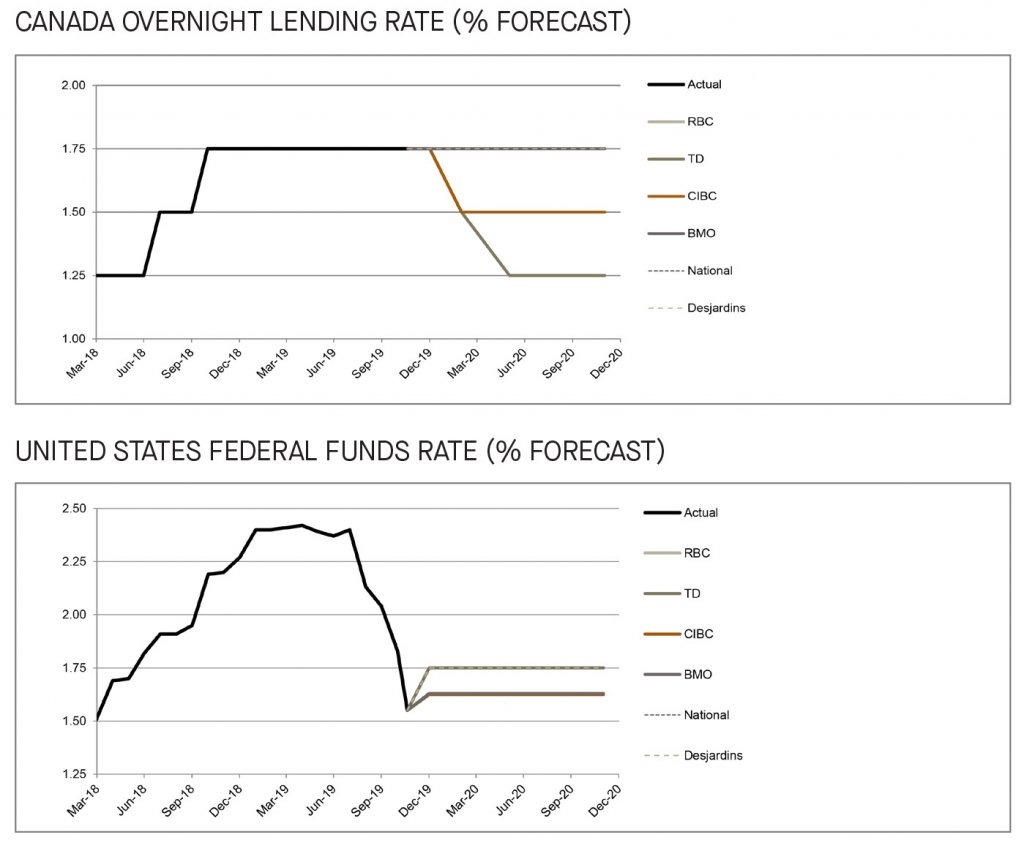 As of the date of this publication, 2-year government bonds yielded 1.52% and 1.60% in Canada and the US, respectively. Compared to last month’s publication, the surveyed banks have largely revised expectations to reflect less of a decline in the 2-year yields through the first quarter of 2020. The upwards adjustments in their forecast are associated with the recent economic data (stable for Canada and better than expected in the US), and the anticipation of a trade truce to finally be reached between the US and China. The surveyed banks are in consensus that both the US and Canada shall largely remain steady, anticipating the 2-year government bond yields to vary from 1.4% to 1.7% in Canada, and 1.6% to 1.7% in the US, by the first quarter of 2020. 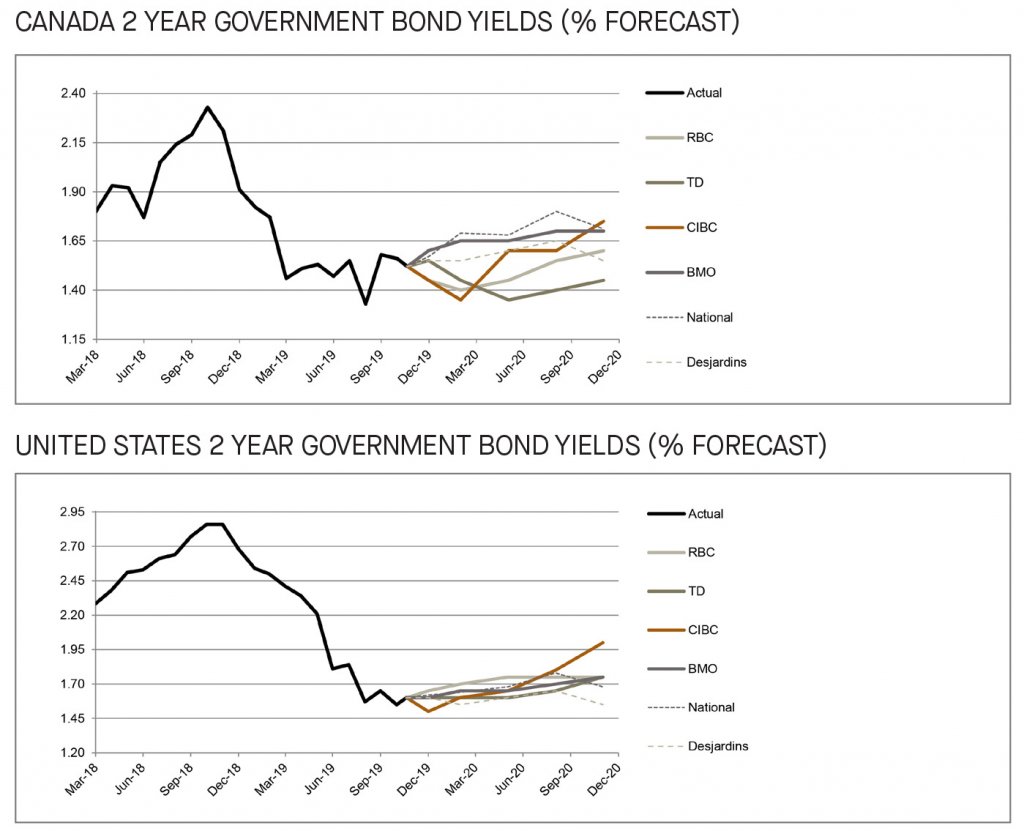 As of the date of this publication, the 10-year bond yielded 1.4% in Canada and 1.8% in the US. The anticipation and optimism of China and the US finally reaching a truce had a positive impact on the 10-year bond yields, a historically important economic indicator. Most of the surveyed banks adjusted their forecast upwards and are expecting both US and Canadian bond yields to continue their upward trend. TD highlighted that the market optimism from the talks of a potential trade deal drove the 10-year US treasury up 30 basis points from its September lows during October.[5] Overall, the banks are in consensus in the upward trend of the 10-year government bond yields, expecting them to yield between 1.3% and 1.7% in Canada and 1.7% to 2.0% by the first quarter of 2020. 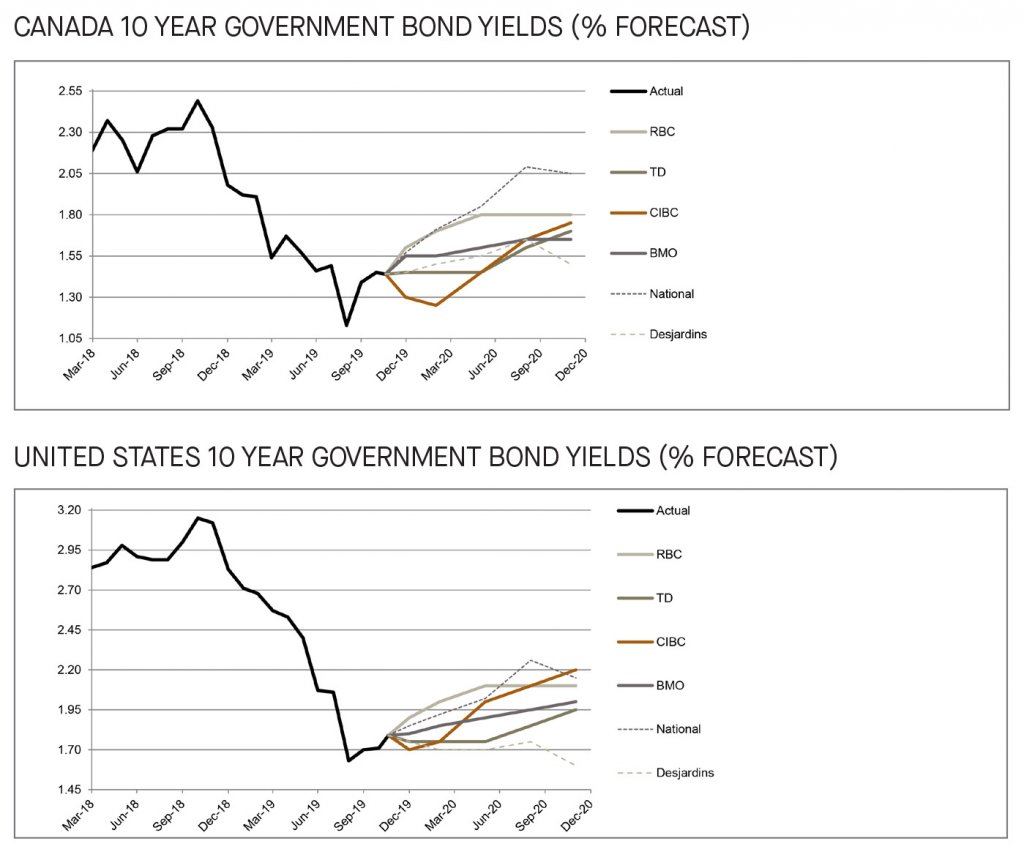 As at the date of publication, the long-term bond yielded 1.6% in Canada and 2.3% in the US. Compared to the last month’s publication, both the Canadian and US long-term bonds yields have been revised upwards by most of the surveyed banks. Although there are still concerns related to the uncertainty of the global economic outlook, the positive movement in the US-China trade negotiations which in turn would provide relief to the global trading woes, gave some comfort to the market and increased long-term yield forecasts. The surveyed banks expect the 30-year government bond to yield between 1.5% to 1.9% in Canada, and 2.2% to 2.5% in the US, by the first quarter of 2020. 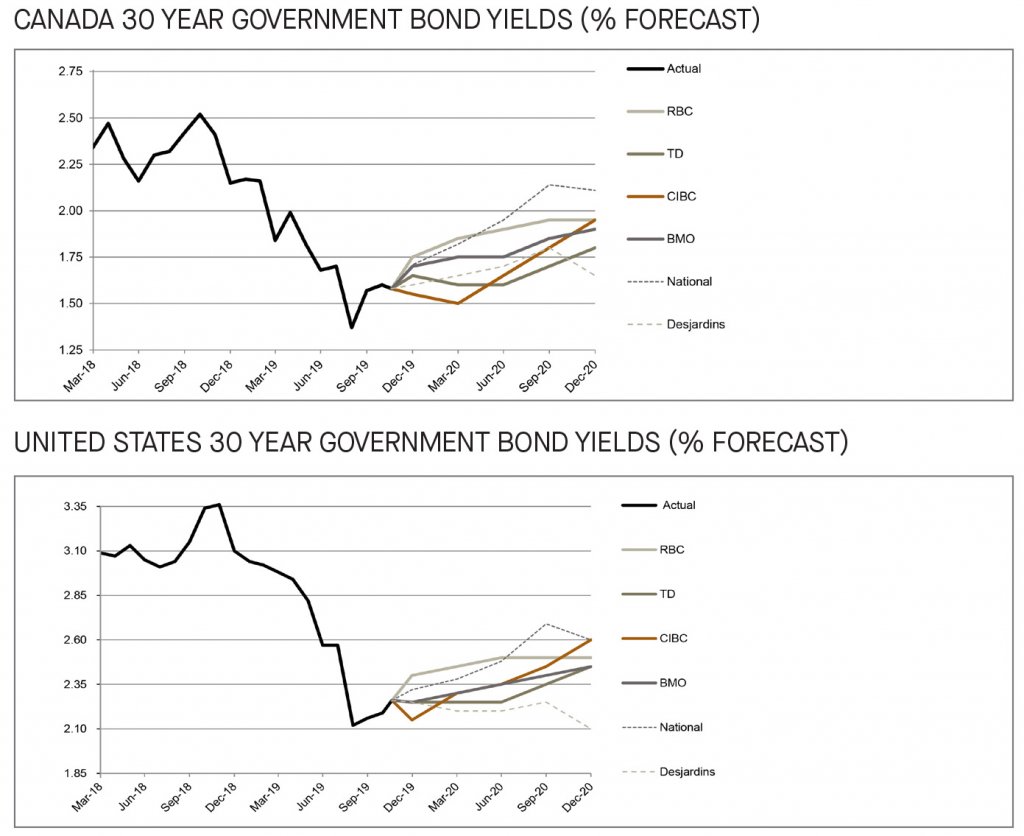 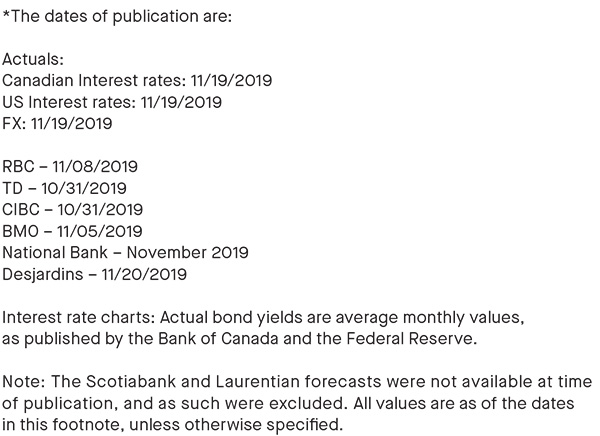