A new NAFTA brings a sigh of relief; Loonie to appreciate

The Bank of Canada’s (“BoC”) economic outlook over the past year has been weighed down by increasing uncertainty on trade policy, causing the central bank to hit the pause button on hikes to its overnight rate. On September 30, Canada, the U.S. and Mexico signed a renewed trade deal dubbed “USMCA”, the United States-Mexico-Canada Agreement.

National highlighted that for most exports to the U.S., Canada was able to maintain tariff free access, caveating that this was not applicable to the tariffs on aluminum and steel exports, where tariffs will remain in place for now. RBC added that Canada should take the new deal as a win, highlighting Canada’s ability to secure an exemption from potentially punitive auto tariffs – a major discussion point in negotiations. In the wake of the new trade deal, the Loonie appreciated, reaching 78.10 US¢/CAD.

In the U.S., Scotiabank is not optimistic about the future of the Greenback as it believes that the positive U.S. growth and strict monetary policy tightening are now mostly priced into current dollar strength.  National is of the same outlook, adding concerns over the bloating U.S. budget deficit. Overall, the surveyed banks are in consensus that the USMCA will lead the BoC to continue its monetary tightening in October, and the Loonie is expected to appreciate against the Greenback. This month’s publications show the banks are forecasting the currency pair to trade between 75.0 and 82.0 US¢/CAD by Q4 of 2019.

During a press conference earlier this month in Indonesia, the European Central Bank’s (“ECB”) president, Mario Draghi, addressed concerns pertaining to Italy given the populist government’s plan to raise public spending in 2019, leading to an increase in budget deficit and public debt. With respect to the government’s rhetoric over public finances and the EUR, Draghi commented that “the very first thing is to calm down with the tone,” adding that he is “confident…that all parties will find a compromise solution and agreement.”[1]

National expects the EUR to strengthen over the next year once the Fed’s tightening slows down and once political issues, such as Brexit and Italy’s government disputes, are resolved. Scotiabank highlights that as planned the ECB has entered into the final stage of the end of its Quantitative Easing (“QE”) and will be wrapping up its monthly purchasing of its bonds at the end of the year, adding that the market should not expect any shift in the ECB’s key policy rate until September of 2019. BMO shared concerns over Italy’s fiscal outlook, stating that if they do not ease, President Draghi may tweak the tone on the rates guidance. The forecasting banks are in consensus that there will be no change in the key policy rate until next year, forecasting the currency pair to trade anywhere between 58.6 and 65.4 EUR¢/CAD through 2019.

With the resolution of the NAFTA agreement, the path is clear for the BoC to resume tightening its key interest rate, starting on October 24 at the scheduled policy interest rate announcement. BMO is expecting further hikes, with the momentum to continue into 2019. Overall, many of the surveyed banks correctly forecasted that the BoC will deliver a rate hike on October 24, and now expect an additional two to four rate hikes throughout 2019.

In the U.S., as highlighted by the surveyed banks, growth continues to advance robustly, forecasted to grow by roughly 3.0% this year, outpacing that of the other G7 economies. TD commented that interest rates are expected to push steadily higher, adding that the outlook is clouded by risks from trade tensions and uncertainty around the path of fiscal policy. Overall, the forecasting banks are in consensus that the Fed will raise its target rate once more this year in December, and at least two more hikes will follow in 2019. 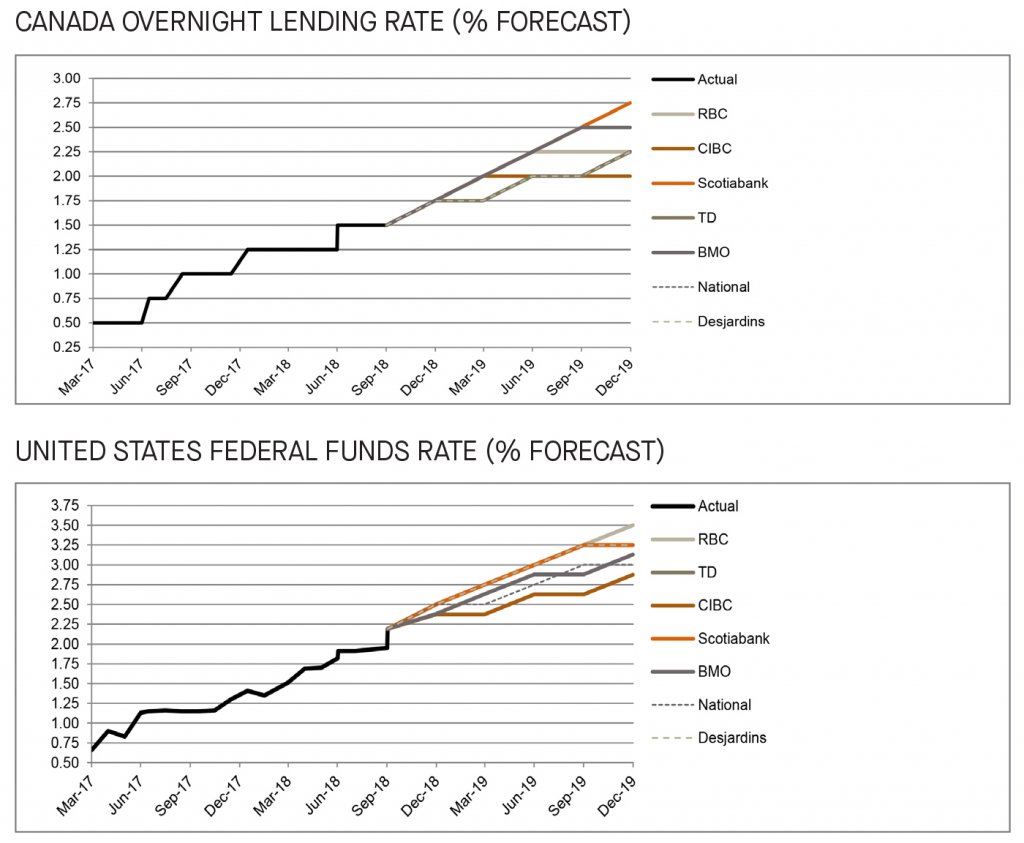 Rising yields for both U.S. and Canadian 2 year government bonds

The 2 year Canada and U.S. government bond yield forecasts show minor upward adjustments since last month’s publication. In Canada, Scotiabank highlighted that monetary policy tightening by the BoC in 2019 should result in an upward shift of the short term yield curve. In the U.S., BMO looks for flattening of the yield curve between the 2 year and 10 year bond yields, as the risk of inversion mounts where the 2 year is higher than the 10 year Treasury bond yields. Overall, the 2 year government bonds are anticipated to yield between 2.4% and 2.9% in Canada, and 3.2% and 3.6% in the United States by end of 2019. 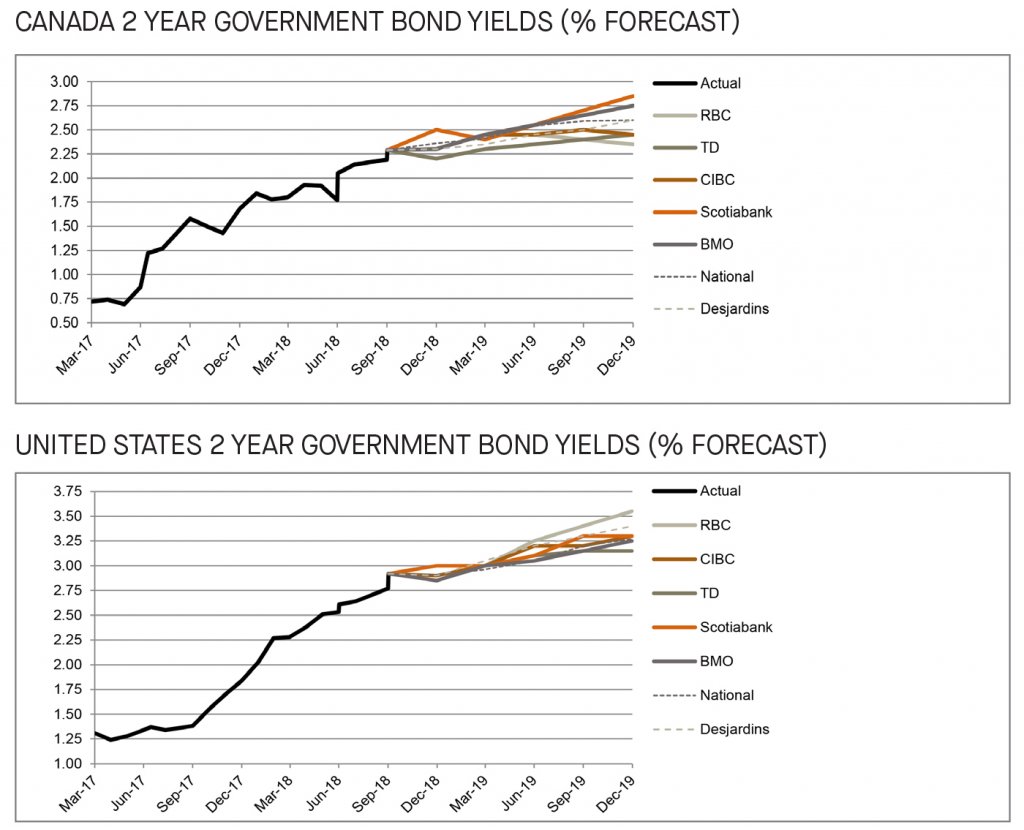 Compared to last month’s forecast, we observe minor upward adjustments by the surveyed banks. In Canada, National highlighted that with the BoC rate hike in October, the 10 year Canadian bonds yields should continue to increase through 2019. In the U.S., BMO highlighted that higher yields are to be expected citing a mounting positive output gap, a super-low jobless rate that’s primed to move lower, and inflation rate that is poised to push above target. Scotiabank has upwardly adjusted its 10 year Treasury bond yield forecast due to the rise in demand for the USD compared to other foreign currencies making it more attractive for investors relative to European and Japanese government bonds. Overall, the banks are in consensus as to the upward trend for both the Canadian and U.S. 10 year bond yields. 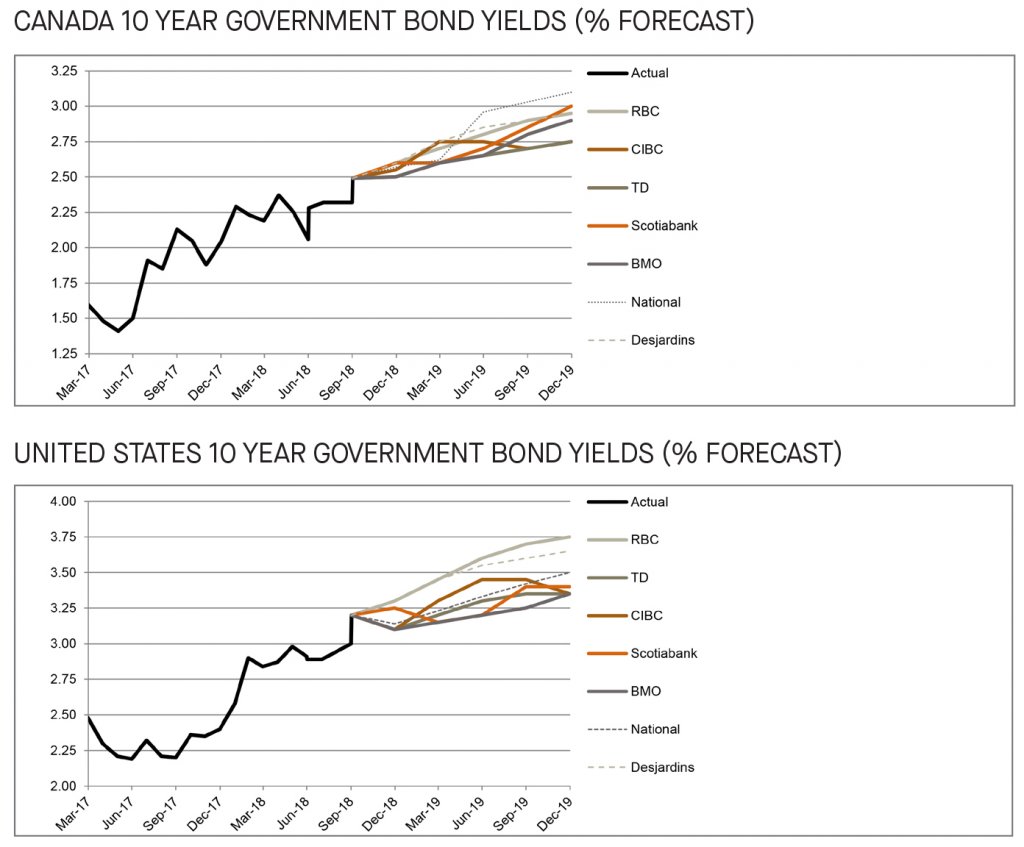 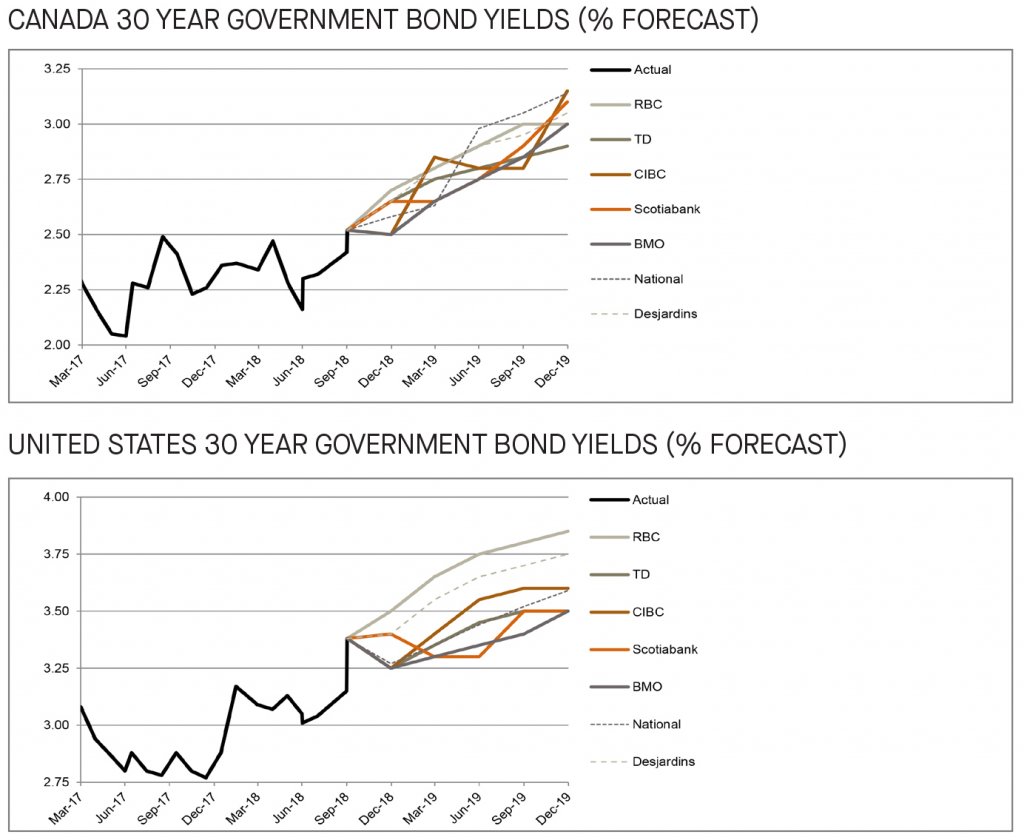 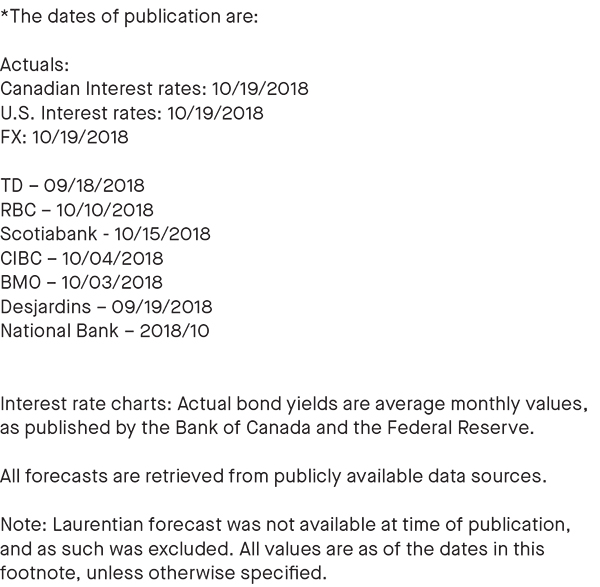