With Canada being affected by good and bad economic winds, and possible ugly geopolitical events, the dispersion of forecasts has increased markedly. This understandably demonstrates a lack of consensus by the surveyed banks and reflects the uncertainty in global economic conditions.

Although the general global economic sentiment continues to be shaky (TD Economics has downgraded its global outlook to 2.9%)[1], the Bank of Canada (“BoC”) and the surveyed banks share a common view of the Canadian economy being resilient despite all the noise. The housing market is showing improvement across the provinces; driven by lower mortgage rates and overall stronger housing demand. The labour market continues to be lively, and consumer spending is trending upward. Quebec is the breakout star with real gross domestic products (“GDP”) growth expected to hit 2.5% in 2019 (compared to a forecasted national real GDP growth of 1.8%).[2] Fun fact: Quebec has the lowest unemployment rate in Canada at 4.7% (compared to the highest rate of 13.1% observed in Newfoundland and Labrador).[3] Despite the rosy picture, the Canadian dollar lost more than 1% against the US dollar in August due to continued softness in the commodity sector and the ongoing trade war saga south of the border.[4]

The bad; recession signals continue to flicker in the United States

While there is no evidence in hard data that the US is headed for a recession, the US economy continues to be clouded with uncertainties. The US-China trade negotiations are still very much in-progress. Earlier this month, President Trump delayed the planned tariff on ‘made-in-China goods’. China’s top trade negotiator is scheduled for face-to-face negotiations in Washington next month. As the trade tension continues, so does the downward trend of the US manufacturing sector. In August, the ISM manufacturing index dropped below 50 for the fist time since the 2015 to 2016 industrial downturn.[5] Recent activities in the US market also prove to be unsettling – Barneys New York filed for Chapter 11 bankruptcy protection; Ford’s bonds degraded to junk status by Moody’s; and MoviePass (a one-time movie industry disruptor) officially shut down on September 14. Seventeen retailers have filed for bankruptcy or liquidation in the US in 2019 – and the year is not over yet. Amidst the economic uncertainty, the reporting banks lack consensus as to the outlook for the Loonie, anticipating the currency to trade anywhere between US¢/CAD 72.0 (CIBC) and 80.0 (Scotiabank) by the end 2020.

A weaker-than-expected trend continues to be a recurring theme observed across the Eurozone, particularly in Germany (where declining industrial output and arising labour market problems drive economic headwinds). On September 12, the European Central Bank (“ECB”) agreed that the economic situation called for new monetary policy support. The Brexit drama is still ongoing in the UK. Prime Minister Johnson is set to exit the European Union (“EU”) next month (on Halloween), despite the Members of the Parliament (“MPs”) passing a bill that could extend the deadline into 2020. A no-deal Brexit (i.e., the UK would leave immediately without a divorce plan with the EU) could still potentially be on the table on October 31. A no-deal Brexit is sure to have an adverse effect on the UK and EU – politically, economically, and financially. All these uncertainties have clouded the Eurozone’s near-term outlook. The Loonie stands to benefit in relative terms as the EUR weakens, with the reporting banks anticipating the currency pair to trade anywhere between EUR¢/CAD 62.0 and 70.0 by the end of 2020.

On September 4, the BoC kept its policy rate at 1.75%, echoing the sentiment of the surveyed banks of the Canadian economy being resilient. That said, the surveyed banks further commented that the recent global political and trade tensions would likely have an effect on Canada. Per the BoC, while the current policy stimulus “remains appropriate” for now, it will continue to monitor the evolving international conditions ahead of its next meeting in October. Thereafter, on September 18, the Federal Open Market Committee (“FOMC”) cut the target range for the fed funds rate by 25 basis points (“bps”) to 1.7% to 2.0% in the US. Overall the surveyed banks lack consensus regarding the next move by the BoC, but they are generally in agreement that the Fed will likely cut once more by the end of 2019. 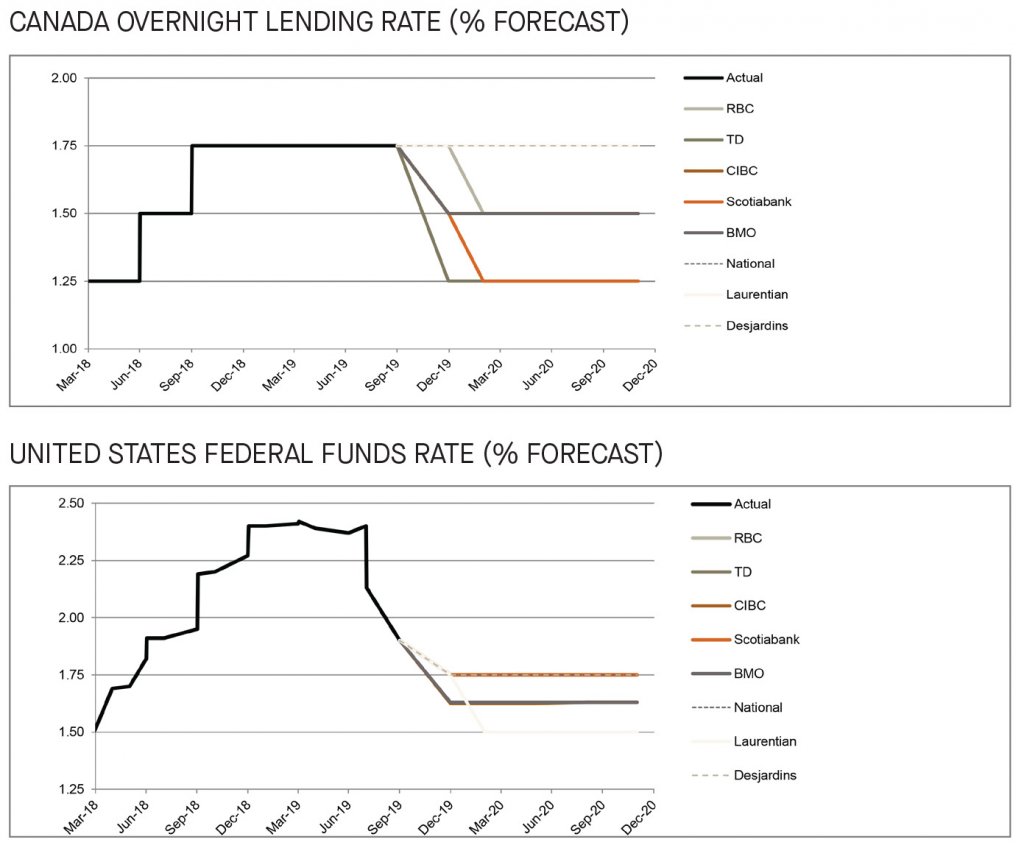 The 2-year government bond yields have surged since the beginning of September in both Canada and in the US. As noted by Desjardins, although the future global economic environment remains uncertain, the easing of the trade tensions between the US and China proved to create positive investor sentiment which manifested in the bond markets through rising yields. Overall, the surveyed banks are in consensus that the 2-year bond yields shall steadily rise over the forecast horizon in both Canada and the US. The surveyed banks expect the 2-year government bond yields to range from 1.2% to 1.6% in Canada, and 1.5% to 1.7% in the US, by the first quarter of 2020. 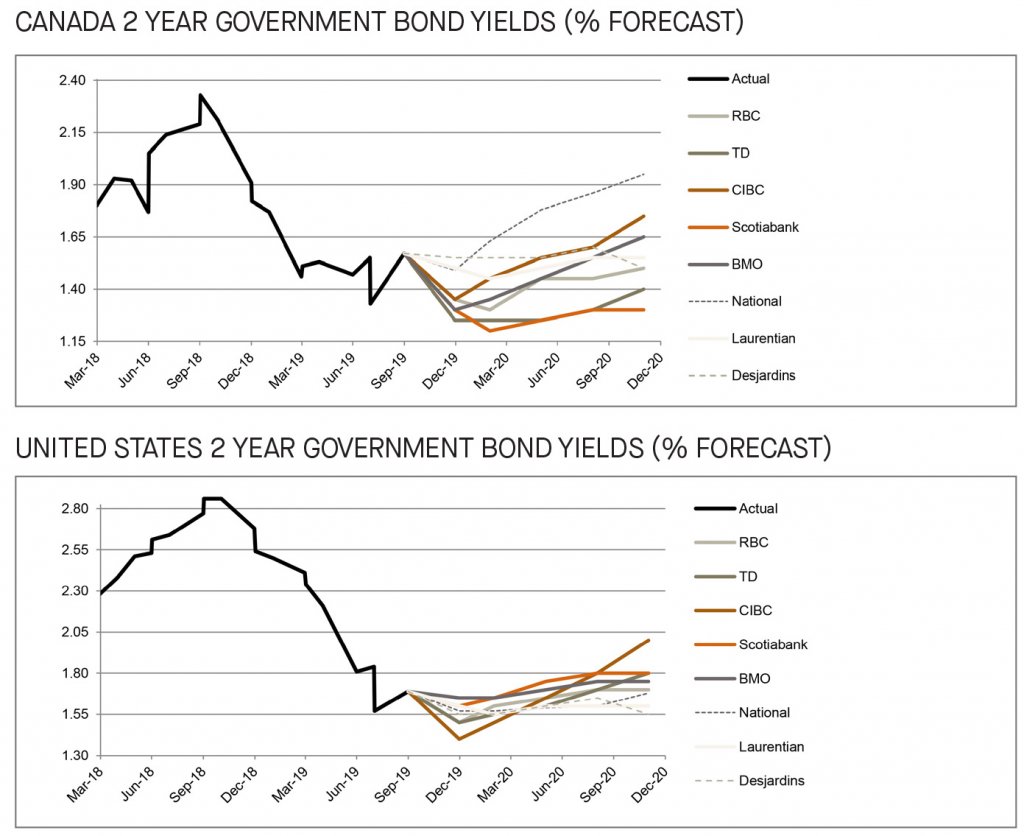 As at the date of this publication, the 10-year government bonds yielded 1.4% and 1.7% in Canada and in the US, respectively, showing a slight improvement since last month’s publication. Consistent with last month’s observation, the 10-year Canadian and US government bond yields continue to trend downward as a reflection of the growing concerns regarding the trade war and its impact on global growth. RBC highlighted that the 10-year US Treasury yields fell by 52 bps in August – the second largest monthly decline in the last decade. The surveyed banks expect the 10-year government bond yields to be between 1.3% to 1.8% in Canada, and between 1.7% to 1.9% in the US, by the first quarter of 2020. 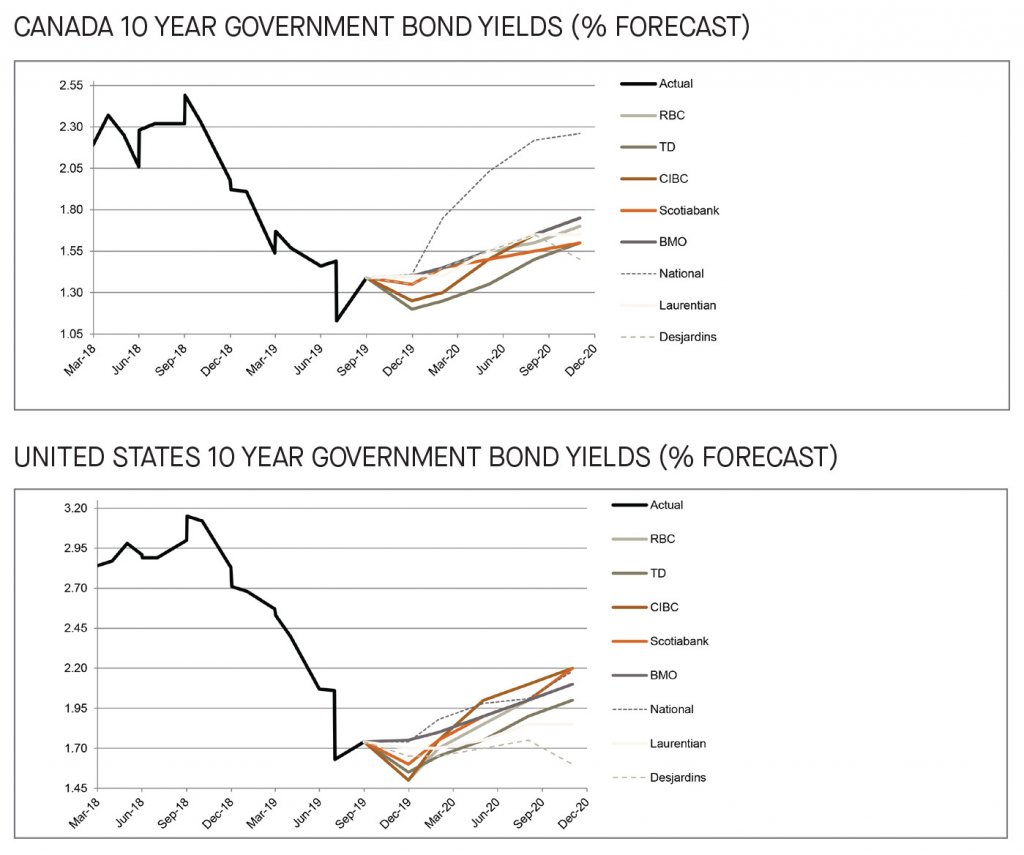 Consistent with our observations in our last publication, the long-term implications of political upheaval, and a highly uncertain global economic outlook are keeping the long-term bond yields generally low. The surveyed banks expect the 30-year government bond yields to be between 1.6% to 1.9% in Canada, and between 2.1% to 2.4% in the US, by the first quarter of 2020. Such yields are only marginally higher than their 2- and 10-year counterparts, signalling weak economic confidence in the longer end of the yield curve. 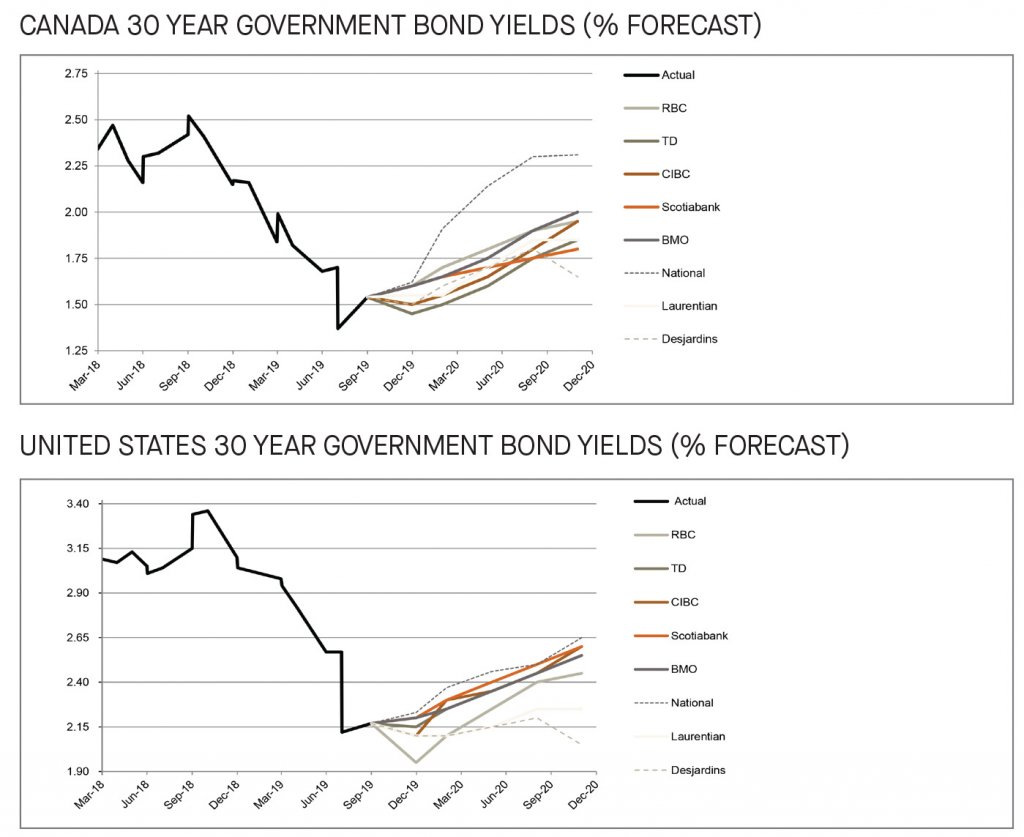 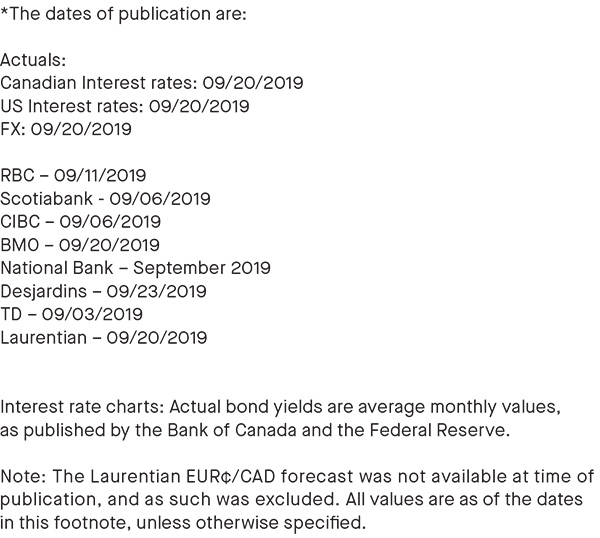