Cannabis stocks experienced another roller-coaster year in 2020, commencing with a steady decline into February, a sharp decline after the onset of COVID-19 in March, and then amerger recovery aligned with the broader market in the latter half of the year. The industry benefitted overall from cannabis being deemed an “essential good” in most North American regions during COVID-19 lockdowns as well as from positive US political developments later in 2020.

It wasn’t all bad news however, as sales of adult-use cannabis in Canada continued to see steady monthly growth to $260M-$270M by the end of the year. This represents an annualized adult-use industry of approximately $3.5B, which is approaching industry size estimates prior to recreational legalization in Canada of approximately $6B. The increase in monthly sales came as Ontario, Canada’s most populated province, reached ~300 stores open by end of the year (compared to ~500 in Alberta) and is estimated to control ~40% of the recreational (including illicit) market. 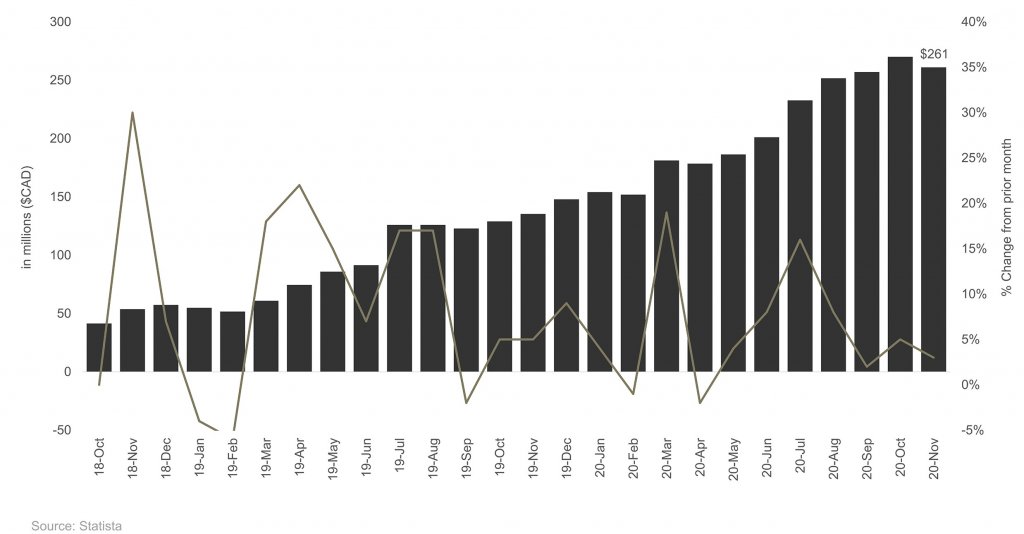 Meanwhile in the US, many cannabis companies are thriving, and generating significant revenue growth, profit, and cash flow from operations all while operating in a federally illegal market. To-date, US multi-state operators (“MSOs”) have been successful by focusing on their core markets and selectively expanding into new states as legislature permits. Additionally, 2020 saw an increase in the number of ancillary cannabis companies whose operations are not plant-touching but are anticipated to participate in – and benefit from – the growth predicted for the adult-use US market in the coming years.

It remains to be seen how prolonged COVID-19 lockdowns will impact the cannabis industry in 2021; but before discussing what may come next, let’s dive deeper into 2020.

In both Canada and the US, equity raises decreased sharply compared to 2019, likely a result of continued underperformance by most cannabis companies (compared to forecast expectations) and the economic uncertainty caused by COVID-19. This situation slightly improved in the latter half of 2020 as markets recovered from the March COVID-19 contraction, highlighted by US MSOs such as Harvest Health and Ascend Wellness raising approximately US$35M and US$68M, respectively, through private placements.

While there were limited equity raises in 2020, lenders became increasingly willing to issue traditional debt instruments to cannabis companies which allowed for increased access to capital that was not available in prior years. The following are a few noteworthy debt raises in 2020:

The key takeaway from 2020 capital raises is that despite the volatility and short-term dips, institutional lenders are increasingly entering the industry through debt and equity issuances and in some instances, lenders are now willing to lend based on future cash flow and not just capital assets (i.e., production facilities). These are positive developments for cannabis companies seeking growth capital in 2021.

Consistent with the decline in equity raises, M&A activity also experienced a significant decline in 2020, although this was partially offset by an increase in activity in the latter half of the year. The largest transactions announced in 2020 were the following:

Most of these transactions were announced in the latter half of the year and have yet to be completed. With stock prices continuing to rise in the first month of 2021 there remains some risk that shareholders do not approve these transactions. Regardless, 2020 will be remembered as a down year for M&A in the cannabis industry.

We have summarized in the tables below key financial metrics and trading multiples for the ten largest cannabis companies in Canada and the US (based on market capitalization) as at December 31, 2020.

As evidenced in the data, US MSOs continued their trend from 2019 and traded at a premium to Canadian LPs based on current and expected revenue. Canadian LPs continue to generate significant losses and are mostly forecasting this to continue into 2021 whereas in the US, the top 10 MSOs have combined to generate approximately $500M in EBITDA based on last-twelve months results and this is expected to increase to $1B for fiscal 2020 once year-end results are released. We also note the largest MSOs are trading at a premium to small-to-mid cap MSOs, which may represent a value play for investors seeking to enter the US cannabis industry.

Overall, Canadian and US trading multiples should converge with adjacent industries (i.e., tobacco, alcohol, and pharmaceuticals) and approach reasonability in the coming years (based on 2021 and 2022 revenue). However, this will only occur if companies are able to execute on their forecasts, which prompts the question: will companies capitalize on the current tailwinds supporting the industry and maintain their focus to finally meet or exceed expectations?

Another perhaps overlooked but reasonably priced investment strategy that will likely grow alongside the core cannabis industry. This sector represents non-plant touching companies outside of the core value chain (i.e., cultivation, processing / manufacturing, retail), which has seen increased investment activity in 2020 (i.e., Silver Spike acquisition of Weedmaps) and is not subject to the same federal restrictions as plant touching operators. The tables below highlight the discount to which ancillary cannabis companies trade in relation to the overall industry despite likely participating in the expected forthcoming growth.

No article can discuss 2020 capital markets activity without mention of the emergence of Special Purpose Acquisition Corporations (“SPACs”) focused on the cannabis industry. SPACs are companies formed to raise capital in an initial public offering (“IPO”) with the purpose of using proceeds to acquire businesses or assets. SPACs are required to deploy most of their capital in a busines combination within a set period after the IPO (usually within 24 months) or return the capital raised to shareholders.

Our analysis indicates SPACs focused on the cannabis industry have raised approximately US$1B in cash that will need to be deployed in 2021 which should help fuel M&A activity in the coming year.

All eyes are now on US Congress. On February 1st three leading champions of marijuana reform announced that the issue will be prioritized in the new Democratic Senate this year and that there are plans to release draft legislation in the coming weeks to begin a conversation about how federal policy will change and evolve. How this legislation advances will be critical to how the industry develops. While most people use legalization and decriminalization interchangeably, they are quite different:

There is no consensus of what the future holds on the legalization or decriminalization debate when speaking to industry insiders. While the majority of Americans believe that cannabis should be legalized, it remains a highly political issue with a partisan divide. This is driven by the many issues that need to be addressed through various pathways including but not limited to: taxation regimes and overall economic impact at the municipal, state and federal levels; expungement of prior criminal charges for minor cannabis offenses; racial equality in future industry participation; and, potential risk of increased usage, particularly amongst youth.

Views on Cannabis Legalization in the US 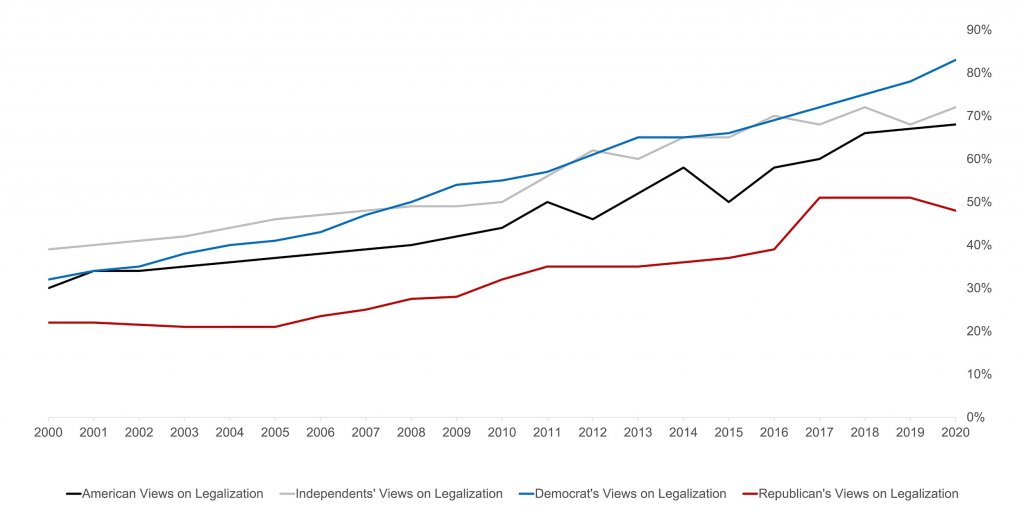 While a blend of political, social, and economic demands will drive Congress’ actions, current industry operators must critically analyze the impact of either scenario on their businesses. Without a doubt, legalization will be a boon to the industry and remove impediments such as the punitive 280E tax rule as well as the ability to conduct interstate trade. However, many MSOs have built similar assets across legal states, which will likely become redundant after legalization and may result in fire sales or write-downs which may have a material, albeit short-term, impact on
financial results.

Despite the slowdown in 2020 – certainly exacerbated by the uncertainty caused by the COVID-19 pandemic – 2021 has started off on a major “high” note with several large M&A deals and capital raises announced in January.

Additionally, 2021 M&A activity should continue to increase driven by other factors such as SPACs deploying their capital, companies with strong balance sheets consolidating the market by acquiring distressed and underperforming companies, and small-to-mid cap companies merging to compete against large players.

The emerging cannabis industry is quite different from other emergent industries in recent history. The advent of social media and smartphones created entirely new industries, sectors, adjacencies, services, and user experiences that we didn’t know we needed until it was available. Unlike these, cannabis has existed for centuries and only in the last century went underground as an illegal substance. This means the growth, evolution and maturity curve of the industry is highly accelerated and, in response, executives must superimpose a start-up and mature company mentality to have both the agility to rapidly respond to industry changes as well as drive performance akin to adjacent industries.

Ultimately this means that operators must quickly professionalize their businesses or risk failure and obsolescence. Earlier we discussed how Canadian LPs are rationalizing both their facilities and headcounts to improve performance and stem future financial impairments / losses. While the US MSOs have avoided some of the missteps of Canadian LPs and are arguably being more thoughtful on how they keep pace and capture their share of the rapid market growth, there are a few areas that will likely separate the winners and losers as the industry’s legal and regulatory structures are finalized.

Due to regulatory evolution and differences, cannabis operators often continue to try to service multiple sectors within the cannabis industry – adult-use, medicinal and health and wellness – often predicated on an operating asset base that blends cannabis and hemp cultivation activities. In addition to the regulatory differences across these sectors, the core competencies of the underlying businesses are fundamentally different and should not be blended into a uniform business model. Future winners will be those that pick their desired sector and develop a coherent and reinforcing business model built upon the required foundational capabilities.

Many operators treat cannabis as a monolith consumer category, when in reality, it is a commodity input for products that should be designed to satisfy and delight consumers across a spectrum of unique moments and experiences. Often compared to alcohol, it is seemingly more complicated to segment cannabis consumers and develop unique experiences due to the differences across strains, cannabinoid and terpene profiles and consumption form factors. Future winners will be those who proactively invest in sector and consumer research and create focused brands and products for their target consumers and their consumption habits.

As mentioned, an M&A wave is building and many executives are watching with great interest for opportunities to leverage this tool to build their businesses. But M&A is simply that: a tool and a tactic, not a strategy.

As we have learned from the Canadian experience, mergers and acquisitions to reach a critical mass invites the (often false) belief that size matters and that owning and operating all segments of the value chain is the key to success. Although the future is uncertain, there are small-to-mid-sized Canadian LPs that have realized they will not win against the biggest players by trying to reach their perceived scale, but have instead implemented cost controls dovetailed with consumer and product focus to improve financial performance. Future winners will be those who use their equity and capital reserves to execute a purposeful corporate strategy that leverages M&A to acquire and / or enhance their foundational capabilities tied to their prudent selection of sector and consumer focus.

The cannabis industry will remain exciting yet volatile for the foreseeable future. While nobody knows definitively what 2021 will bring, COVID-19 has forced the recognition of cannabis as an essential good, which will likely contribute to continued industry growth and capital markets activity. With strong growth forecasts comes increased investment and the rapid rise and fall of industry operators leading to an inevitable industry shake-out. We expect the winners to emerge from the shake-out to be those who invested time and resources into developing coherent corporate, market, and consumer strategies supplemented by pragmatic capital deployment that reinforce the underlying critical capabilities and systems that are required to execute.

We use cookies to ensure that we give you the best experience on our website. If you continue to use this site we will assume that you are happy with it.Ok