Greenback continues to strengthen against Loonie

Overall, the Loonie remained range-bound versus the Greenback for the fourth consecutive month on the heels of declining oil prices. However, positive Canadian economic data provided some reason for optimism as the CPI inflation measure surprised by rising to 2.4% (versus an expected 2.1%).[1] The inflation surprise helped the Loonie reverse some of the relative depreciation and gives some hope that the Bank of Canada (“BoC”) may adopt a less dovish tone. A more hawkish BoC would bode well for the Loonie given that many other monetary authorities, notably the Fed, are becoming increasingly dovish.

The Trump administration continued its protectionist actions by raising tariffs on nearly $200 billion in Chinese imports and taking aim at Mexico by threatening to impose tariffs on all imported goods unless the Mexican authorities adopt measures to address immigration issues. Scotiabank commented that should trade situations deteriorate further, the Fed is likely to cut interest rates to safeguard the U.S. from the “damage caused by Mr. Trump”. RBC added that the recent tariffs signaled both that trade agreements [USMCA or NAFTA 2.0] provide little protection against protectionism, and that tariffs might be used as a stick even outside the realm of economic policy. Overall, the surveyed banks lack consensus as to the future value of the CAD/USD currency pair, expecting it to trade between 72.0 and 80.0 USȼ/CAD through 2020.

The European Central Bank (“ECB”) ruled out raising interest rates through at least the first half of 2020 in early June. The decision was followed by dovish comments hinting at additional stimulus from ECB’s President Mario Draghi.[2] Later in the month, Draghi added that the ECB is ready to cut rates again and that additional quantitative easing could be in the pipeline if inflation fails to reach the ECB target.[3] Unsurprisingly the dovish monetary rhetoric led to a sharp decline in the EUR and even evoked protectionist trade rhetoric from President Trump who broadly noted that the EUR’s weakening currency makes it difficult for the U.S. to remain competitive on trade.

National highlighted that the extension of the loose monetary policy by the ECB and threat of U.S. tariffs on European goods do not bode well for the relative strength of the EUR – correspondingly National trimmed its EUR forecast. RBC added that the Eurozone’s economy is faced with a lack of momentum and growing downside risks, adding that Germany’s industrial sector is getting the worst of it. BMO noted that the rising possibility of a rate cut, along with a potential clash between Italy and Brussels will keep a lid on the EUR. Overall, the surveyed banks are largely pessimistic on the relative strength of the EUR, forecasting the EUR¢/CAD to trade between 58.0 and 67.6 through Q4 2020, at or below current levels.

With Canadian CPI measures coming in above expectations, the BoC is expected to remain on the sidelines as many other central banks are become accommodative. In the U.S., the Fed maintained its key interest rate, indicating there will not be any rate cuts in 2019; however did not rule out one or two rate cuts tabled in 2020.[4] Fed Chair Jerome Powell added that “many participants now see the case for somewhat more accommodative policy has strengthened.”[5] BMO lowered its Fed policy rate forecast by forecasting a rate cut at the July and October meetings while noting trade-risk and inflation as the driving factors. Overall, the surveyed banks are in consensus that the BoC will hold its key interest rate at 1.75%, and several reporting banks (CIBC, TD and BMO) expect at least one rate cut by the Fed by Q4 2019. 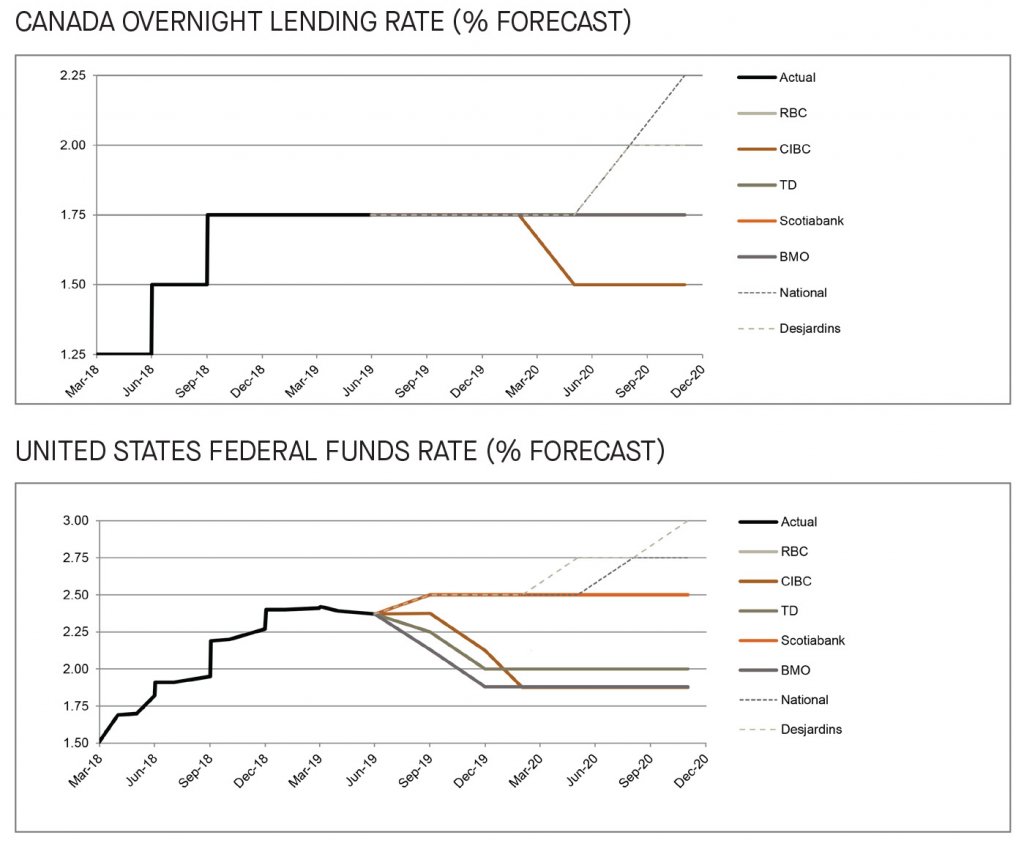 2-year bond yield forecasts adjusted lower in both Canada and the U.S.

Compared to last month’s publication, we observe downward forecast adjustments made by most of the surveyed banks. Scotiabank highlighted that the global trade uncertainty has significantly affected markets and correspondingly made downward revisions to both its Canadian and U.S. short term yields forecasts. BMO anticipates the U.S. 2-year bond yields to run well below the Fed’s target, attributing the banks downward adjustments to the rising trade tensions which have increased the potential for Fed rate cuts this year. Overall, the 2-year government bonds are anticipated to yield between 1.3% and 1.8% in Canada, and 1.7% and 2.5% in the United States by end of 2019 – well below the forecasts made earlier this year. 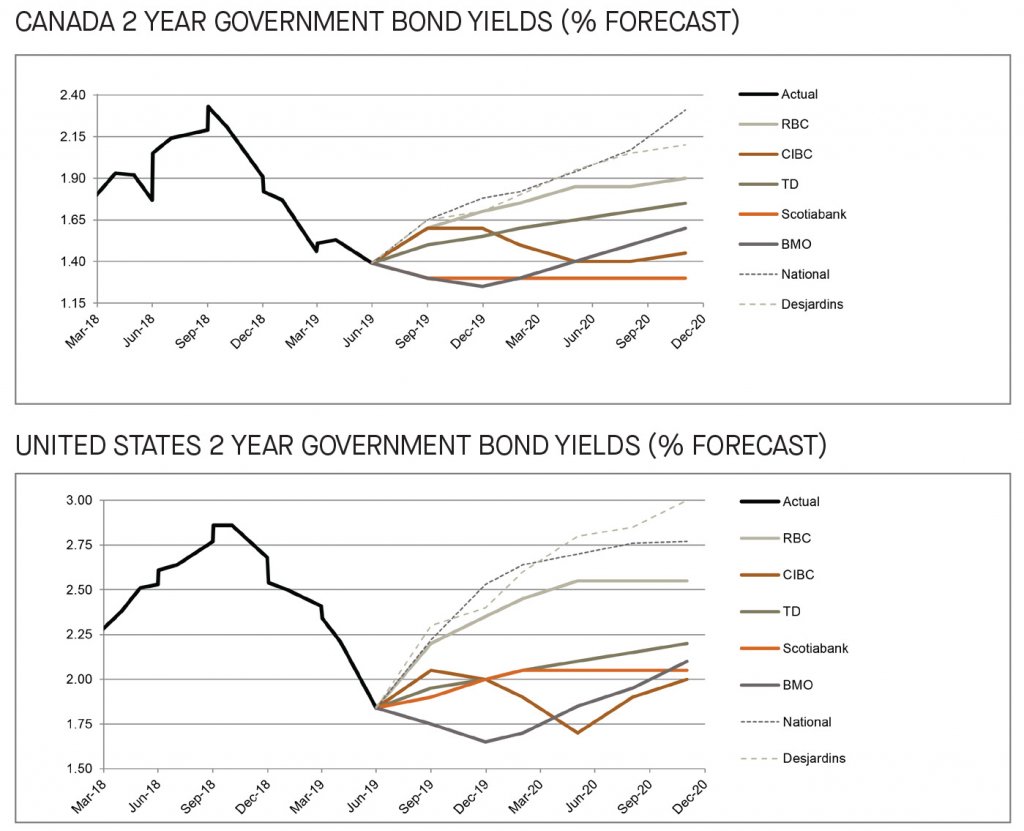 The 10-year bond yields have significantly decreased since September 2018, now trading at 1.4% in Canada and 2.1% in the U.S. as at the date of publication. RBC noted that the 10-year U.S. treasury yields have decreased to more than one percentage below last year’s high and are edging closer to 2017 lows. National believes the G20 meeting on June 28-29 could be a turning point for the U.S. economy where they see the possibility of trade tensions easing.  National expects the 10-year U.S. bond yields to pick up and finish the year at around 2.8% – well above current levels. Overall, with the exception of BMO, the surveyed banks are generally in consensus that much of the decline in yields is over and expect the 10-year government bonds to yield between 1.4% and 2.0% in Canada and 2.0% to 2.8% in the U.S. by the end of 2019. 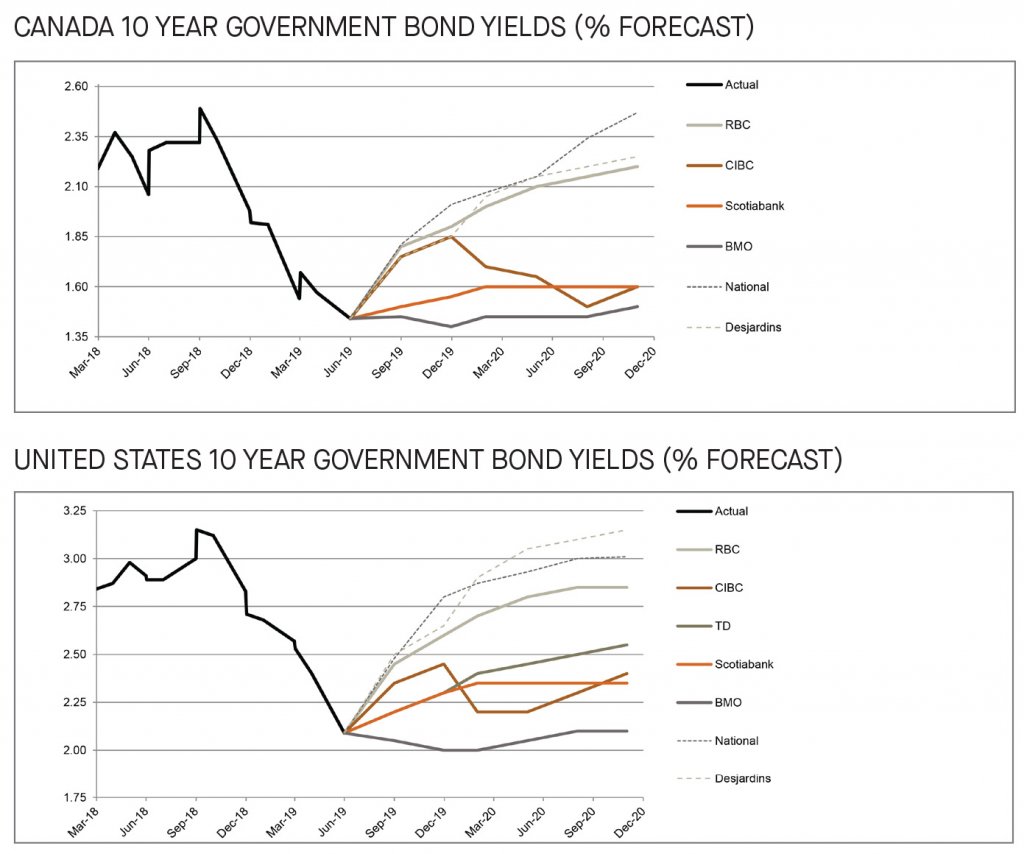 Since last month’s publication, the U.S. and Canadian long-term bond yield-forecasts have been revised slightly downwards, consistent with revisions observed in shorter-term bond yields. Global trade uncertainty remains a significant factor contributing to the expectation of lower yields than in prior forecasts. Overall, the expectation of an upward trend for Canadian and the U.S. long bond yields remains intact, albeit at a tempered pace. National is on the high-end of the Canadian forecast, while Desjardins is on the high-end of the U.S. forecast, expecting the long bond yields to rise to 2.2% and 3.1% by end of 2019, respectively. 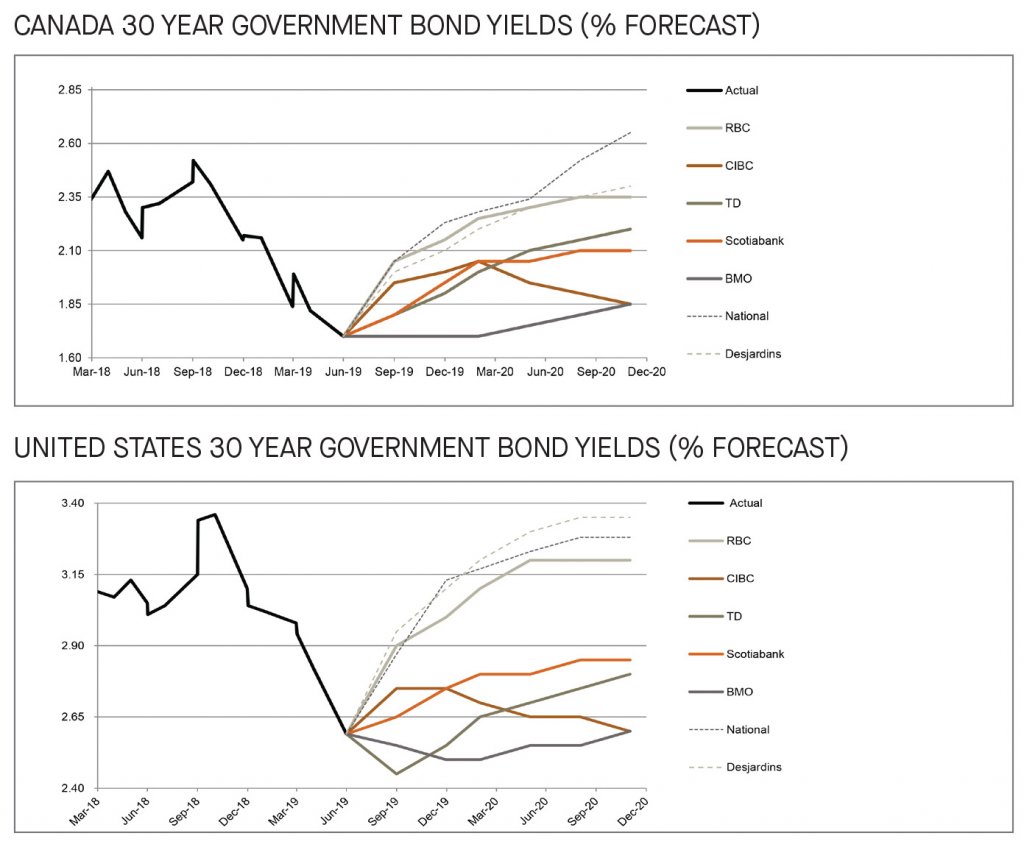 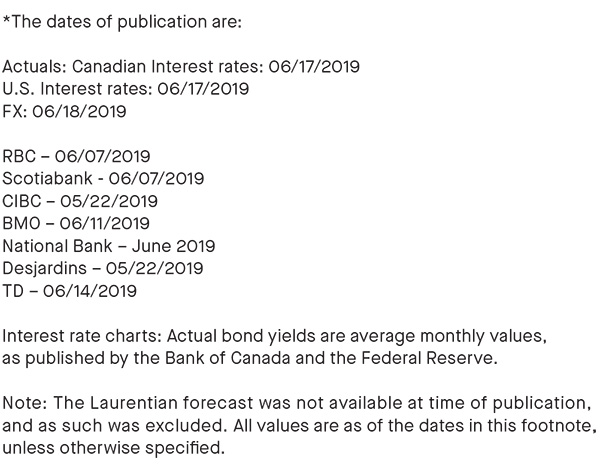