October has been an eventful month in Canada, the US, and in the Eurozone. The surveyed banks are in general consensus that the outcome of recent developments is likely to blur the economic outlook even further.

The labour market continues to be strong, consumer confidence remains high, and the services sector looks to be in full power. RBC notes, however, that the manufacturing sector is unsurprisingly losing steam on the heels of the global slowdown in industrial production growth. In Canada, the Liberals secured a minority government on October 21st and in doing so, pledged to increase government deficit to $27.4 billion next year to fund new campaign promises. Some investors and analysts expressed concerns over the deficit increase and overlooked the energy sector; while others feel that a minority government will force parties to come together and make compromises in the broader interest of Canadians.

On October 11, the US and China finally agreed to phase 1 of a trade deal in which China committed to purchase approximately US$50 billion of American farm goods per year. American officials have not specified which products would be purchased, or how they arrived at the US$50 billion figure, but President Trump reassured that the “farmers will figure it out”. The market’s reaction to the deal has been mild, with US and China delegates expected to meet again in November to finalize discussions. The economies of both the US and China have slowed since the trade tensions escalated over a year ago, with manufacturing and agriculture sectors feeling the pinch.

While economic uncertainties continue to weigh on the outlook, National comments that if we see “a truce in the US-China trade, oil prices would get a lift as investors become less pessimistic about the global economy and prompt markets to reduce expectations of Bank of Canada rate cuts, giving a lift to the Loonie in the process”.

At publication, the surveyed banks’ forecasts remain largely unchanged as the currency pair is expected to trade between 72.0 (CIBC) and 80.0 (Scotiabank) US¢/CAD by the end of 2020.

Boris Johnson was mocked by activists as he failed to deliver the October 31 deadline to exit the European Union. As global growth continues to falter and the UK’s divorce from the European Union remains uncertain, the Bank of England (“BoE”) is contemplating further monetary stimulus (through QE and another rate cut by the end of the year) – adding to the existing trade woes of the Eurozone. With its relatively high global value chain participation, Europe has been feeling the burn from the disruption of trade flows. Mario Draghi’s pending departure as the European Central Bank (“ECB”)’s President is leaving officials with the fear that the financial stimulus program previously announced would be ineffective, jeopardize the stability of the financial sector, and allow too many unproductive companies to survive.[1] Given there has been little improvements in the Eurozone economy, the EUR continues to be weak. While a truce in the US-China trade talks will likely benefit the EUR as well, Brexit, monetary stimulus, and potential US tariffs on imports of European goods would likely cap the EUR’s relative strength upside. The surveyed banks anticipate the pair to trade between 62.1 (CIBC) and 69.7 (Desjardins) EUR¢/CAD by the end of 2020.

To date, the BoC has resisted pressure and has not adjusted its key interest rate since October of 2018. Majority of the surveyed banks are attributing the BoC’s status quo policy stance to the performance of the Canadian economy. Although trade uncertainty remains a significant risk, the economic data to-date suggest a rate cut will not be necessary for the remainder of 2019. Overall the surveyed banks believe the BoC will stay put until 2020. On the other hand, the US has experienced growth slowdown, and the trade war with China is still not fully resolved. Consensus amongst the surveyed banks is that a third rate cut by the Fed during 2019 will likely happen as insurance. 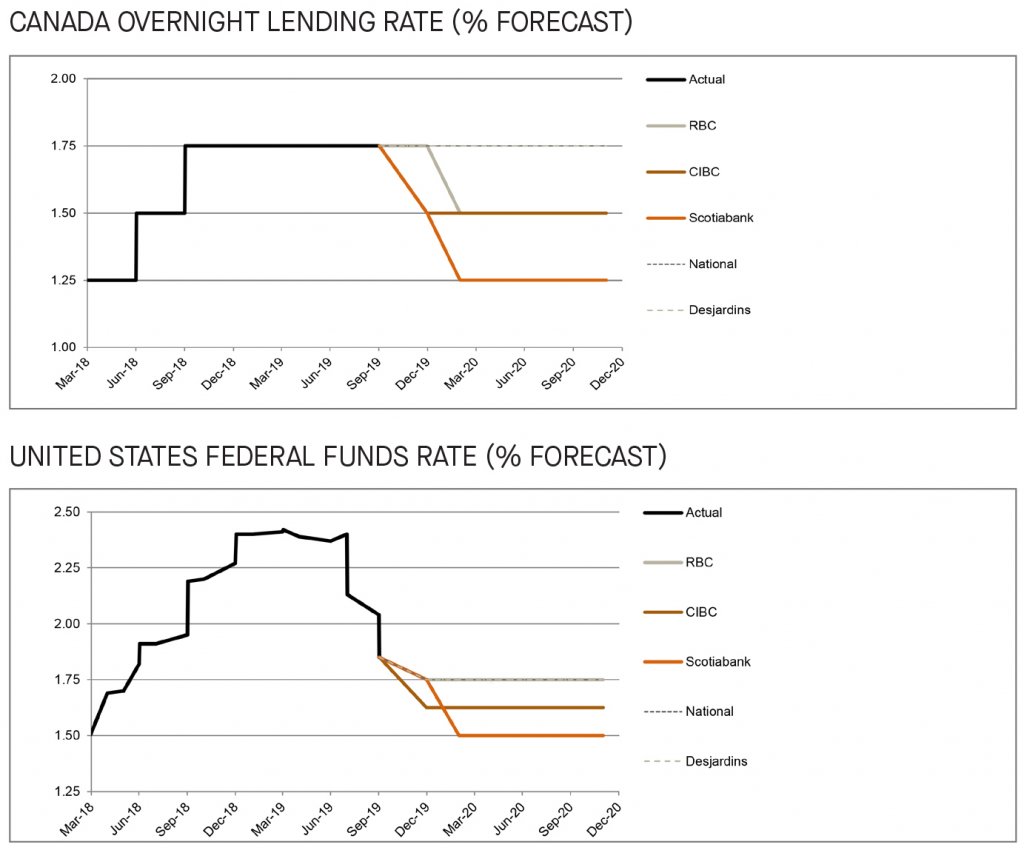 At publication, the 2-year bond yielded 1.6% in both Canada and the US. As shown in the diagram, the surveyed banks seem to be in consensus that the 2-year bond yields, for both Canada and the US, will dip in the last quarter of 2019 (compared to Q3 of 2019) but gradually rebound in 2020. The forecast is likely linked to the anticipated outcome of the October events and the overall market uncertainties. The surveyed banks expect the 2-year government bond yields to range from 1.2% to 1.6% in Canada, and 1.5% to 1.7% in the US, by the first quarter of 2020. 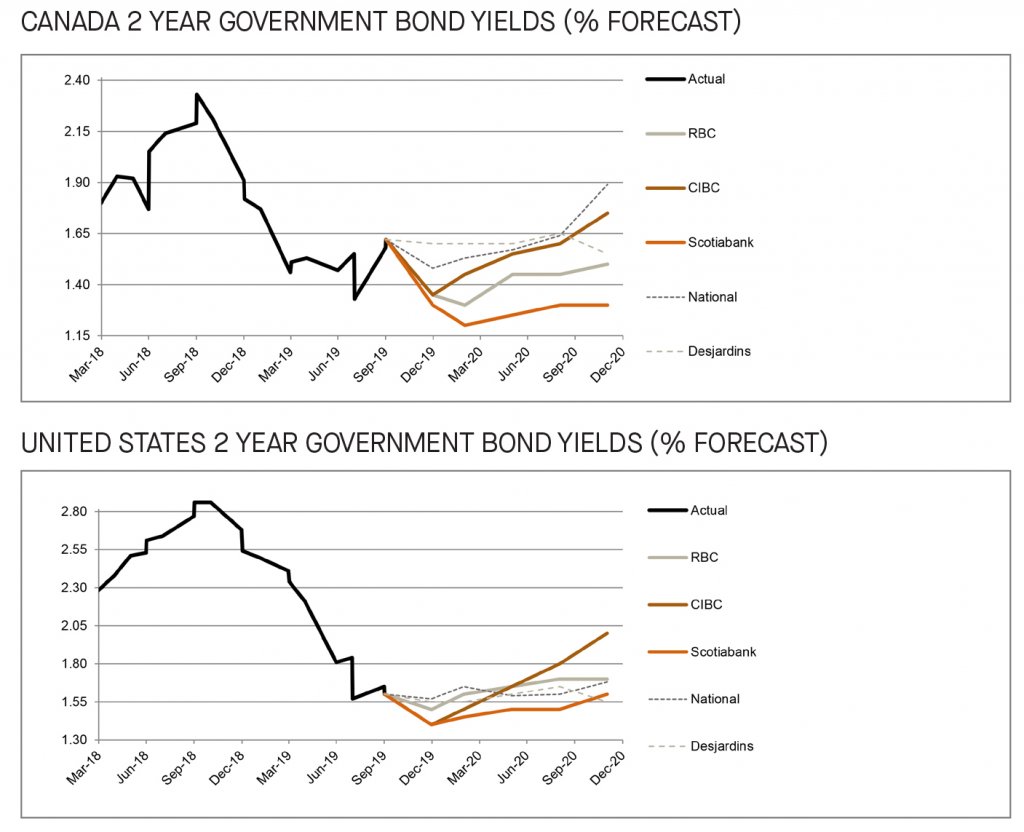 At publication, the 10-year bond yielded 1.5% in Canada and 1.8% in the US. Similar to the 2-year bond yields, the surveyed banks also seem to be in consensus of the same dipping trend for the latter quarter of 2019 (compared to Q3 of 2019) with a gradual normalization in 2020. The forecasted dip is linked closely to the significant decline of the ISM (Institute for Supply Management) index at the beginning of October, which drastically impacted the 10-year US treasury yield. As noted by National Bank “the yield fell from 1.8% in the morning to 1.6% by end of day, increasing investors concern about the global economy”.[2] The surveyed banks expect the 10-year government bond to yield between 1.3% and 1.6% in Canada, and 1.6% and 1.9% in the US, by the first quarter of 2020. 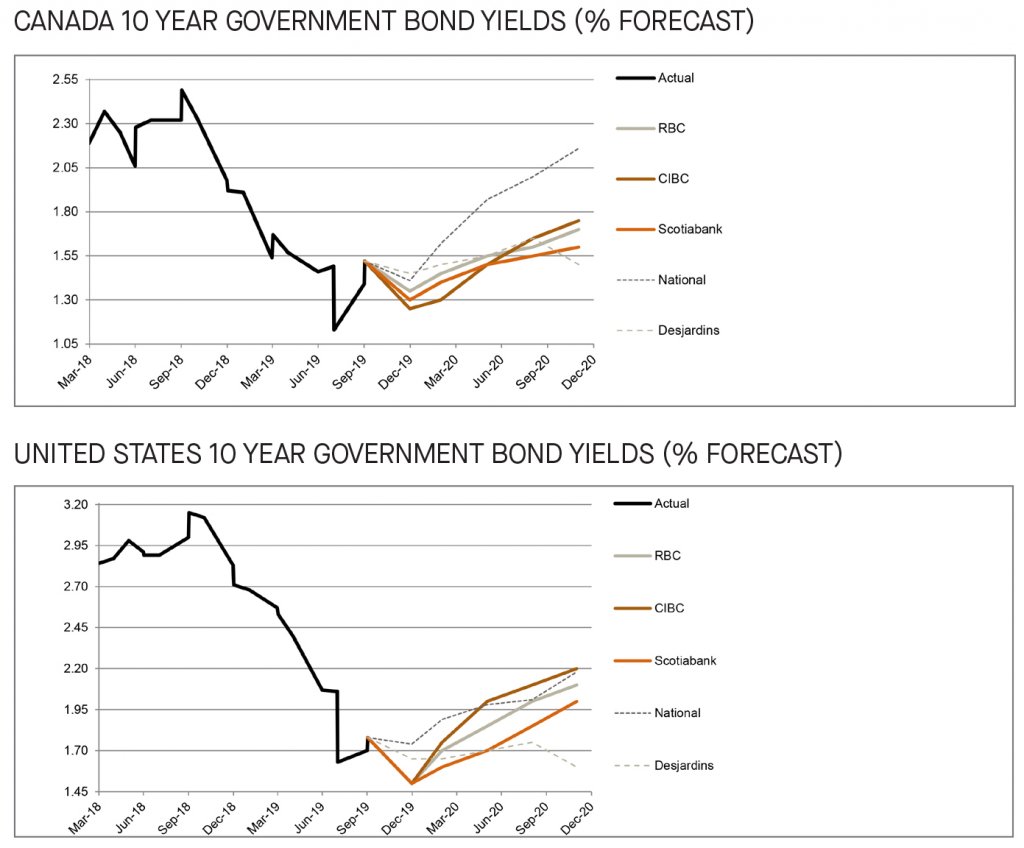 At publication, the long-term bond yielded 1.6% in Canada and 2.3% in the US. A comparison of the observed Canadian short-term (1.6%), medium-term (1.5%) and long-term (1.6%) bond yields show compression and a minor inversion, which could suggest an economic slowdown. A comparison of the observed US short-term (1.6%), mid-term (1.8%), and long-term (2.3%) bond yields echo the sentiment that a highly uncertain global economic outlook is keeping the long-term bond yields generally low. The surveyed banks expect the 30-year government bond to yield between 1.6% to 1.8% in Canada, and 2.1 to 2.3% in the US, by the first quarter of 2020. 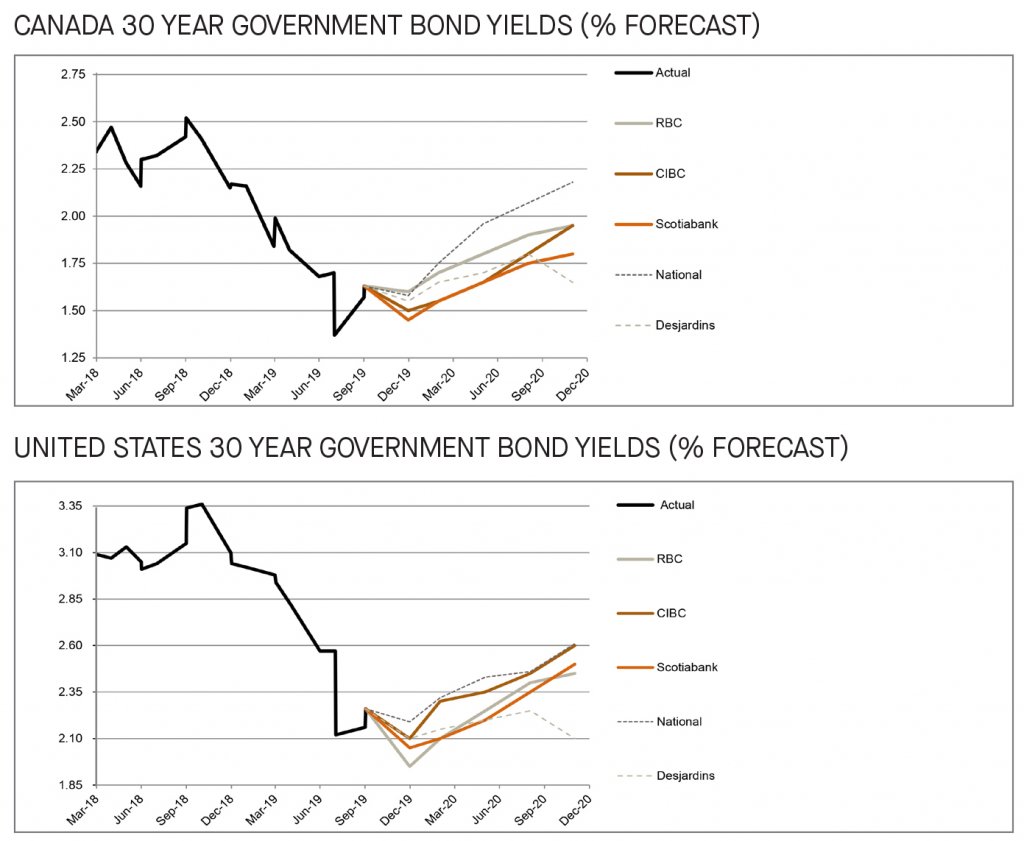 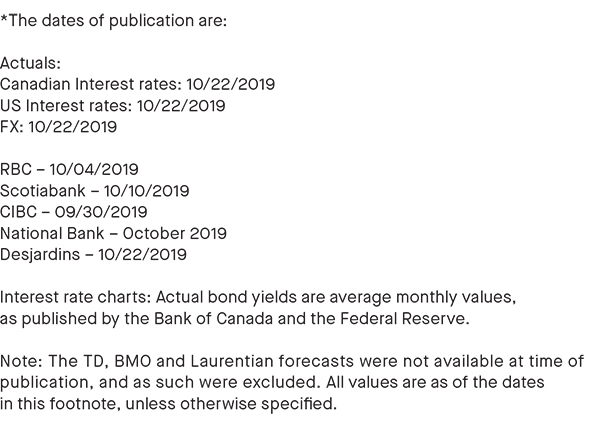